Perhaps it's age, but I can't recall if it was midgey when I packed up this morning or perhaps it's because I was now inured to the beasts. Stop. That's not possible. It must have been okay. I do remember packing away a bone-dry tent. I like this Cuben fibre stuff - or whatever it's called these days - as it doesn't absorb any water. If it's been raining all it needs is a quick shake and you're packing her away.
When I say her I mean that she is definitely female. It's the correct pronoun. As I strolled away this morning I thought it was very odd that she hadn't been named properly yet. In the past I've slept with and adored various shelters - Trinnie Trailstar, Wanda Warmlite, Nelly Nallo and Maud Akto. I know the Akto's name doesn't exactly slip off the tongue but it was Maud Blomqvist who sewed my Akto together in Sweden some twenty six years ago, and who stitched her name onto the inner tent. I often wondered about Maud and what life in Sweden was like for her, sewing away at her machine all those years ago. I pensioned Maud Akto off to Phil's nephew and apparently she is still providing sturdy service.

I've been toying with 'Natalie Notch'. It would have to be the full unabbreviated Natalie, and certainly not 'Nat'. Nat Notch just sounds plain wrong. We'll see how we get along with Natalie then. I'm already growing quite fond of her even though we've spent just six nights together - four on the Challenge so far and a couple on the Imber Range Perimeter Path back in September of last year.

Here's today's walk - a nice stroll taking in some more of Glen Banchor then dropping down into Newtonmore to visit whoever's running the hostel for a cup of tea and then the final amble along the cycleway to The Cross at Kingussie for plutocratic pampering.

I'd noticed some really heavy duty fencing on my way down Glen Banchor yesterday afternoon and this morning I took a closer look.

Here's the explanation, as provided by the owners of the fencing, on the two notices pictured below and a third a little further down today's post. It seems to me to be a pretty half-arsed way to go about things. They're putting up sturdy fences (with gates, so access is not obstructed) and then planting trees of various indigenous species within the fences. This is all because of hefty over-grazing from livestock, sheep and deer. I cannot imagine what other animals there are that they refer to that would quite literally raze saplings to the ground. They say the intention, in the long run, will be to remove the fencing.
Yeah, that'll obviously work... You see, what they're not ever going to do is reduce the grazing of the sheep and deer as both species make money for the two estates involved.
Compare this scheme with that of Glen Feshie, where deer number have been drastically reduced without *any* fencing whatsoever and as a result the natural woodland sprouting up magnificently and wildlife coming back in abundance. Let's be honest, this scheme is a nonsense. If, and I mean if, the fences are removed and deer and sheep numbers stay largely the same, over a short period of time all the new saplings will be gnawed to the ground and what will be left will be a very nice planted woodland that is once again doomed to extinction.
Whoever designed this scheme needs their heads read.

Walking though the deserted Glenballoch farmstead I'm absolutely sure I can recall when this was inhabited. I say absolutely but it was twenty years or so ago, and it was in a sorry state then. I wonder if any of the congregation can help me here? Was that the case?

To pin the blame on climate change is surely stretching things way too far. By far and away the largest cause of the deforestation that they are trying to reverse is the overgrazing that the two estates have been happy to see for decades as it's been making them money. However, there's now the public purse to plunder in the form of grants from SEPA and 'NatureScot' (Scottish Natural Heritage's rebrand) and so it's the Scottish Taxpayer who's paying for this, not the people who actually did the damage - the Pitmain & Glenbanchor Estate and the Cluny Estate.
Just a reminder of Scottish Natural Heritage's record as the custodian of Scottish landscapes; they're the organisation who with virtually a day to go before publishing the Scottish Wild Land Map, removed a huge swathe from the Monadh Liath so the Highland's largest wind farm could be built - the Stronelairg wind farm that is now to be extended again. Custodians? Don't make me laugh. I wouldn't trust these charlatans any further than I could throw them.
After clambering up a step little section at the start of the public road you come to the bench situated to the rear of the car park. Well, you do after you have managed to squeeze yourself and your rucksack through the tiniest of gaps left by the inconsiderate couple who had parked their enormous campervan in front of the bench. They seemed enormously put out that I was now sitting on 'their' bench as they were about to tuck in to their fried breakfasts. I feasted on a second breakfast of chocolate cranberries and orange juice as I relaxed into the view back up the glen, despite the malevolent stares from the silent couple.
I recall three campervans parked up which made it difficult for an arriving car with a couple of walkers who were trying to park in the little space left. I may be wrong here but I assume the car park is for day visitors and not for overnight stays by ugly giant white campervans that you can see from miles away up the glen.
I sashayed down the road, satisfied that the campervan couple had been adequately annoyed, and bumped into another Challenger, and please forgive me, but I have the memory of frying pan*, whose name I have forgotten. We walked on together to the Newtonmore Hostel which is the current preserve of Challenge Control until it moves to the Park Hotel in Montrose in a couple of days time.

* If washed correctly, it smells of something gorgeous, but for the life of you, you can't remember what.

Google Maps tells me I spent two hours and ten minutes at Newtonmore Hostel. As an aside, I have to say that on the odd occasion I've found the timeline facility incredibly useful.
However, back to the subject - it was a lovely couple of hours with Mick & Gayle who were manning the Control phones. They're completely wonderful and plied us with cups of tea and Challenge Gossip. Challenge Gossip can work like this: Challengers bump into each other and chat, snippets of which are passed on to another Challenger a day or so later, who then takes what they remember of a snippet and pass it on themselves when meeting a different Challenger the following day. Eventually a garbled version of a thrice misremembered snippet is passed on to Control, or just occasionally to the Challenger who first spoke the snippet. It's Chinese Whispers on steroids.
As an example, quite a few years ago Phil and I arrived at the Slaters Arms in Cannich a bit fed up and grumpy after a very hot day that seemed to take a lot longer than it should have. I sat down, knackered as Phil went to the bar.
Here's your pint, Bastard. (Actually, it wasn't 'Bastard', it was far worse but quite normal between us.)
Oh. Ta, Bastard.
Then Phil spotted another Challenger he knew from a few years earlier who was on his own and so sat with him as I perused the menu and got another four pints in as the first had evaporated.
Three days later we were in Aviemore, phoning in to Control.
What's all this about you and Phil having a major fall out? Are you still walking together? Is everything OK?
******
It's a pleasant enough stroll along the cycleway to Kingussie, enlivened briefly by a couple of buzzards playing overhead. I am soon in my gorgeous room, showered and in my fluffy dressing gown and slippers, with clothes hanging on the cranked-up heated towel rail.
A Facebook Message is on my phone, from Lindsay. A few days ago we had agreed to meet up in Kingussie. She's downstairs and the proprietor won't let her in, as he's knocked on my door and had not got a response and so assumed I was asleep. I must have been in the shower at the time. Lindsay is a Challenge Stalwart, as hard as nails and very, very kind. She had agreed to walk with me for a few days as she had nabbed a lift from another Challenger from the south coast to spend some time up here during the Challenge.
I padded downstairs, in my dressing gown and slippers to rescue the damsel and took her straight up to my room. This could not have looked much worse!
I had only just opened a parcel sent from Mad'n'Bad. Inside was a Nalgene bottle full of his very own Damson Gin, which I have to say is extraordinarily good. I tried plying the girl with said liqueur but she would only have a splash in her coffee, recalling a previous episode with Andy's Sloe Gin at Northwater Bridge campsite that hadn't ended well.
You should never let a fine liqueur sit unattended, as it's a dreadful fire risk, so in order to save the other hotel guests I took one for the team and polished it off. There's lovely. The world was now an infinitely better place. 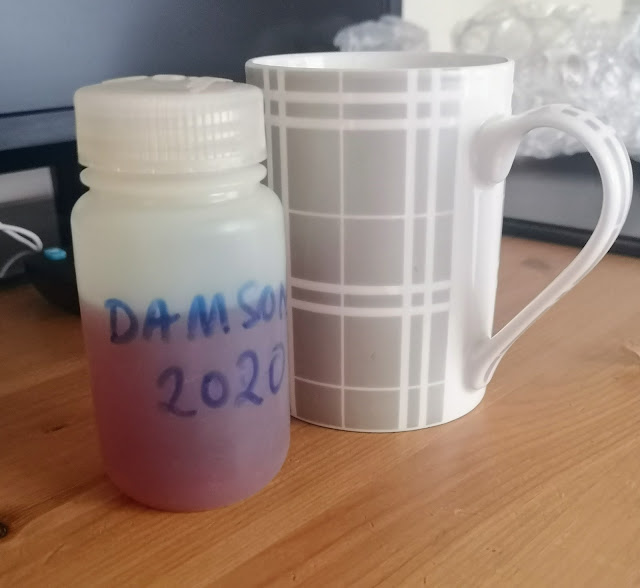 No sooner had I finished Andy's excellent libation when there was a knock at the door. It was a special delivery!
Today was getting better and better.
So I found another cup and cracked open the bottle to celebrate reaching the traditional halfway point on the TGO Challenge, the A9 trunk road. We toasted our magnificent donors, Lord and Lady Elpus, along with young Mr Walker, and my Brother Dave and Sister Megan, who by their amazing generosity had made all this possible. I was now feeling bloody good.
Sadly, Lindsay had to leave to search out her own accommodation leaving me to get ready for dinner. Now I'm rather partial to a good dinner, which is why I enjoy coming back to the Cross at Kingussie whenever I'm in the area. It's very important to be well fed on the Challenge, which I've written about in the past:
TGO Challenge: Wasting Away...
So, with no more ado I dressed in my best (and only) merino wool shirt - the collars and cuffs were still quite damp - my finest walking trousers and camp shoes (as in worn in camp, not 'camp') and headed down to the dining room. I'll let the pictures do the talking, but you cannot begin to imagine how wonderful it is. 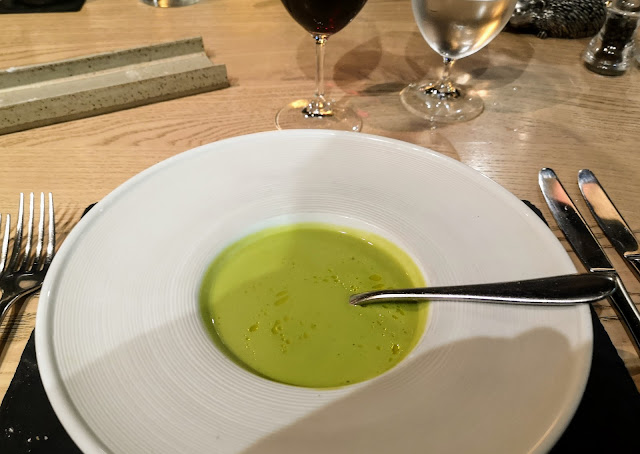 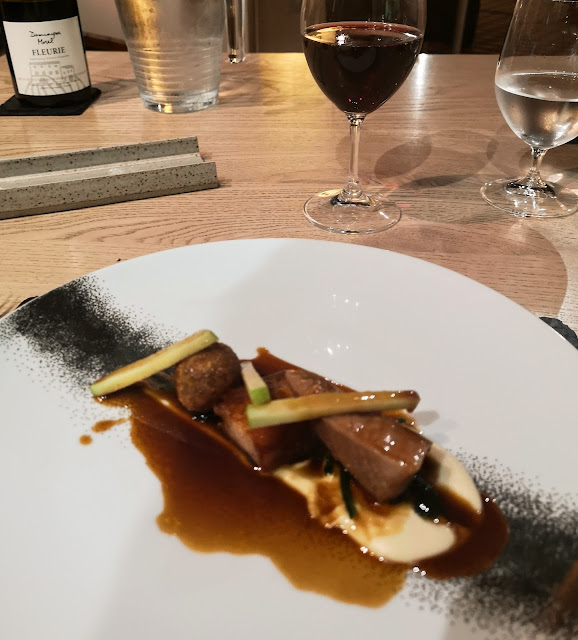 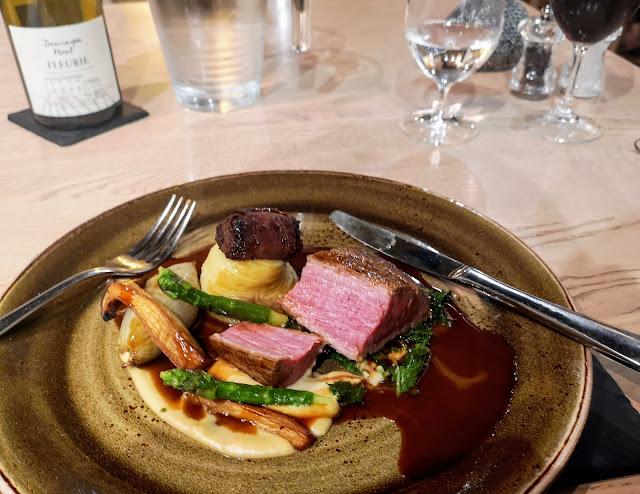 During dinner a couple of Challenge friends turned up and spent a while with me to make sure I wasn't lonely. Cheers Paul! (Southend-on-Sea Paul, who does monster days to attend Cheese & Wine parties.)

I had the cheese but somehow missed taking a snap. Was it the last glass of port? I don't recall climbing the stairs back to my room but I was a very happy bunny indeed. I woke up next morning still dressed, but amazingly without a hangover. There really is a God.