Lovers of the wild places had best look away now, for those who enjoy the less-well frequented corners of Scotland are about to lose another little gem.

Of course it was inevitable. Once the 220km long Beauly-Denny 400kv pylon run had been approved (replacing the old 132kv line) it was inevitable that very large wind farms would spring up along its length, with the lure of guaranteed returns. The consumer – that’s you and me – are paying for this madness in our electricity bills. For every kettle of water you boil, you pay well over double for the electricity if it comes from an onshore windfarm, and over three times if it comes from an offshore windfarm.

These extra costs are made up of Renewable Obligation Certificates, extra costs for the new transmission network (like the Beauly-Denny line), extra payments made to the conventional electricity generators for ramping down their production when the wind blows hard and it swamps the grid, plus a few other nice little earners like BMPs (Balancing Mechanism Payments) and LECs (Renewable Levy Exemption Certificates.)

This provides a jolly nice return for windfarm investors, and they trouser the cash relentlessly. As their bank balances pile up the stock of Britain’s wild land is eroded at an astonishing rate. The already rich Scottish landowners also trouser suitcase-fulls of twenty pound notes every day in rentals. Even the local communities get a bribe to ‘host’ the local windfarms, though in the overall scheme of things they are getting the crumbs from the table.

So what and where is Cnoc an Eas wind farm? It’s seventeen wind turbines set high up on the lip of Eskdale Moor, with stunning views. Each turbine is 126.5m tall; that’s 415 English feet. That’s Very Big. 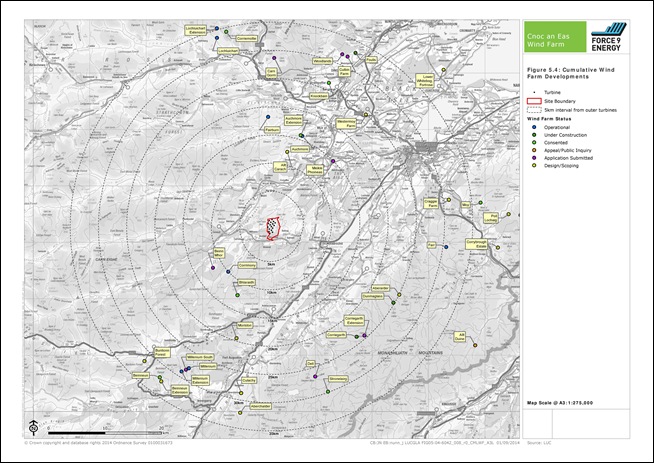 Note: All those other yellow boxes are also windfarms. You’ll notice that Cnoc an Eas plugs a rather awkward gap between windfarms for any walker heading from the west coast to the east coast of Scotland.

Here it is again: 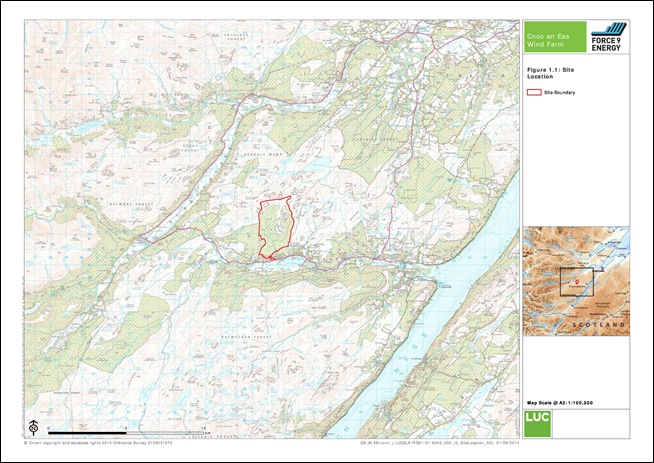 And now, let’s get up close and personal: 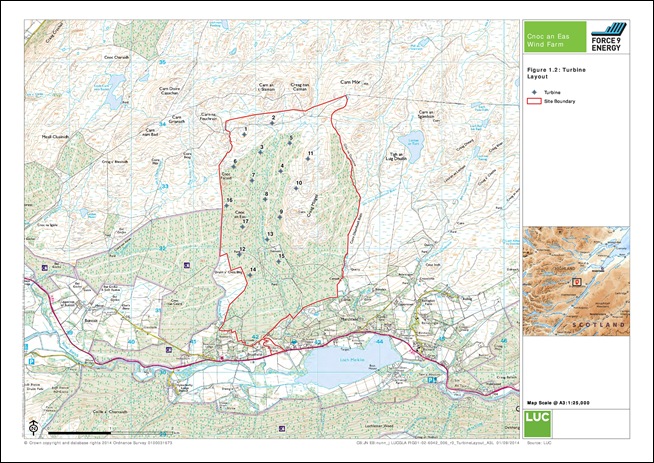 It’s ghastly, isn’t it? Any TGO Challenger heading for Drumnadrochit from either Struy (walking across the fabulous Eskdale Triangle or from Cannich to Drum will not be able to miss these beauties.  Force 9 Energy (the developer) has struck a deal to sell the wind farm on immediately after planning approval to EDF, which is a massive French energy company. As I understand it Force 9 Energy are being funded by EDF.

But from where will we be able to see this excrescence?

The developer has to provide a “Zone of Theoretical Visibility” map in his Environmental Impact Assessment Scoping Report. And so let’s enjoy another map together; you can never have too many maps, can you? 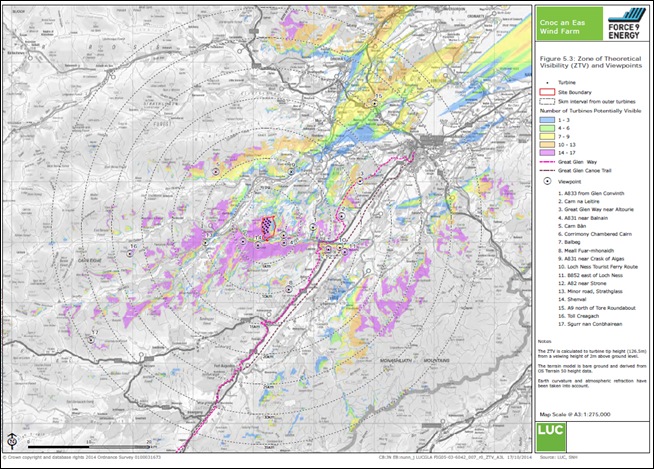 It’s not a pretty sight, is it? I want you to scroll back up to the first map in this piece, and take another look at all the other wind farms on that map. It doesn’t take the mind of a genius to realise that this part of Scotland is going to be totally and utterly trashed. Ruined beyond belief.

But (and this is the funny bit – if you enjoy a little gallows humour) it doesn’t end there. As we have learned a few months back from the Stronelairg wind farm, these power stations need connecting up to the new Beauly-Denny transmission line. Let’s take a look at the Beauly-Denny map of this area. Here you go: 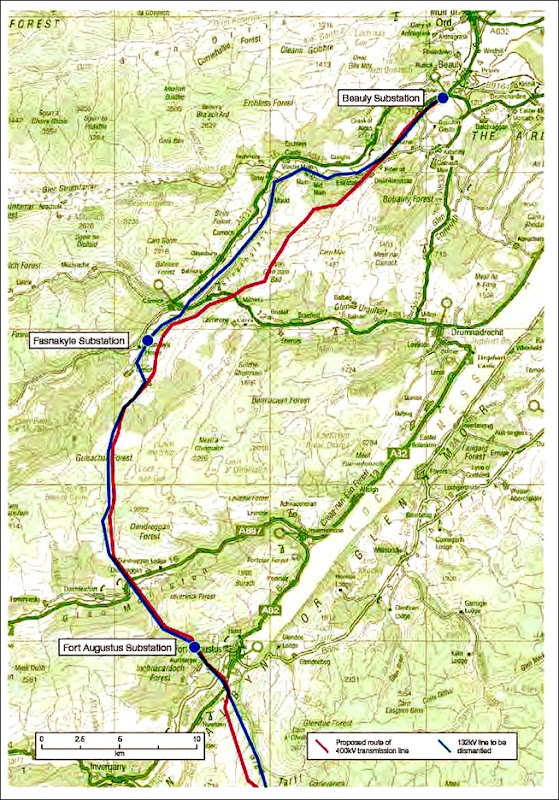 I had a chat with those awfully nice people at Force 9 and they told me they were going to connect to the Beauly-Denny line at the Fasnakyle substation. So this means that there will be a seven or eight mile pylon run from the windfarm to the substation. Why not, eh? In for a penny in for a pound! If we are going to fuck up this heavenly little part of Scotland, let’s make a proper job of it.

So, my old beauties: What do we all think about this? Over to you:

(And look – I know I said “fuck” quite vehemently and loudly, but let’s not scare the horses, eh? Ta.)

Plucked from the ether by Alan Sloman on Thursday, February 12, 2015