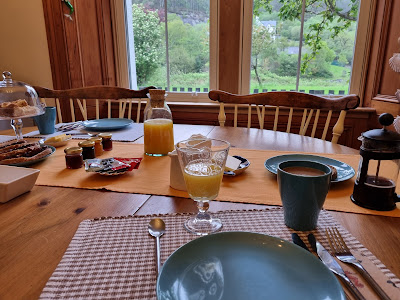 Breakfast for one. Through the windows the outside looks cold and gusty. Over the last few days the forecast has veered from one poor day followed by quite a few promising days of sunshine, to that poor day followed by a very mixed days with heavy showers and heavier winds. Fortunately, Phil has me walking a fairly sheltered first day with a fair proportion of the afternoon in forestry, so I'm away to catch the school bus to Acharacle in a fairly optimistic mood.

The school bus drops me at the Loch Shiel Hotel and I stroll into the lobby to find the signing-in sheets on a small table in the corner. It's bang on nine o'clock as I add my signature. No one's about so I hoist my pack for the first time on the walk.
It feels very heavy.
It's an easy six mile plod to the beach where I had to meet John the boatman and I'd two and a half hours to get there; some useful time to settle myself into this year's TGO Challenge. No sooner had I finished tightening my hipbelt than I ran into Graeme, Daniel and Kaye who were about to pile into the shop to resupply for the next leg of their Challenge. They'd started two days ago at Kilchoan and so had suffered pretty miserable weather. They looked cheery enough but I lacked the wherewithal to engage as my head was set on a lonely walk and idiotically I strolled on rather than wait to join them on the walk to the boat. Odd, but that's how it works at times.

The muted panoramas of a drizzly day are not where I look to find inspiration; they're simply the backdrop for the charm found immediately around as I make my way through the morning. The soft early May foliage of the native woodland is a joy and birdsong fills the moist air. With this scenery as my company the morning slips along beautifully. The slutchy first yards of the lane I take as a shortcut is just another way of getting into the walk, easing myself into what can be much worse later on. Magically, I find that I'm in a very good place and the very serious doubts I'd had in a sleepless night are melting away as I find my natural stride after a few miles of a slightly forced and awkward gait. 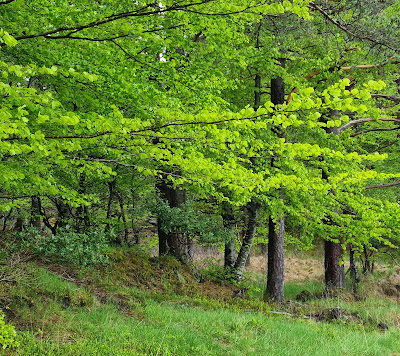 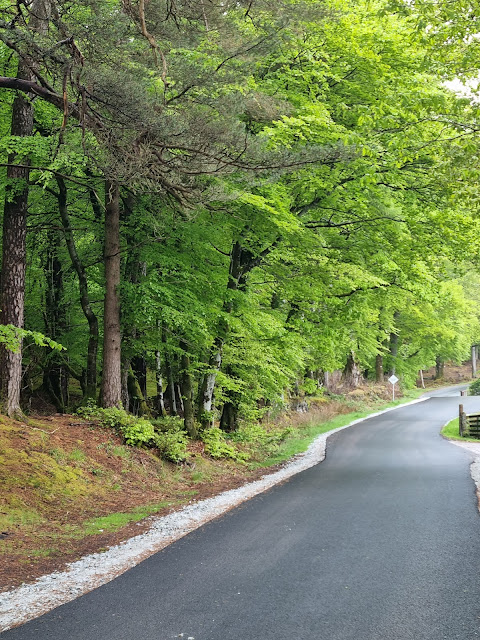 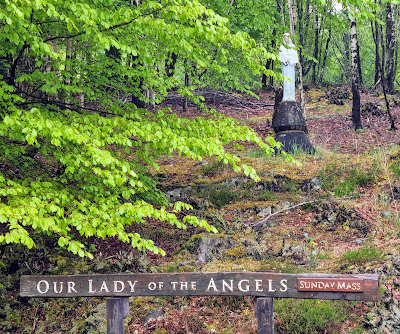 I've walked along in my little half-world, taking short breaks to adjust my pack's harness and boot laces until I'm sure everything sits and feels about right while I'm on an easy section. Everything now works together and before long boots, belt, pack and clothes are just part of me and feel perfectly natural. That's a relief as it can take me a couple of days to find this sweet spot. As the gorgeous Dalelia approaches (does Crewe stop at this train?) I realise that the three musketeers are on my heels and I have company.
At the beach we bump into Jan and Ellen from Holland who are walking from B&B to B&B every day. They must have signed out quite early from Acharacle as they've been here an hour. John, our lovely boatman, decides to take us in two groups of three, and so I join the Dutch team for the first crossing. I struggle into my lifejacket, and hop into the boat from the beach as John shoves it into the loch. Moments later we're whizzing across the waves, powered along by an absurdly powerful outboard motor. Stupidly my phone is in my coat pocket and trapped out of reach by the lifejacket so there are no pictures of our crossing. It's a great run around the islands, pausing for John to arrange a return of a couple he had landed on one of the islands earlier in the day. Then we clamber onto the floating pontoons that make up the jetty on the other side of the loch.

When you leave the jetty there's a steep little footpath that zig-zags its way up to the top of the hill to gain the track to Polloch. There's a bench at the start of the climb so you can admire the views back over Loch Shiel. It was not yet midday so I decided to get the 150ft climb out of the way and stroll down to the hamlet and make for a spot just past the bridge over the River Polloch where there's grass and a bit of shelter from some pines and have a spot of lunch there.

It was too chilly to stop for long; I forced myself to stay for around twenty minutes but only managed a block of chocolate and a breakfast bar, thinking I'd eat as I walked. By now the wind was beginning to pick up, the temperature dropping and clouds were gathering. It looked like I was to get a soaking.
It has to be said that the minor road along Loch Doilet does go up and down rather unnecessarily only for it to come back down to loch level but I was surprised that I actually bowled along without too much trouble. That might have been the sugar rush from the gorgeous rum and raisin chocolate.
I passed the Scotways (probably better known to you as the Scottish Rights of Way and Access Society) sign that indicates the start of the coffin road and miners path that I guessed Jan & Ellen would be taking to get to Scotstown for their night indoors before they headed through Glen Gour tomorrow. The next Scotsways sign pointed me in the direction I was taking - the eighteen miles or so to tomorrow's destination, Ardgour.

Occasionally there are wooden guide posts, usually at forestry track junctions that give a helping hand, but after leaving the road I'm on well constructed fairly smooth tracks that make walking an easy affair giving time to take in the scenery, such that it is in a planted forest. Light rain showers sweep over me with the consequent drop in temperature so the anorak is brought out to remain for the rest of the day.

Now and then the track reverts to a metalled road which had me wondering the reasoning for it. There's absolutely nothing up Glen Hurich apart from trees, and fantastic scenery. Perhaps in earlier times the lead mining that was prevalent in Strontian also took place here as well. There's no mention of it on either the 1:50 or 1:25k OS maps.


My route takes me over the bridge across the River Hurich to the south side of the glen. Phil & I decided not to visit Resourie as it could have left an awkward crossing of the river if it was in spate, and the southern track takes you a couple of klicks further up the glen and more importantly past the potentially awkward gorge at Mam Beathaig, where a huge rocky spur juts from the northern wall of the glen forcing the river through a narrow gap, that has an amazingly wild feel. You seem to enter another world having passed through this gap.
It was whilst having a break at this grassy spot that a Forestry Scotland Fiesta stopped for a chat. The driver, a guy slightly older than me was interested where I would be stopping. I showed him my map and he suggested that if I camp very slightly further on he would be grateful. Apparently there's a new pair of birds that have set up home and he suggested it would be better if I was out of eyeshot of their new home. 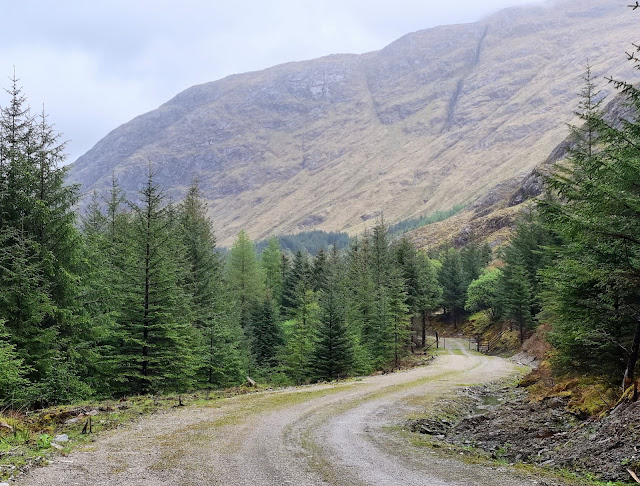 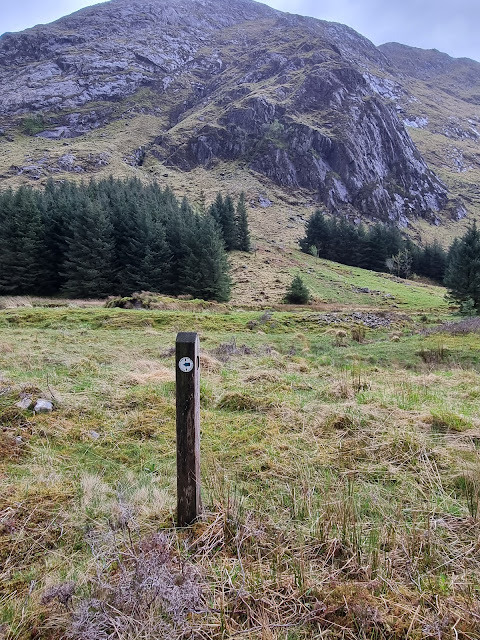 After the ford the going is back to Highland Glen, with quite a few interesting burns pushing their way to the main river and so there are a few guide posts to help you find your way. These are the last you'll see. I would imagine after heavy rain these side streams could be problematic, as they are difficult to get out of in places - a bit of a muddy scramble. 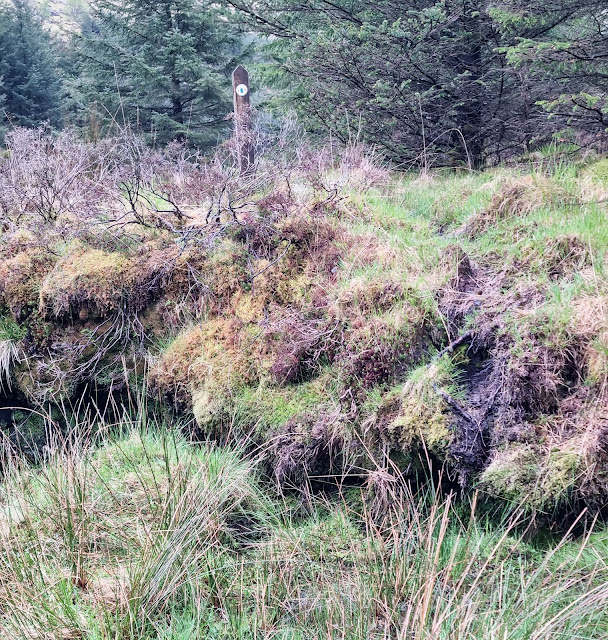 I set up home as suggested by the man from the Forestry, on a raised platform above the river, not wanting any unpleasant surprises should it piss down in the night. I was certainly ready to stop but very pleased that I had actually managed the day. Water wasn't a problem as there was an abundance of the stuff everywhere you looked. Punch a hole in the ground and I think there would be a geyser twenty feet high. 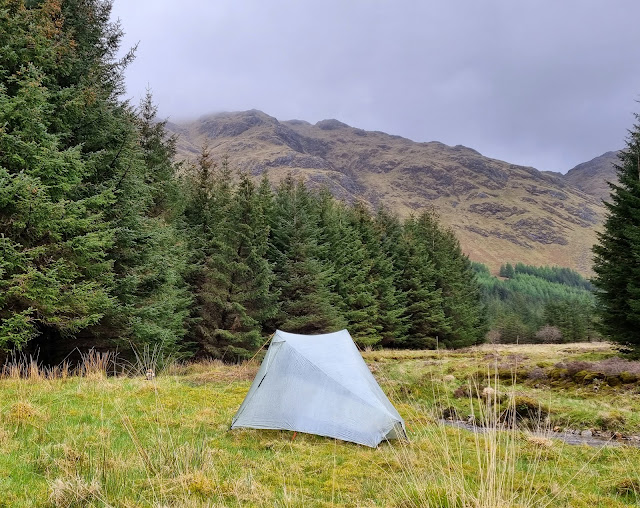 After lying down on my scrumptiously beautiful sleeping bag and wonderfully warm squidgy mattress I found it difficult to find the enthusiasm to eat. The Ovaltine was good, but I only managed half my Real Turmat Beef Stew, which is one of my favourites. I buried the rest. This was odd as I hadn't had much to eat during the day. Or, come to think of it, anywhere near enough to drink. This was a problem in shitty weather, and it would bite me in the arse later on. However, a few warming mouthfuls of Waitrose No.1 Tawny Port (try it; it's gorgeous) settled me down for the night and I was away with Ms Hepburn for a solid nine hours.