It’s not often that you can say this but today has been a Very Good Day in the fight against wind power stations on wild land.

In fact, It has been an excellent day. You may remember my views on this particular wind power station, which you can find HERE, when I wrote about it in April of last year.

This morning, the Highland Councillors undertook a site visit to the Ptarmigan Restaurant at the top of the Cairngorm Funicular railway, over 20km from the actual site of the proposed windfarm, to see how visible Allt Duine will actually be.  Then, this afternoon, they rejected RWE’s application for 31 x 125m high wind turbines on the very boundary of the Cairngorm National Park by nine votes to three. It will now go to a public inquiry to be undertaken by the Scottish Government. 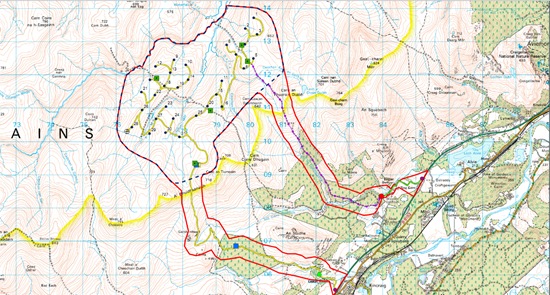 The John Muir Trust, The Mountaineering Council of Scotland and the Cairngorm National Park Authority all made written submissions lodging their objections to the Application. In addition, there has been a well organised campaign called Save the Monadhliath Mountains backed by a petition with over 1300 signatures. They had the support of Cameron McNeish and Chris Townsend, who have both been active supporters of the campaign; indeed, Chris was a spokesperson for it.

Highland Councillors Fallows, Black, Kerr, Balfour, Davidson and Wood all spoke up against the planning application. (Hooray!) On the other hand, Councillors Pragg, Hunter and Gray supported the application. (Booo!)

Councillor Pragg thought the windfarm was “well planned” and he thought “the influence on the Cairngorm National Park was not significant”.

Councillor Hunter said that “many of the individual objectors live a long way from the site”.

Whilst I am on the subject of Councillor Gray it would be prudent to mention that in his Register of Interests on the Highland Council Website, that Jimmy Gray declared:

14/01/08: Platform PR - Celebration dinner for 5th Anniversary of funding of company based in the Highlands

Platform PR do a huge amount of work for the wind industry: Amongst others, their clients include:

I wonder just how objective his viewpoint actually is. It certainly didn’t seem to coincide with that of the majority of his colleagues. Councillor Wood certainly seemed to disagree strongly with him. None of the other councillors have registered dinners with Platform PR.

With it now in the lap of the Scottish Government, there is still a big fight to come as they have a history of overturning local democracy: Think of Trump’s golf course and the many, many wind farms, it has approved at inquiry.

However, this fight has been very high profile and the session was screened live so that the public could see the debate. The BBC and other media businesses were all there. It would be a foolish Scottish Government to overturn this popular decision.

Anyway: Today is a day to celebrate! Tomorrow we should renew our efforts to ensure the public inquiry also dumps the application.

Plucked from the ether by Alan Sloman on Tuesday, January 17, 2012