In any discussion about wind power and wild land there is always the initial preamble about what constitutes ‘wild’ land. The argument goes, quite rightly, that ALL land in Scotland has, to some extent, been been influenced by the hand of man.

In order to protect land from wind power station development it is important to be able to show that the landscape has wild qualities that would be lost by the imposition of wind turbines, substations, access roads and pylons.

Until now,Scottish Natural Heritage (SNH) had prepared a map of ‘Search Areas for Wild Land', which identified where the most significant and valued areas of wild land are most likely to be found.  The map was a preliminary one, prepared in 2002 for debate and further refinement, and did not include small areas of wild land, or attempt to precisely define the boundary of an area.

SNH has now undertaken new mapping work to refine our understanding of wild land.  Phase I of the work, which maps relative levels of wildness for the whole of Scotland, is shown below: 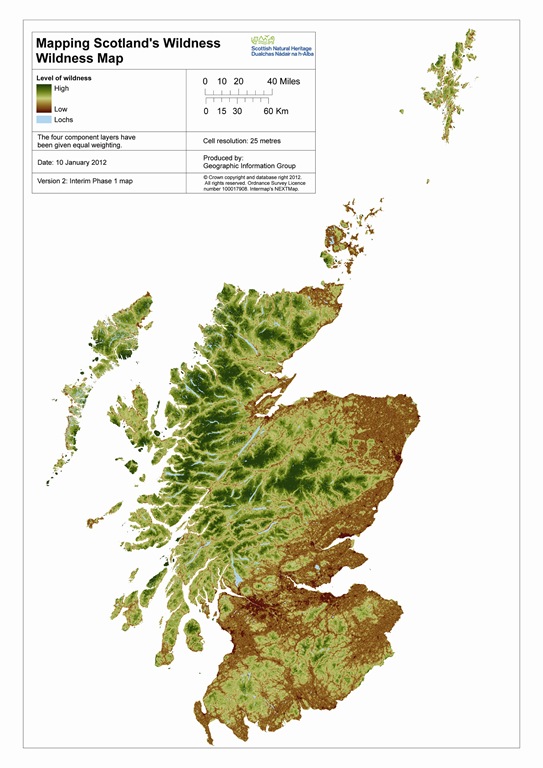 The map shown above is the composite of four maps that compare the ‘remoteness’, ‘ruggedness’, ‘perceived naturalness’ and ‘absence of modern artefacts.’

You can go to SNH’s Website to view all the individual maps and the resultant “relative wildness” map shown above in huge detail.

SNH will consider comments on the Phase I mapping and methodology in developing Phase II.  Phase II will examine options for identifying wild land areas, which are considered of particular importance from a national perspective because of their quality and extent.  It is hoped to present the results of this work in Spring 2012.

This is hugely important in the planning process for wind power stations as we will then have a definitive map showing land that is considered sacrosanct.

Plucked from the ether by Alan Sloman on Thursday, February 02, 2012