As I slipped off to sleep utterly knackered last night, it crossed my mind that perhaps I’m not quite ready for the Challenge. My thighs were on fire and I was completely, not to put too fine a point on it, fucked.

How on earth had I let myself get into this state? I blame Phil. And Andy. And WeeWillyWilky.

I had just returned from the annual PreWalkDaunder which is the brief leg stretch in the Lake District used as a shake-down for gear and to gauge general levels of hill-fitness prior to setting off to walk across Scotland on the TGO Challenge. The three of them had shot off up Stakes Pass like the Spring lambs, while I brought up the rear like a knackered old tup after a day serving his flock. It was an incredible struggle.

This is not a good thing. Not a good thing at all, in fact. Something needs to be done in the next two weeks to stop my heart bursting out of my chest and my legs turning to jelly.

But back to the Daunder: Mostly in pictures: (All the pictures will get bigger if you click on them)

I wonder if the night spent in the Old Dungeon Ghyll bar wasn’t quite the best preparation to launching ourselves at the tops? Still, a jolly fine night was spent therein, talking the usual complete bollocks and sampling the Black Sheep Ale, Black Sheep Bitter and Black Cat. All quite delicious. There may have been food as well. 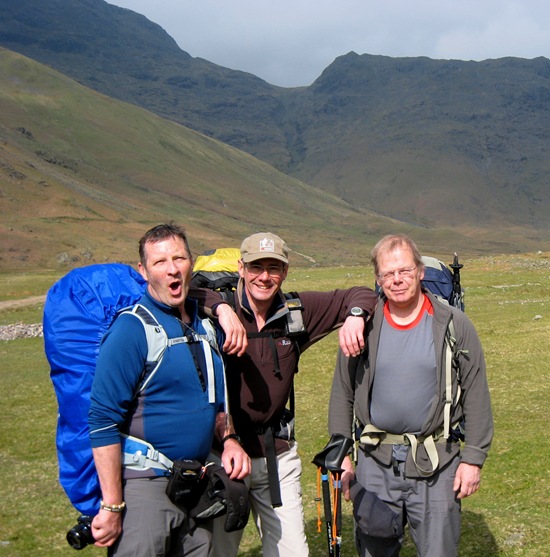 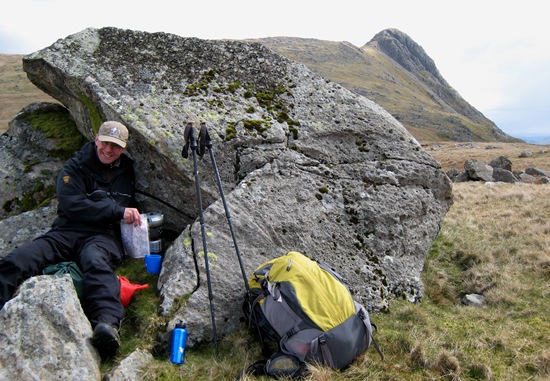 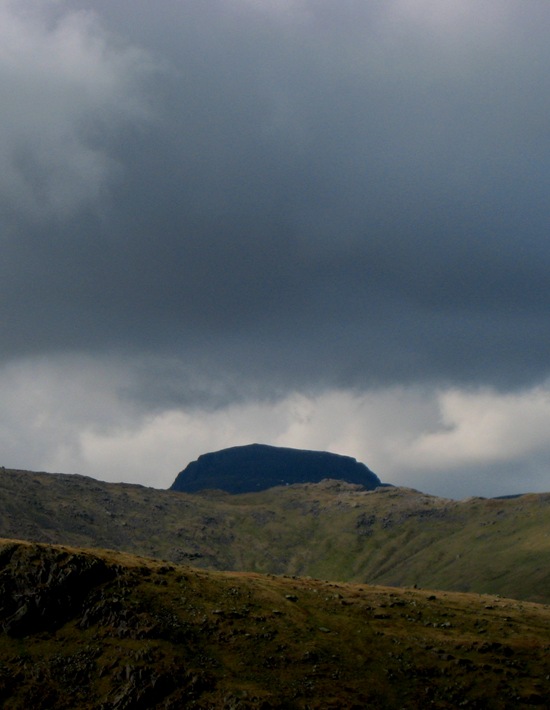 Every now and then the weather threatened, but it was just toying with us. Amazingly we stayed mostly dry. The forecast had been for heavy showers developing into persistent rain. 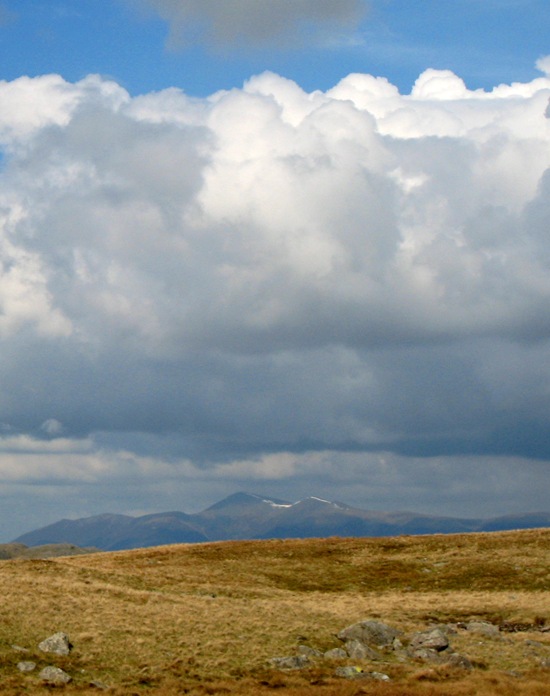 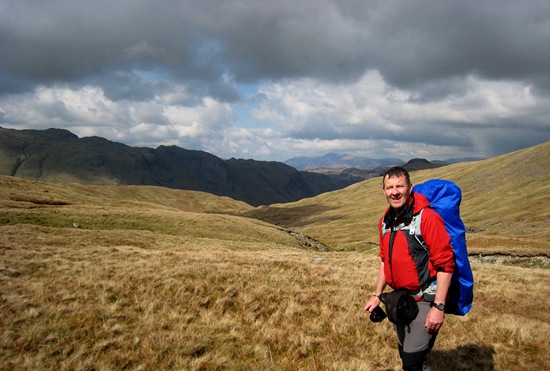 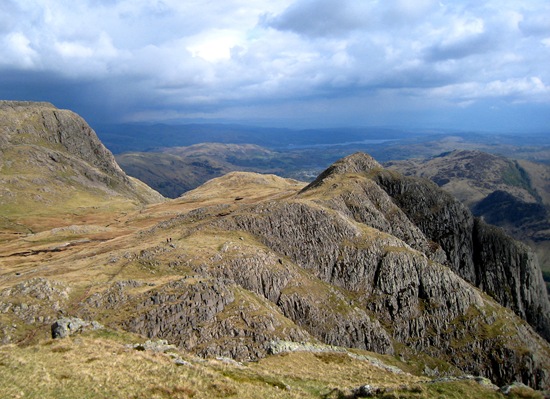 VIEW FROM PIKE OF STICKLE 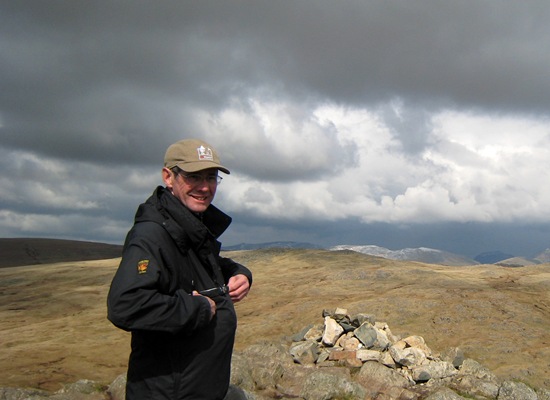 For a chap with a rotten head for heights, I just thought I would let you know that it was a Very Brave Thing, “wot I did” to clamber up on top of Pike of Stickle to take these pictures. I hope you appreciate them. It’s not the going up bit that’s tricky; it’s the going down. The next picture is looking back at it from the safety of Harrison Combe. 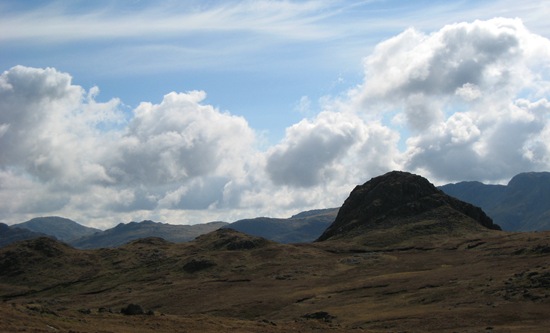 Then, a gentle climb up Thunacar Knott and around to Sergeant Man. 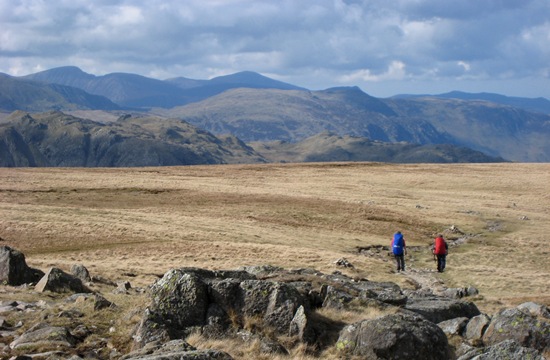 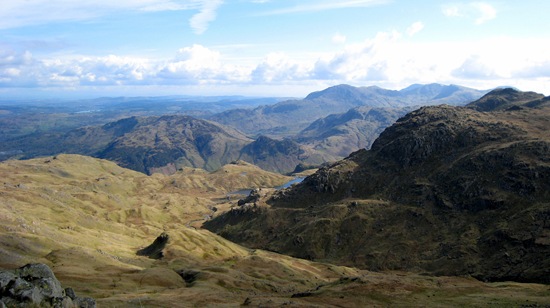 It was perishingly cold on top of Sergeant Man, so we decided to have a second lunch. Phil used the rare chance of mobile reception to ring Miss Whiplash, who was at home, suffering from a bad back, brought about, I am sure, by some debauched torture routine, that should probably best stay unreported. Live and let live…

Rather than follow some horridly eroded footpath, we picked a jolly fine route off-piste down to our overnight spot at Codale Tarn. The fell side was doing it’s best to simulate true Highland landforms and gave us a nice craggy descent with running bog on 45 degree slopes. Andy & Wilky did their best to win points for the longest skid and forward roll. Neither got many points for their landings, which were usually upon their very bruised bottoms.

Up above us we saw a lone camper up high on a ledge sporting the latest in shelters: an MLD Trailstar. He had picked a glorious spot but he lost marks for the colour choice of his shelter: a drab grey. Andy’s Trailstar, on the other hand, was a luminous gold that certainly was very popular with the flies,

I spotted a rather nice tree on the way down to the tarn beautifully lit by the afternoon sunlight: 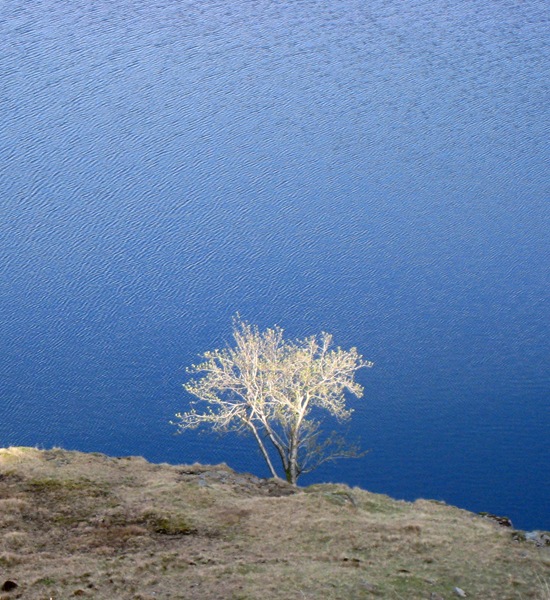 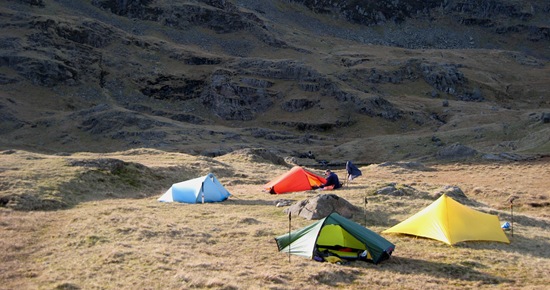 Dave was suffering from very cold tootsies and so spent some time in his sleeping bag warming them up, while Phil made him a nice cup of hot chocolate. Phil also did a reasonable impression of Gunga Din, fetching gallons of water for everyone. He’s a top bloke.

The flasks were passed around but by 8:30 we were all tucked up in bed, with Wilky snoring for Britain. The thighs were still okay at this point. It must have been the recuperative power of whisky, sloe gin and ginger wine.

Email ThisBlogThis!Share to TwitterShare to FacebookShare to Pinterest
Labels: PRE.WALK.DAUNDERS