It’s the little things in life that fascinate.

For example, a small child picks up his tommee tippee mug full of warm milk and shoves it in the general area of his face, and his teeth remain intact! I believe that muscle memory plays a part in this; The more they perform this act the easier it becomes. The muscles link with the brain and learn the incredibly complicated route and actions required to guide the cup to the mouth from the highchair table to the destination. And the child does not drown in milk. It is a bloody miracle – I mean – have you ever tried to spoon baby-food into a baby’s mouth? Whenever my wife put me in charge of this act with our two boys, within five minutes the kitchen resembled the Somme,

What has tommee tippee to do with the Freaky Dean & the Dulnain trip? Well, it’s been almost a year since I had been backpacking and so all the simple things that just come automatically when backpacking had to be re-learned on this trip.

Exhibit A: In the bothy on the first night, I realised with absolute horror that I had brought nowhere near enough whisky. This was very distressing. In a nice warm bothy, whisky makes the evening run along perfectly. Fortunately, Mr Walker had bought generous supplies. I am indebted to the gentleman.

Exhibit B: The body can function perfectly well without little pleasures, but the inclusion of jelly babies, cuppa-soups and hot chocolate make life go with a swing. And of course, more whisky.

It had absolutely pissed down with rain in the night and it was still pretty horrid in the morning, and to add to the misery, I left a warm bothy with a weedy lightweight spade without a handle, when the required implement was a sharpened heavyweight Spear & Jackson job. Such is the fun of living in the outdoors.

The route up and over to the second lunchtime hut was abandoned (well, if truth be told, I unilaterally abandoned it on behalf of the team – I’m all heart – but there was not a murmur of dissent in the ranks) in favour of a fine daunder down the Dulnain. The Upper Dulnain is a wondrous beast. And speaking of beasts, now would be a good time to remind everyone that it was in these confines (Humphrey reliably informs me) that the last wolf in Scotland was killed. This is all trackless stuff, but as with all trackless stuff in the Highlands, there are plenty of deer tracks to help unlock the puzzle of finding a good route though boggy bits. It felt wonderful to be out again in the cold wet air with just the elemental sounds of water and wind as your backing track.

I’m always entranced by the constant shifting of the rivers in these parts. They’re like wayward women bed partners; hogging the entire valley floor, rushing from one side to the other, forcing you up on top or trying your luck teetering over her boulders alongside the maelstrom.

This next chap had had a bad winter. The birds and foxes might have pulled though with his help.

We had a seated lunch in what remains of Dulnain Bothy No 2. See if you can spot the clue to its name from the picture. Prizes for the correct answer will be dished out by Mr Walker. 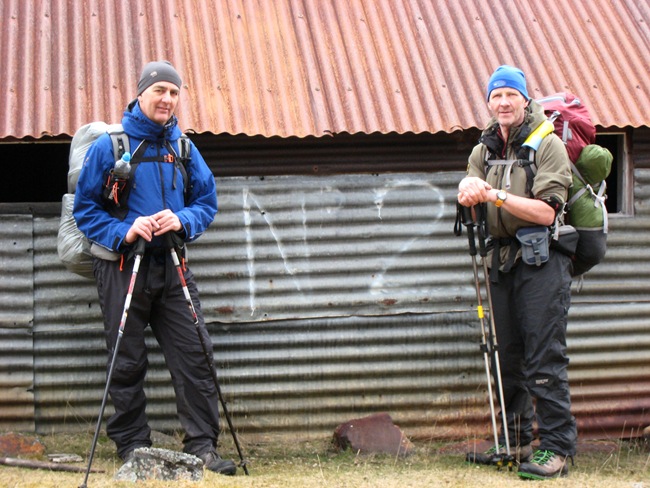 Quite why Robin & Andy decided to dress as Smurfs today escapes me.

Inevitably, having started at Bothy No 1 in the morning and lunching in No 2, we came across Bothy No.3 a little later on, where we decided enough was enough and it was time to put the shelters up and be proper backpackers, and not bothy bums. 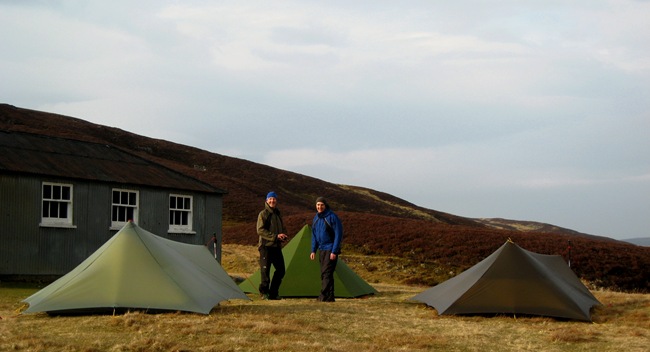 Shelter Nerds may want to enlarge the above picture, to examine if we pitched the things correctly. From left to right we have Robin’s grey silnylon Trailstar with a solid Oookstar inner. Andy & Robin are standing next to Andy’s new baby from Bob Cartwright – a silnylon HexPeak & mostly mesh inner, and on the right is Trinnie Trailstar in olive brown, with a 50/50 Oookstar inner. They went up with very little trouble at all. They were first outings in the field for each of us.

Oh, alright then; Here’s another shot of the shelters, looking down the Dulnain: 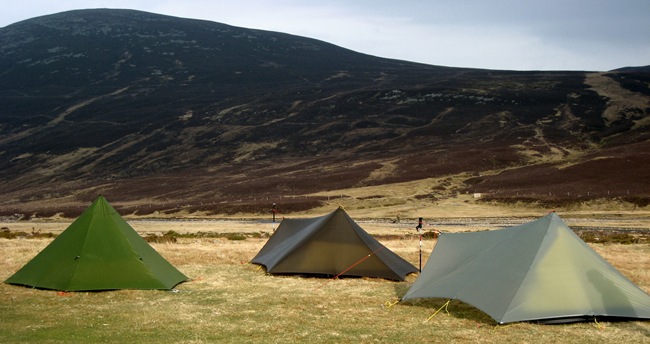 Any day now, the Reporter will be publishing her decision on whether or not a disgustingly huge wind farm will be built, bang opposite this wonderful bothy – the Allt Duine wind farm. There is one reason, and one reason only, why this wind farm is being proposed: Money. The three Estates who own the land will benefit to the tune of many millions of Scottish or English Pounds each, each year for a bare minimum of twenty five years. The company that owns the wind farm will pocket over a hundred million in subsidies over the life of the thing, paid for by you and me (who can least afford it) from the “green” levies on our electricity bills. How anyone with even half a brain cell can call this ‘green energy’ when it is totally fucking up this beautiful landscape is beyond me. They are the lunatic eco-warriors, the Eco-Nazis, who have forgotten all about ecology and environmentalism in their quest to ruin capitalism at any cost.

And this next picture shows what is to be lost. This is looking straight up Allt Duine, up to the high ridgeline that borders Strath Spey and the Cairngorm National Park: 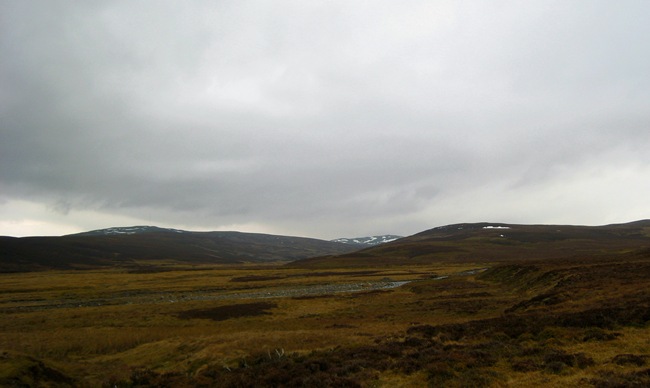 The Monadh Liath are a wonderfully remote, lonely place; A place to escape from the humdrum, a place to have space and time to think – commodities that are given very little value in modern life. It is a disgrace that the Scottish Government is even thinking about industrialising fabulous places like this.

Of course, not all hill walkers agree with this point of view, as seen in the bothy book, by a Challenger, no less: David Smithers. 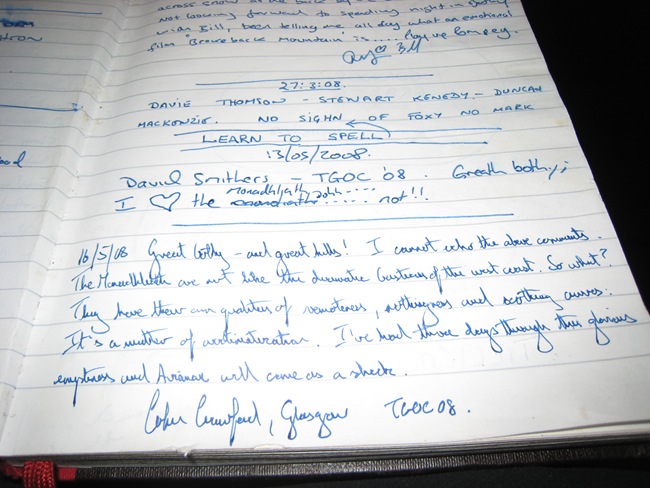 DAVID SMITHERS' ENTRY IN THE BOTHY BOOK – CLICK TO ENLARGE

Happily, the very next entry from the excellent Colin Crawford put the man straight.

After flipping up the shelters it was getting cold again, so Robin disappeared into his as yet un-named Trailstar to prepare dinner whilst Andy & I got a roaring warming fire going in the bothy and cooked in the warm, with a few snifters to help things along. 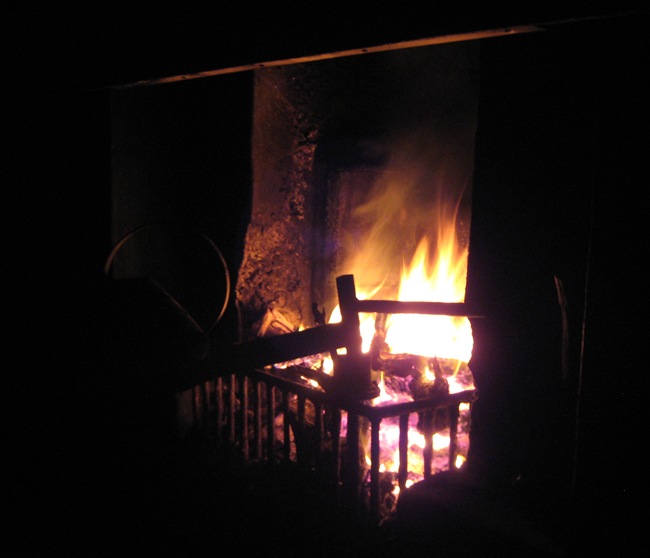 Not many miles, but a glorious trundle down the Upper Dulnain. All was well in my world.

Plucked from the ether by Alan Sloman on Thursday, April 10, 2014