Snow White and the Seven Dwaunderers

The annual PreWalkDaunder (PWD) has been held for over twenty years. In that time the average age of the Daunderers has risen inexorably. On last week’s Daunder we came across some wonderful signposts; the one snapped below the captures Phil’s and my enfeebled state of mind rather well. 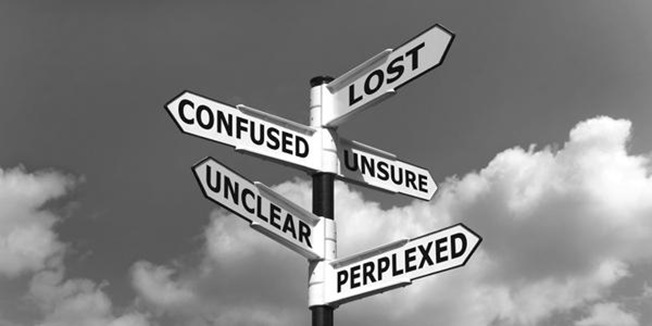 A southerly PWD was chosen for this year’s venue ~ the Chiltern Hills ~ home to Brakspears; a fine brewery, sadly gobbled up by an international brewing conglomerate. However, the beer is still excellent and so the Chilterns are still worth a trip. These hills are absolutely packed full of red kites; one random blast of a shotgun skywards is sure to bag you a brace to bolster provisions. Unfortunately not a single Daunderer had the presence of mind to bring one along.

If you click on any of the pictures below they will open up much larger in another window. They won’t be the pictures you expected but I think you will agree that ‘Tracy from Bolton’ is a far better sight than grubby, sweaty hikers.

Young Morpeth wasn’t feeling too chipper and sadly had to withdraw prior to the event. We were lucky in that Margaret stepped into the breach to add a steadying influence. And here they all are, in their cleanest, freshest kit, prior to setting off. The foreground is composed of unexploded WWII German Bombs. If one of these blighters were to go off, we would be spared three days of pointless walking around in circles. My headache from the pub in Wallingford the previous night was not helped by staring into the blinding sunlight.

I suffer for my art. 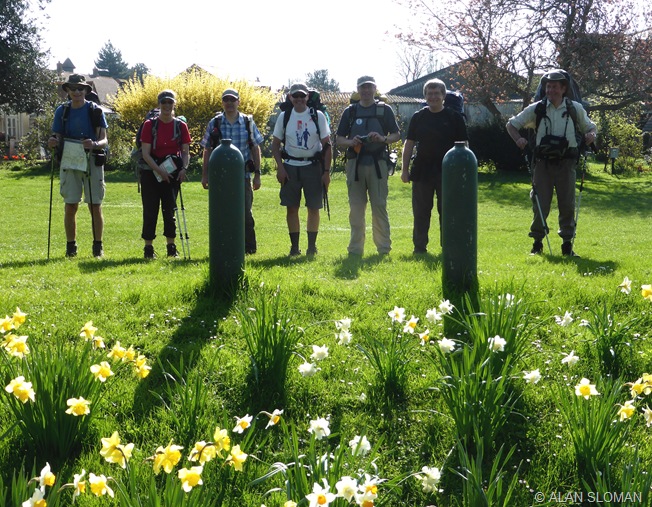 SNOW WHITE AND THE SIX DWAUNDERERS

And below you will see some immaculately presented examples of the TGO Challenge’s finest shelters.

We walked uphill. In fact, we walked quite a bit of uphill and there were mutterings of dissent in the ranks. This is all quite normal for a PWD and is assiduously ignored by the creator of the route. He’s old and couldn’t give a fig for those in his care. Sod the lot of them!

There wasn’t a cloud in the sky and so eight old and infirm Daunderers slip-slap-slopped themselves with gallons of midge repellent. After all, this was practice for Scotland. 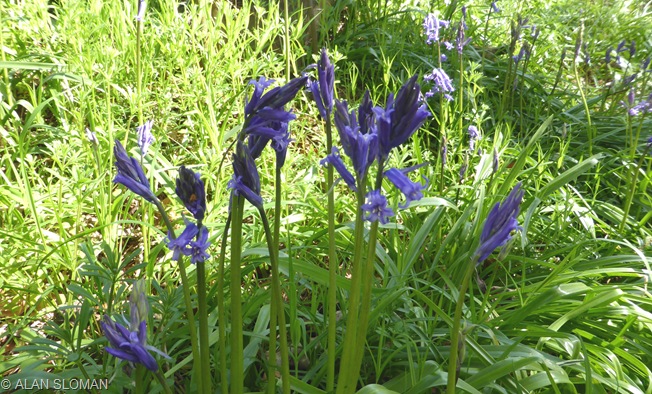 You will notice two purposeful Daunderers in the picture below. It is all an act; these two charlatans spent the rest of the walk lying on their backs, sobbing uncontrollably. 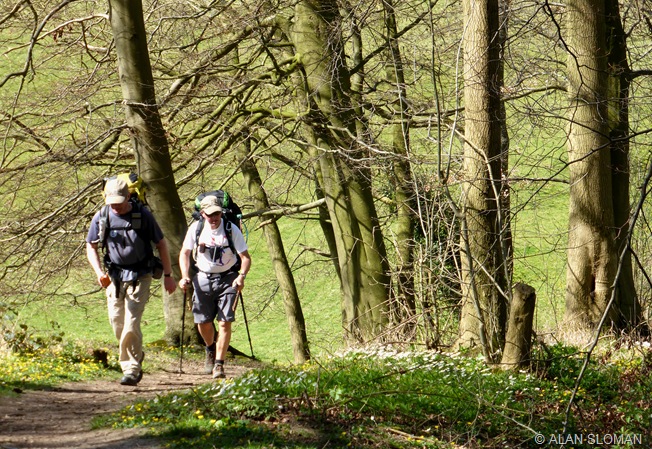 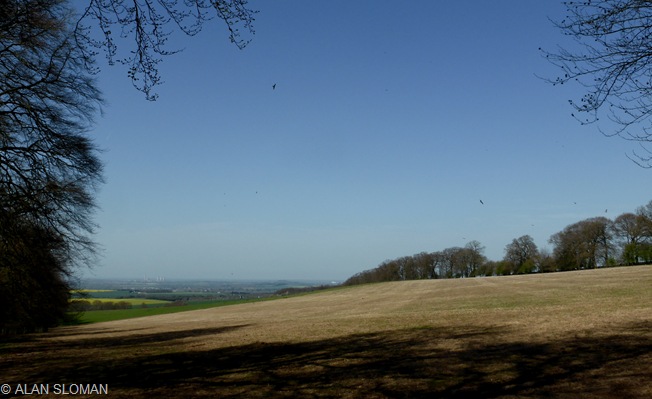 DIDCOT POWER STATION, WITH A BIT OF SCENERY IN THE FOREGROUND. SEE IF YOU CAN SPOT THE TEN RED KITES. 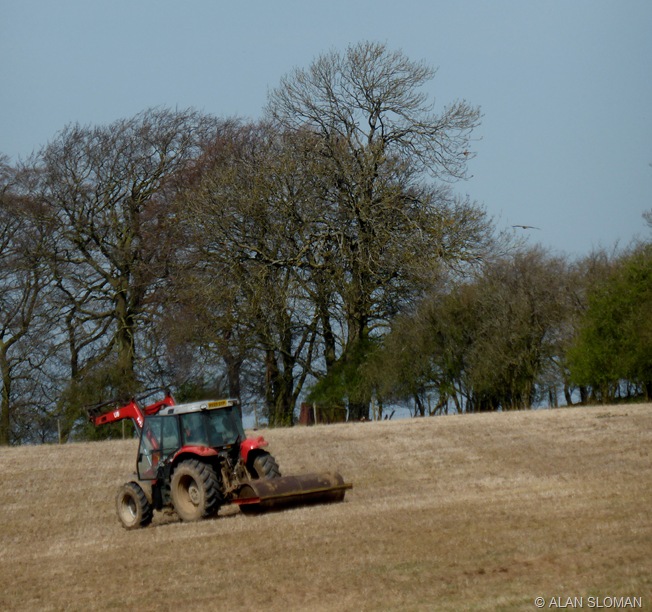 A PICTURE FOR ALAN RAYNER – A TRACTOR ENTHUSIAST.

Quite why this chap is ironing his fields with a roller escapes me; it’s far too hilly for cricket. 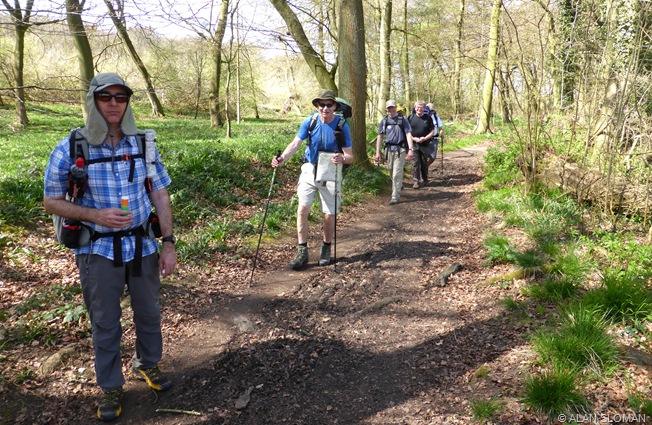 The picture above worries me a great deal. We resemble a bunch of Ramblers. And as any fool knows, Ramblers are a bunch of old fogies who walk in gangs in crocodile formation. I think this was the ‘B’ Walk. 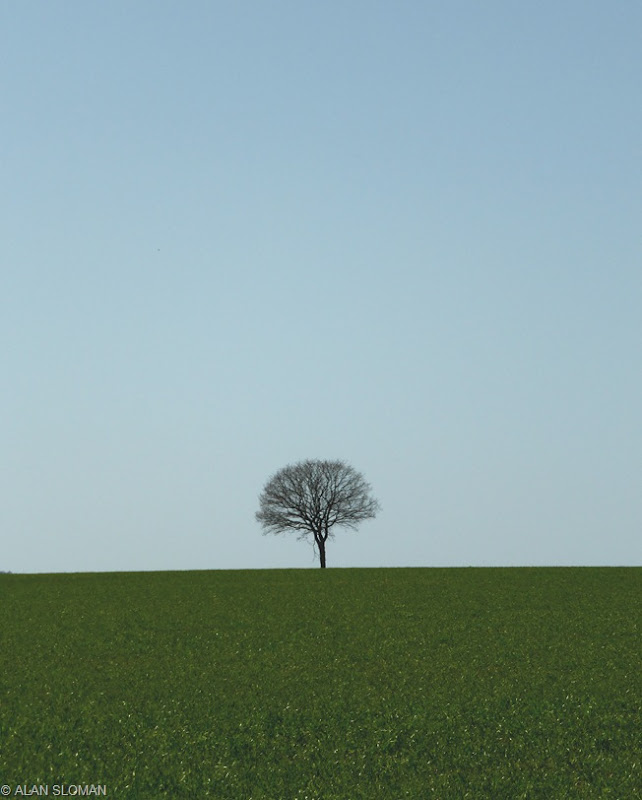 There will be lots of pictures of this tree in the Daunderers’ photo albums, as everyone took a picture of it. Because of these thoughtless acts, that tree could well develop a complex, that in time could lead to phone calls to the Samaritans. It won’t get much help there if Lord Elpus has his way… But more on that later. 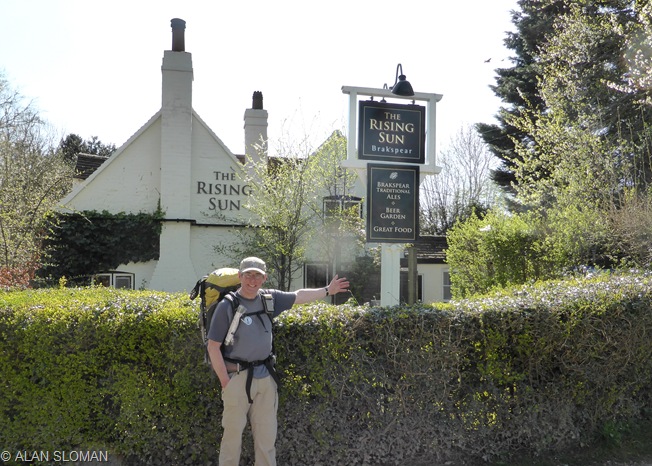 Miraculously and with astonishing good fortune, the Rising Sun at Witheridge Hill materialised before our very eyes, just in time for a rather tasty luncheon and a few pints of Brakspears. 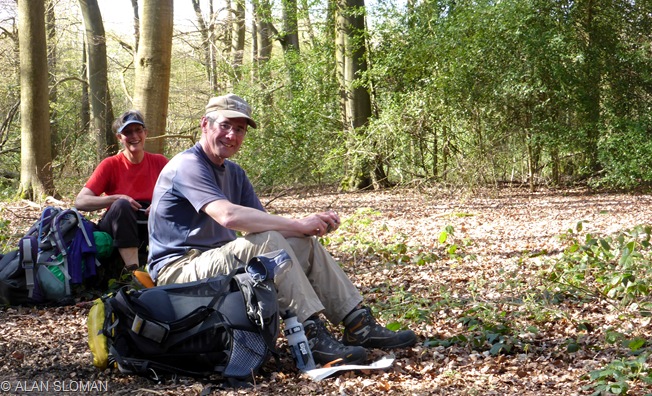 THE SATISFIED SMILE OF A MAN WHO HAS JUST FARTED & THINKS NO ONE HAS NOTICED. MARGARET BEGS TO DISAGREE.

We strolled down the hill through the wonderfully plush outskirts of Henley. Northerners in the group nodded knowingly to each other; all these posh houses were owned by rich Bastard Bankers! Boo! Hiss!

After a tortured slog of some 13 miles or so in the burning heat of the Oxfordshire sunshine, an evening was spent in the Three Tuns in Henley Marketplace, drinking Brakspears, bedded down with Fish and Chips. 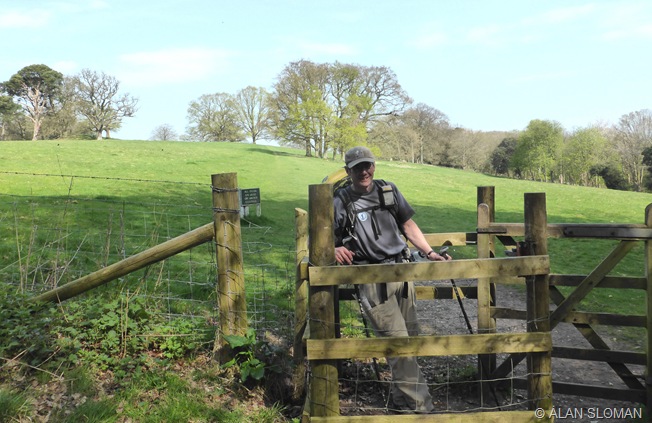 Lord Elpus, slumped casually against a stile, (his legs had gone, after a stiff climb uphill) alone with his thoughts, musing on the previous nights shenanigans with Tracy from Bolton. 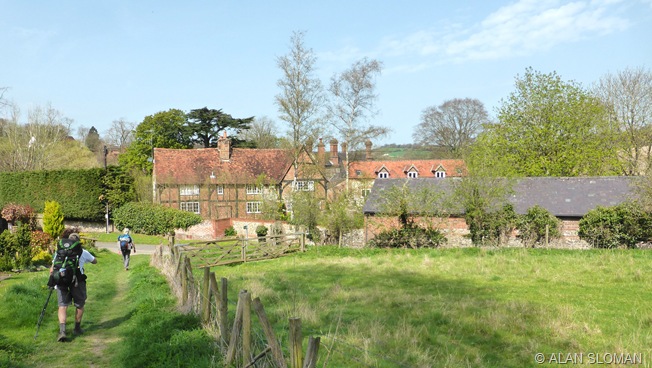 In the picture above you will recognise two alcoholic Daunderers who had spotted a pub sign on their maps at the bottom of the footpath. The Landlord told them to sod off as it was another half an hour to opening time. 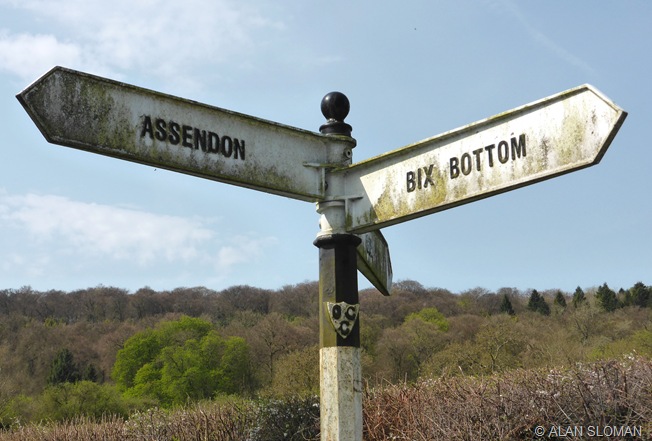 A particularly sexist signpost. Someone should write to the Guardian about this and get these places assigned new names. Just after this spot, bang on time, our morning coffee-break was entertained by an aerobatic display provided by a biplane as we lay in the cool environs of an ancient church that is being restored. 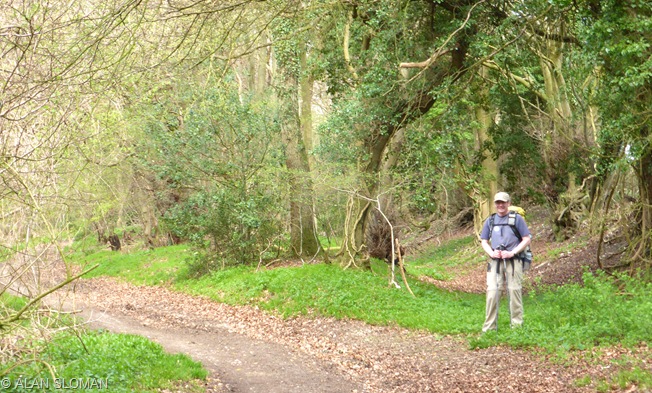 LORD ELPUS, LOOKING PLEASED WITH HIMSELF AS HE BELIEVES NO ONE HAS NOTICED HIS HORRENDOUSLY LOUD FART. 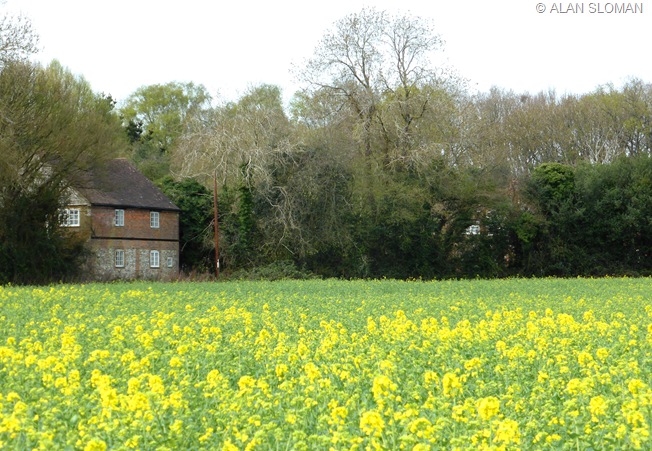 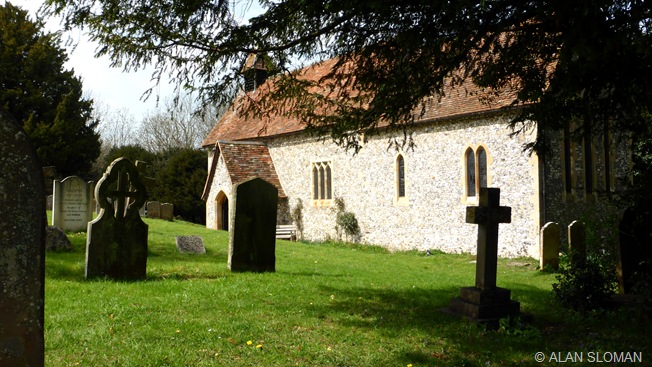 It was noted that there were quite a lot of Very Rich People buried in the graveyard of this extremely attractive church. Even in death, eh? And then, quite by accident, the Crown Inn at Pishill arrived, just in time for a tasty soup and pint or so of Brakspears. 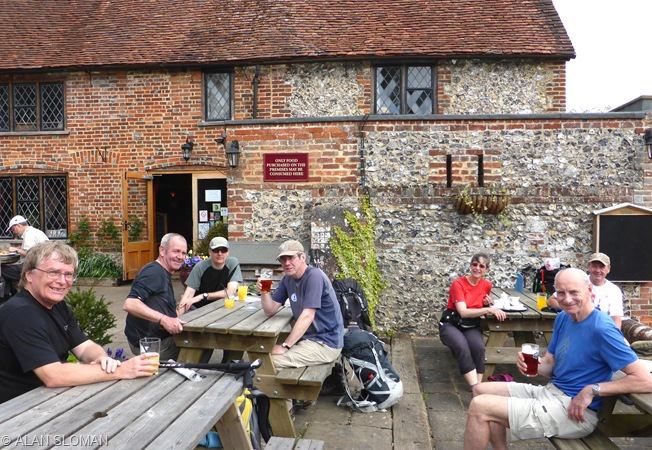 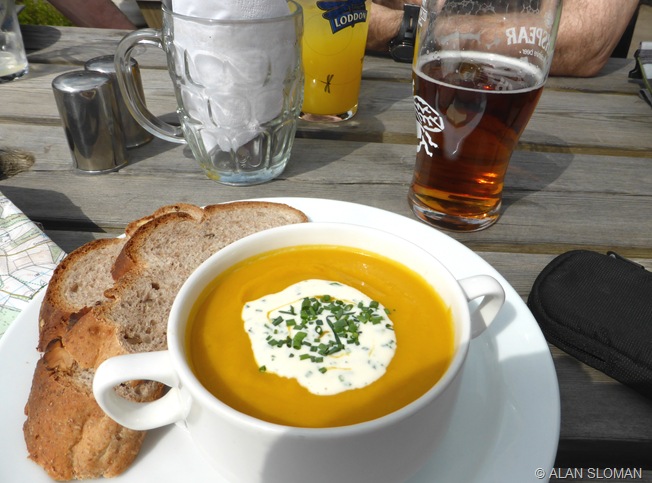 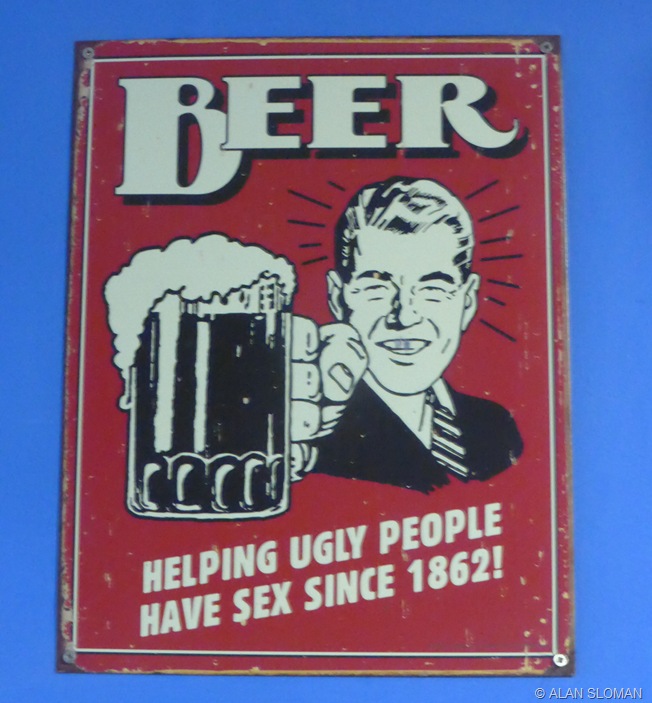 It was another beautiful day, and the woods sang in the sunlight. It was as well, as otherwise Bob and Croydon would never have found us, as they had fallen from the back of the peloton. The singing trees guided them towards the pack.

Quite wonderfully, Margaret was concerned about these bums, and actually went back to try to find them! Lord Elpus and I exchanged a knowing glance. Left to us, the Red Kites would be picking over their sorry carcasses right now. 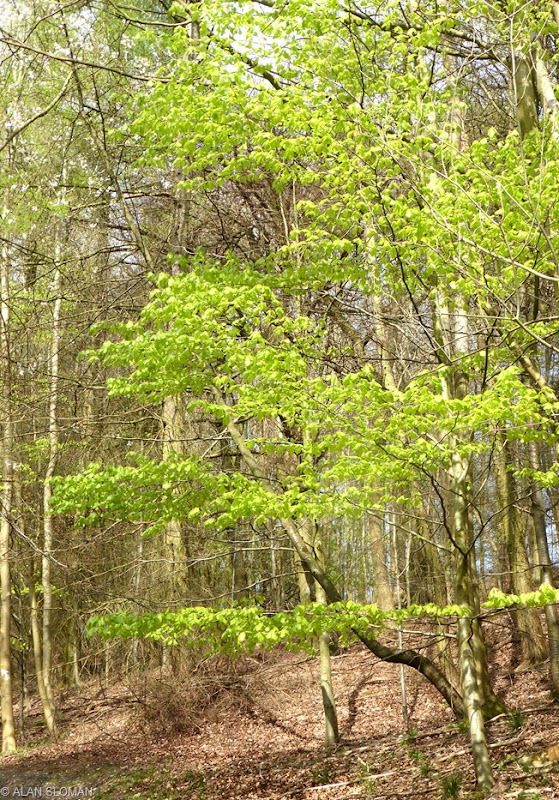 Now would you believe it! After the team’s miraculous coming together another public house hove into view. Good Lord! They served Brakspears as well. There was a short shower (whilst we were warming our bottoms by the fireside), to dampen down the dust of the evening’s campsite. 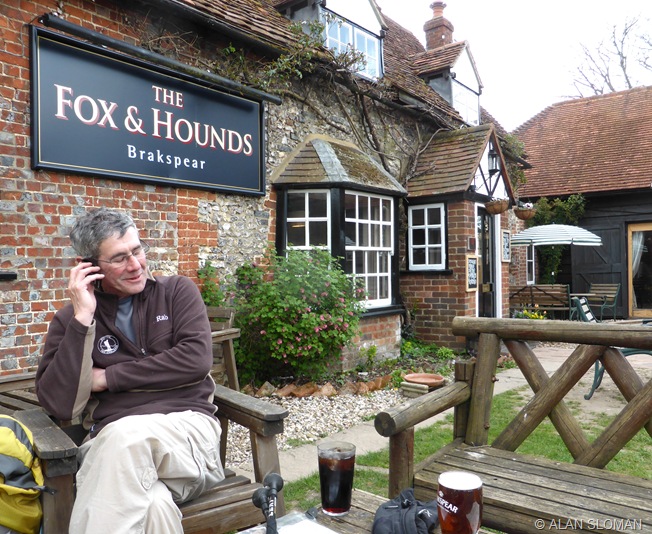 LORD ELPUS, TELLING MISS WHIPLASH ABOUT HIS NAUGHTINESS WITH TRACY FROM BOLTON. HE WILL REGRET THIS LATER. 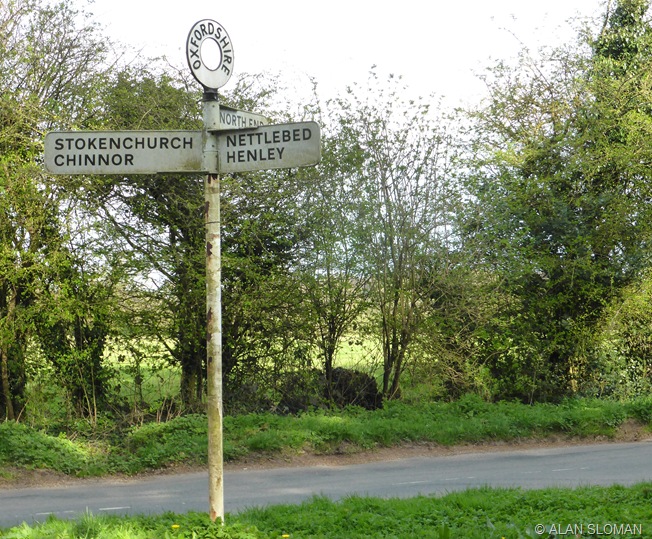 Statistically, there are far too many Ns on that signpost. I’ll leave that with you. 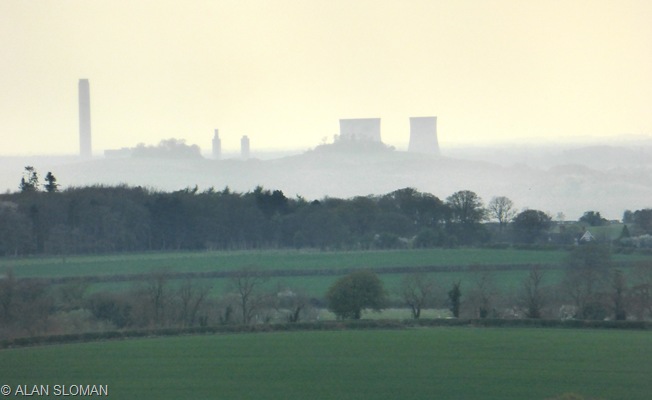 A ROMANTIC SHOT OF DIDCOT POWER STATION, WITH SOME UNNECESSARY FOREGROUND CLUTTER. 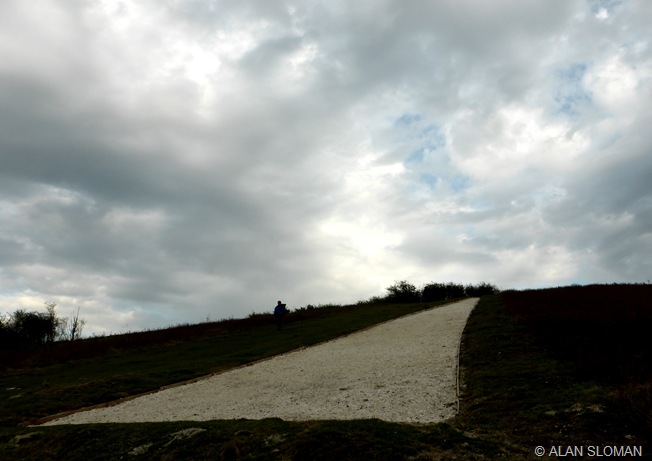 After over eleven of Her Madge’s Imperial Miles, the annual Pitch and Strike a Hike Tent Competition was held: Robin was the winner. (Fortunately for Robin, the Adjudicator ruled his own shelter out of the running.) 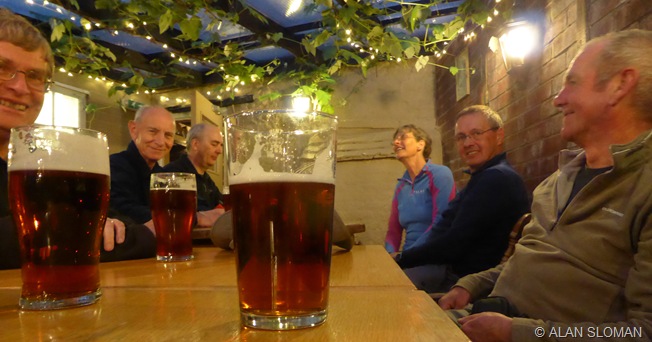 Margaret astonished the Daunderers; finding the evening venue by employing the highly unusual tactic of asking a passer-by for the directions to the best pub in the village! The Chequers at Watlington. Brakspears and Brontosaurus Burgers.

It was at this point that Lord Elpus mused he could increase the happiness quotient of Great Britain ~ lifting it from the bottom of the European list of Happy Countries. All he had to do was volunteer to man the phones at the Samaritans. Yes, granted, the death rate would rise dramatically, but on the flip side, on average, Great Britain would be a far far happier place.

That’s that sorted then. 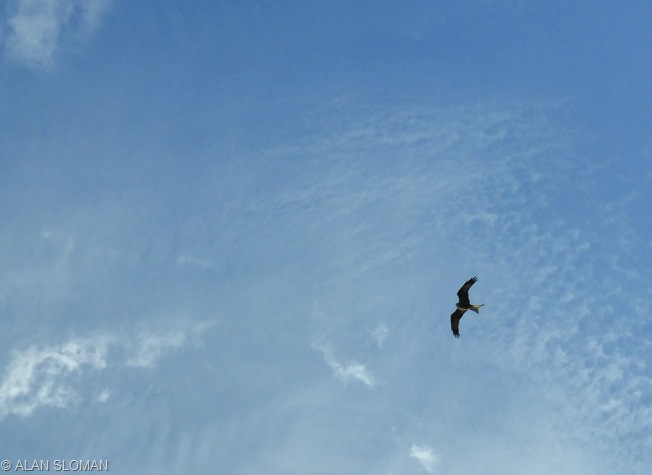 Red Kite pictures: Swarms of the things. I just don’t see it myself. What’s it all about eh? They’re multiplying like rabbits. Soon they’ll be worse than the Scottish Midge, and when these blighters bite you’ll know all about it. I tell you, it will end in tears. 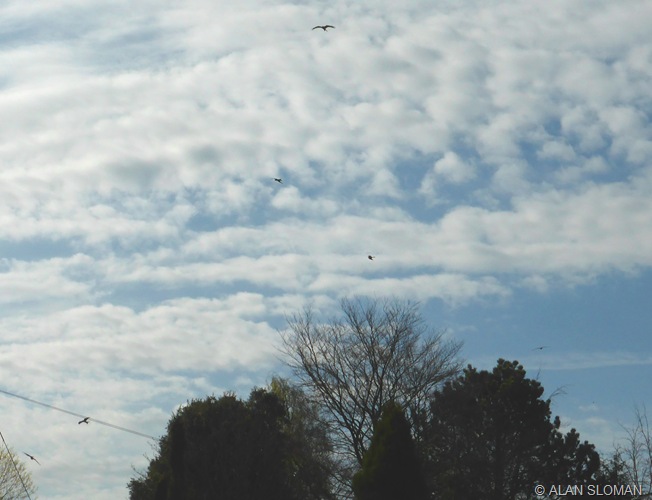 It was then but a short seven mile stroll back to the pub in Crowmarsh Gifford through leafy wooded paths and gentle Chiltern lanes, with just a few hundred Grundon Waste Disposal Lorries chucked in every now and then. But who’s counting? 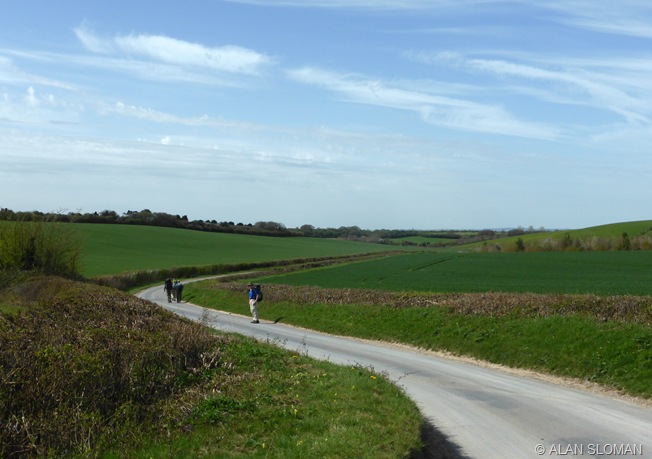 You’ll note that there are two Daunderers missing from the picture below, taken in the Beer Garden of the pub. Well, six out of eight’s not too bad an attrition rate, is it? 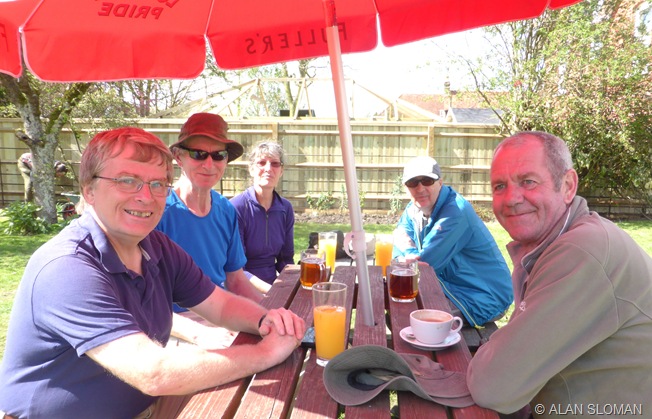 It was a jolly fine PreWalkDaunder. Many thanks to the survivors.

Plucked from the ether by Alan Sloman on Thursday, April 23, 2015