I've no idea what you have been up to since I last wrote on here but I do know it's been seven months since I last put pen to paper.  I hope you've been behaving yourselves. What's that? Really? Oh...

Since my last entry I've walked another TGO Challenge, cycled around Provence for a week of glorious gourmandising, applied for next year's TGO Challenge and was savagely rejected. Okay, maybe not savagely, in fact the letter of rejection was very carefully phrased so that rejectees wouldn't hurl themselves from the top of tall buildings.  For weeks on end there followed the Slough of Despond of the Standby List, which was followed by the ecstasy of the 'you can come to the party' email.

Needless to say, life has brightened considerably since that email. The blogging mojo has returned.

You've probably forgotten all the little  rules of this place so here's a refresher:


Right then. Off we go again!

Here we both are then, seven months later, but back in May 2018. We're about to set out on Day Four of the TGO Challenge. If you recall, we had set ourselves the daft task of walking across quite a wide bit of Scotland from west to east between two imaginary lines drawn on a map exactly 10km apart. Where's the sense in that? But there again, where's the sense in most things we bash away at in life.

I'll start by saying right from the off that the pictures of this particular walk have been taken by my companions and me. It's not obvious who has taken them, but I do have a full list of the photos and who snapped them should someone want to know. They'll have been taken by either Phil, Andy or me.

The maps are mine. They're not the Ordnance Survey's anymore as I have damn well paid for them. The fluffy cuddly Ordnance Survey once threatened to take me to court for using maps that the general public had paid for through Government grants since before time began. They have only recently become more commercial (some would say money-grabbling). It should be noted that since becoming more commercially minded the quality and accuracy of their representation of the footpath network has got far worse.

I lugged the print-outs of my maps all the way across Scotland and what you see here are scanned images of those same maps, annotated every so often to jog my memory in the future. 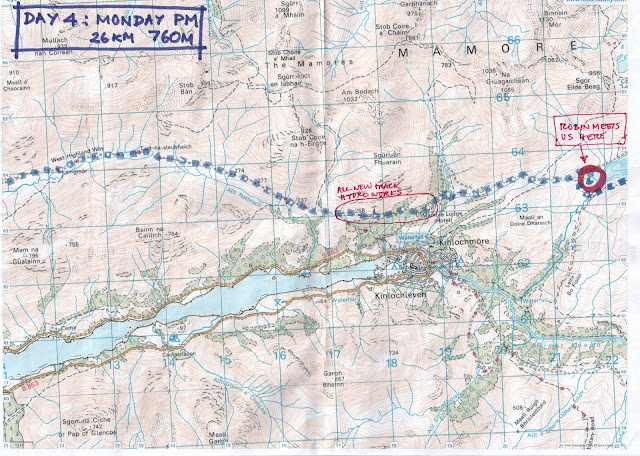 The morning's a lovely walk, slowly gaining height to join the West Highland Way, which we then follow eastwards to above Kinlochleven and onwards and upwards to camp at Loch Eilde Mor.

Here's a picture of a Highland Cow. It's expected on any blog of the Great Outdoors Challenge. 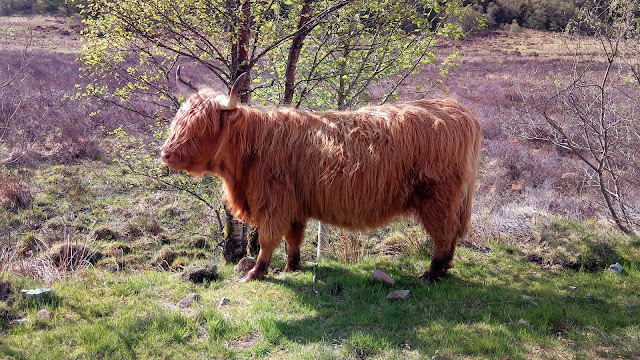 The next snap is of the delightful waterfalls above Inchree, which you'll only find by taking the small footpath above its gorge, rather than the LRT which is the more obvious route. 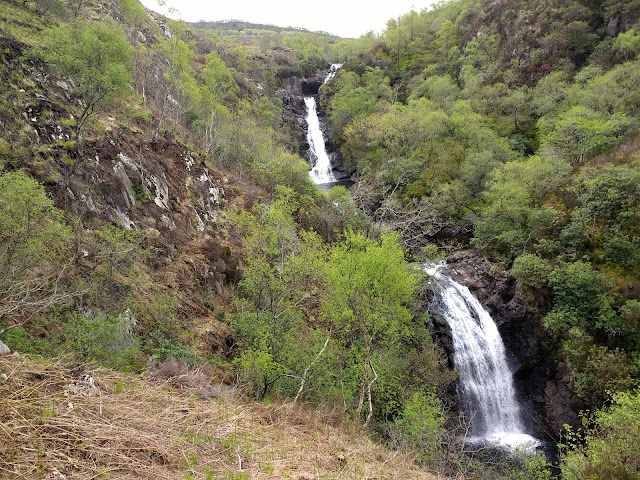 After leaving the comparative shelter of the forest you come upon the wide open spaces of Lundavra. You'll thank me as I've chosen a tasteful photograph to illustrate this section of the walk. I could have chosen an image of a semi-naked Lord Elpus wafting his underwear in the delicious breeze to cool his overheated very private parts. I don't mind the Ordnance Survey coming after me, but the Obscene Publications Squad are quite another kettle of fish.

You'll only see pictures of Phil today, as Andy had joined the Fragrant Sue to go Corbett bagging. I'm pretty sure Andy was delighted to chance upon Sue (tugs forelock as I type as Sue is a Joint Coordinator of the TGO Challenge and must be obeyed) as he was getting a tad ratty at Phil's and my more leisurely pace.

Here's a thing. Phil and I always get the miles done each day, and invariably arrive fresh and smiley at our intended camp spot to bump into our hare-like companion who has pitched camp, had dinner and knocked off a few hills before we arrive. As the walk goes on the two tortoises carry on in their own sweet fashion, always looking dapper, tidy, well fed and rosy cheeked. The hare on the other hand has achieved phenomenal mileages and ascents but looks half dead.

This section of the walk brought me out with Horse's Burial. Seemingly hundreds of West Highland Way walkers stumbling towards us, burdened by very large packs and each with at least three feet covered in blisters. Sadly, we didn't meet many smiley people coming from Kinlochleven.

Just as sadly, we've come to expect the next picture everytime we walk anywhere near Fort William on the TGO Challenge. This is because each year Fort William hosts literally hundreds of motorcyclists who tear around the highlands in these parts a week or so before our walk, ripping up the fragile peat soils. It's the Scottish Six Days Trials, and may they rot in hell.

There's the beginnings of local resistance to the event, as can be found HERE but I doubt if it will amount to much, as the Scottish Government have in the past given serious money to Fort William to help the event along.


The walking hereabouts on the WHW is speedy, if a little dull, until you near the crumbling remains of the once great Mamore Lodge Hotel, and then there's the spectacle of the fabulous view down Loch Leven. Unfortunately at the time of our visit the place was heaving with earth moving equipment and civils contractors, building yet another small hydro scheme, with its concomitant widened and  strengthened access roads. It was a bit of a mess, but the contractors were, as always, polite and good people. 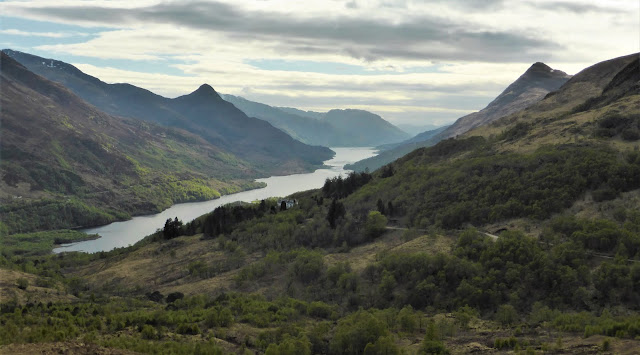 We were flagging a little on this last stage and slightly irritated that the estate thought it necessary to bypass an estate cottage by instructing walkers to scramble down the hill along the fence line of the property, to then scramble up the other side. Really? Is this really sensible?

We muttered dark thoughts to each other, but it couldn't break the happy place we'd been in all day. 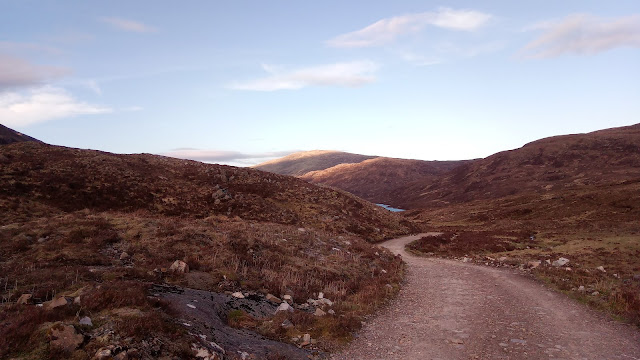 We made Loch Eilde Mor in good heart, and no sooner had we made camp when we were joined by Robin Evans - joining us for a few days walking -  and Lynsey who we had last seen a few days before as she headed out alone into the wilderness. 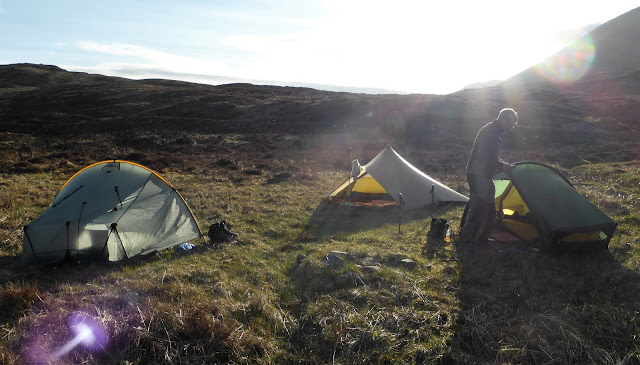 It was a little while later that Andy and Sue arrived, having done their Corbett, and a very big day to boot. I believe Sue muttered something along the lines of "If I ever mention tackling another bloody Corbett on this walk, someone fetch the bolt-gun..." 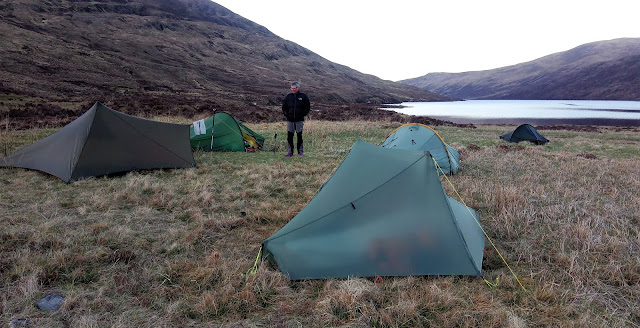 Plucked from the ether by Alan Sloman on Sunday, November 24, 2019