Here's a tip for first time Challengers (I know; another tip for first-timers - I'm generous to a fault) that will help make their crossings a perfumed joy:

If you're planning a stay indoors on your Challenge, make sure you get there early enough in the afternoon to enjoy a few cups of restorative tea lazing in your room, with time enough for your laundry to be washed and drying, and a good soak in the tub until your fingers go all pink and wrinkled. Let the perfumed toiletries do their magic, lifting away Eau de Armpit and replacing it with Fresh Mown Hay.

Ensure there is time enough for a light snooze and to eat all the packets of biscuits next to the tea pot and herbal teas. The herbal tea bags can be tossed into the foot of your sleeping bag and tumbled for a while to erase the stale foot-odour and leave your bag smelling sweetly of jasmine or raspberry.

If you're blessed with another half, make time to call home. This will earn you brownie points to ensure that you get a pass for the following year's Challenge. *Always* tell him / her that you're missing them badly.

Do all this before heading down to the bar for a couple of rehydrating beers whilst choosing something splendid from the menu. You're on holiday. Treat yourself. Have the nicer bottle and don't stint yourself; always have the dessert wine and a couple of settling whiskies.

We'll make a Second Time Challenger out of you yet!

It was for the above reasons that we chose an easy day to the Struan Inn. This short day also sets us up nicely for morning coffee the following day at Blair Atholl to celebrate the Royal Wedding of young Harry and Meghan and wish them a lifetime of happiness...

You'll see from the red note on the above map that Robin is to leave our company at Trinafour, to head north to the rufty-tufty Cairngorm National Park. However, we have yet to reach that point on the day. 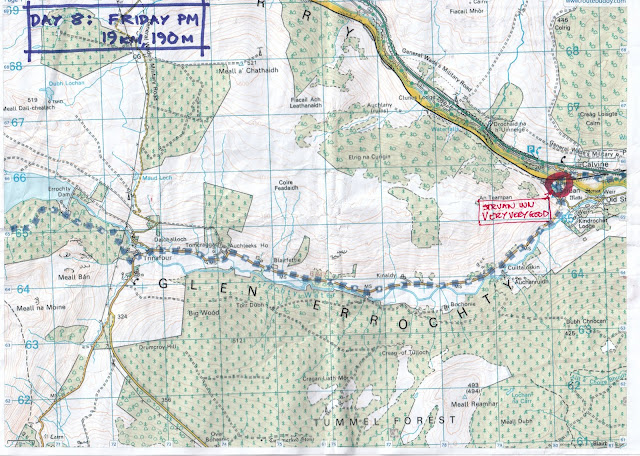 It's a pleasant stroll to the beginning of Loch Errochty alongside what is either the remains of an esker or an abandoned riverbank. On the 1:25k map it's marked as Druim Dubh. (Black ridge) I've tried to look this up, but haven't found anything that mentions it. My own choice would be the remains of an esker. Either way, I found it interesting, and it would have been a better choice to walk along than alongside the river itself which was a little circuitous. 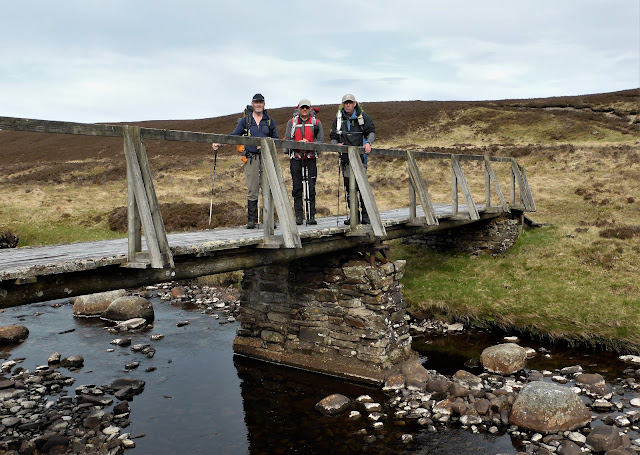 The ruin of Ruighe nan Saorach at the western end of Loch Errochty would make a better camping spot that our chosen Saunich of the previous evening. Loch Errochty itself is nothing to write home about - it's a reservoir filling in a very shallow valley with the usual tidal fringe scar.

However, about halfway along the south shore there's a splendid wreck of an old armoured car of some description. Lord Elpus appeared stunned. He was transported, back to his youth, his Army days, and he set about examining the beast in minute detail, crawling over and under the rusting relic, noting the entrance and egress of various types of munitions that surely must have torn the occupants to shreds. 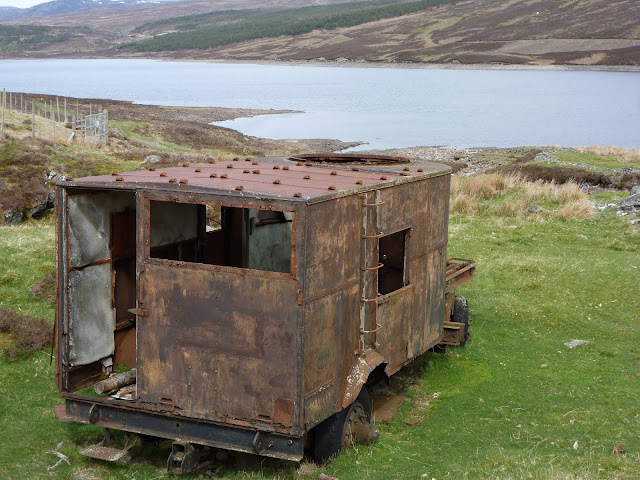 His eyes seemed to mist over; his whole demeanor changed to that of the dashing young Cavalry officer that he had once been, addressing his men. He stood tall and proud, yet in a trance-like state. I caught the odd coherent phrase and was quick to scribble them them down in my Moleskine notebook:

Then suddenly his voice changed to one of urgency, his sinews standing out on his neck..  'Helmets, Helmets'... Down, boys, Down!... Incoming, Incoming!' Drive! Drive! Drive!'

I abandoned my note-taking to steady his shaking body and tried to soothe the poor chap. I gently spilled my remaining port between his foaming lips. Slowly, colour returned to his pallid cheeks and between sobs of 'Nurse!' and 'Where am I?' and sudden bodily tremors, we brought him back from the brink to the present day.

As we walked on our companion seemed to be a wiser but somewhat sadder creature than just ten minutes beforehand... 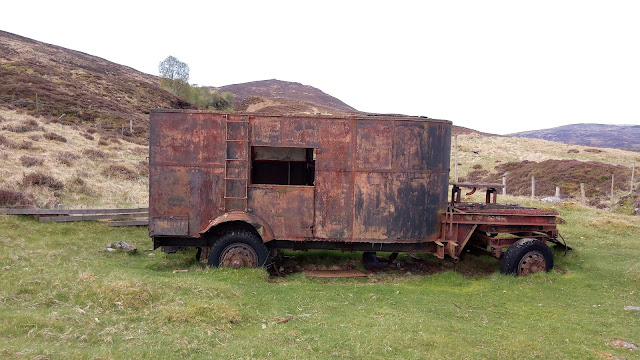 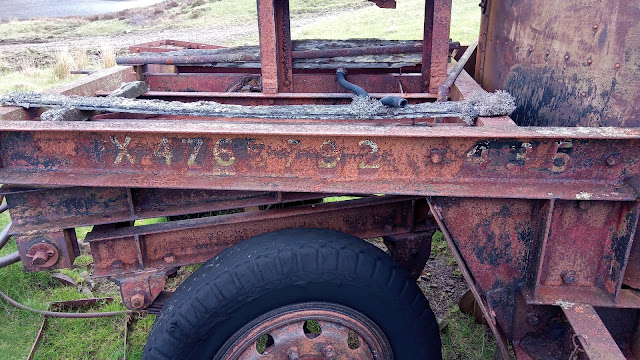 This excitement had been exhausting and so rests were regularly called, with tootsies airing nicely in the cool breeze and warm sunshine. Mad'n'Bad, forever the scholar, admirably continued his coursework. He's halfway through an Open University degree course entitled 'The Descent of Man.'

We wrapped Lord Elpus in his jacket with the linen strings until the shakes subsided. He could then be released safely for some clear soup. 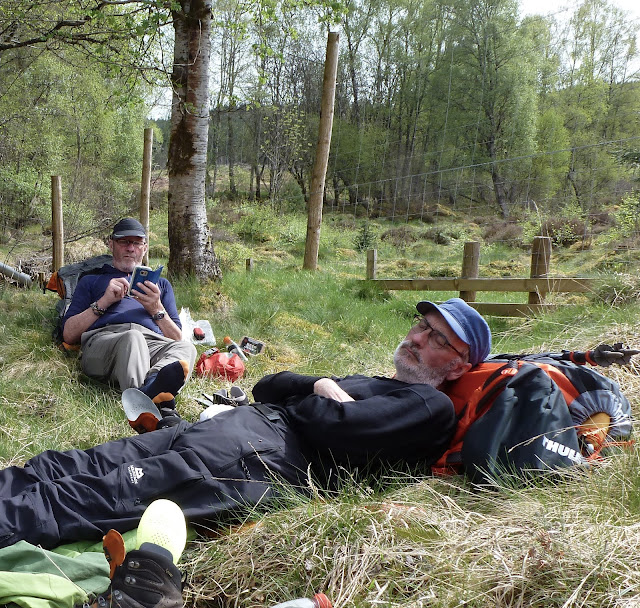 After a delightful young summer's morning strolling along the quiet lanes, finally, our gods gave us a sign!

And Lo! There was much joy.

Despite our shameful slacking and lassitude we had arrived at the Struan Inn well before opening time. We sat outside in the beer garden, occasionally to stand to peer through the windows to the darkened interior to see faintly lit beer taps. So near and yet so far.

However Lady Luck smiled upon our hopeless plight and after a scraping of ancient bolts and heavy chains being dragged clear, the door was thrown aside and the wonderful Landlady invited us to quench our thirst.

If you have been paying attention you'll know that the next three hours were spent in a miasma of suds, cups of tea, and fettling of all things gear to prepare for tomorrow's Royal Event. Scrubbed boots atop radiators, sock-squeezing in hotel towels, map-folding, trouser leg laundering, steaming shirts and shreddies.

Lord E had turned down his invitation to the celebrations at Windsor as he had a prior engagement in Scotland. H&M were very good about this and promised him small replica wedding cakes to be consumed in Blair.

To cap it all, they also sent their Ambassadors, in the shape of Vicky and Toby, up to Struan to celebrate in style with good food, plenty of drink and a tiny Page boy.

Plucked from the ether by Alan Sloman on Sunday, January 26, 2020