As regular readers will know, I usually post our route sheet and OS maps as part of my TGO Challenge blog. I believed that this tied the words and photographs together to form a more complete picture of our days. Of course, I realised that occasionally small parts of these routes would be included in other Challengers' routes in the future. Indeed, I have on the odd occasion exhorted people to go and see a particular chunk of a route for themselves as I thought it had been such a wonderful experience and I wanted other people to share in it. Usually this was because the route was not immediately obvious on the map.

A fine example of pinching a really good route was our first two days of this year's walk. I lifted the route almost wholesale from Louise's excellent write-up of her 2017 Challenge. You can find her walk HERE. However, I changed our own route slightly by stopping sooner on the first day and lengthening the second, for quite a few reasons that will become apparent when you read on.

Half the fun of the TGO Challenge is designing your own route - your own personal challenge - across the mountains and glens of the Scottish Highlands.

I was very surprised and slightly disheartened to find a month or so ago that this year a Challenger had lifted one of our routes in its entirety and had submitted their route sheet that was to all intents and purposes exactly the same as that shown here on my blog. I say I was disheartened and this is the truth. Planning your own route is tremendous fun, and only you know what you can handle each day, day after day for two weeks.

It's in my style of writing that I very often make light of how difficult a particular day may have been, whether due to terrain, weather, lack of fitness or whatever. An unwary and perhaps slightly less experienced Challenger might well struggle with the days I plan for Phil and me or conversely they may find it a complete doddle and have a less than challenging Challenge. This would be a real shame and it is certainly not in the spirit of Hamish Brown's excellent plan for the Challenge forty odd years ago.

Sadly it transpired that this was not the first time the Coordinators had received a direct copy of one of our routes.

The upshot of this is that I shall no longer include our route sheet or maps in my TGO Challenge blog posts.

This means that if you want to lift a route you'll have to do what I did with Louise's excellent report and work the route out for yourselves. This means taking a good hard look at your own maps and working out for yourself where we went. This will involve effort and evaluating the relative merits of the options that are available to you when you plan your own route and then making your choices to your heart's content.

So, enough of the gloom: Let's get on to our first day of this year's TGO Challenge!

The condemned men ate a hearty breakfast and we agreed to assemble at the hotel reception at nine o'clock sharp so that we could sign the Challenge register and head off into the Great Outdoors. Whilst signing the register the heavens opened and there followed much scrabbling about to find and don waterproof coats and trousers. It's sweaty work climbing into rain gear indoors and so Phil, David and I headed off outside where it was bloody freezing cold.

But where was Andy? I then discovered that Andy had made a side deal with Alastair that we would all walk together today as our routes were essentially the same. However, Alastair was nowhere to be seen and was apparently upstairs packing...

Sod this for a game of soldiers. I took the customary snap of (some of) our group beneath the wonky Lochailort Inn sign and decided to head off. Andy and Alastair walk incredibly quickly so they shall jolly well catch us up. A schism! And we had no even started walking! This had to be a record.

The trudge along the main road to the hill path passed uneventfully. Fish lorries and caravans were given short shrift if they passed by too closely. Soon enough the laggards caught up and so we were finally a team of four plus one lovely fellow. Quite why this paragon of virtue wanted to be associated with our motley crew escaped me but Alastair was welcome company. Besides, he could keep Andy company in the far distance. It's sweaty work climbing alongside the Allt na Criche and the rain eased off so overtrousers were stuffed back into overstuffed rucksacks once again. 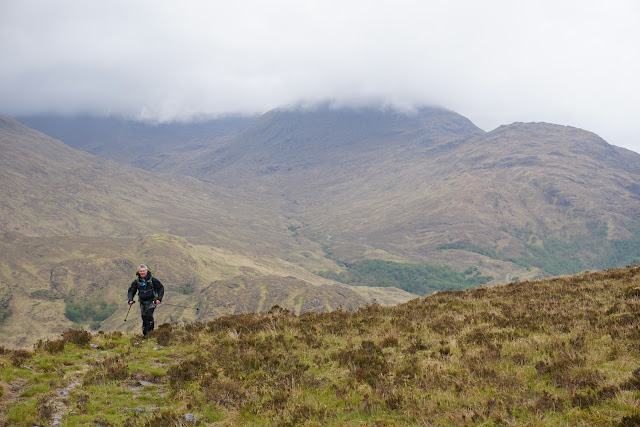 Walking with Alastair for the first day and a bit provided a pleasing symmetry as the previous year we had walked with Lynsey, his wife, for the same period of the walk.

As we climbed the views began to open up westwards, but with them came the realisation that we were in for a bout of filthy looking weather. The forecast hadn't been good and with time we realised we were in for a bit of a battering. 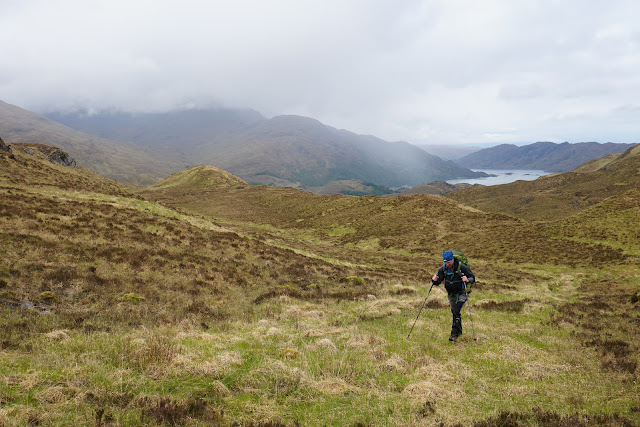 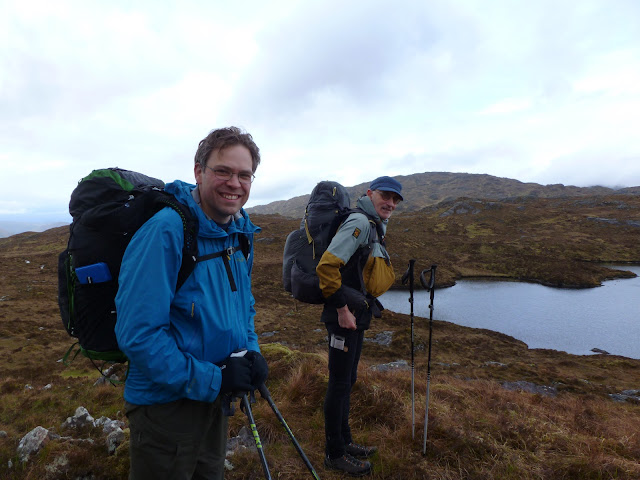 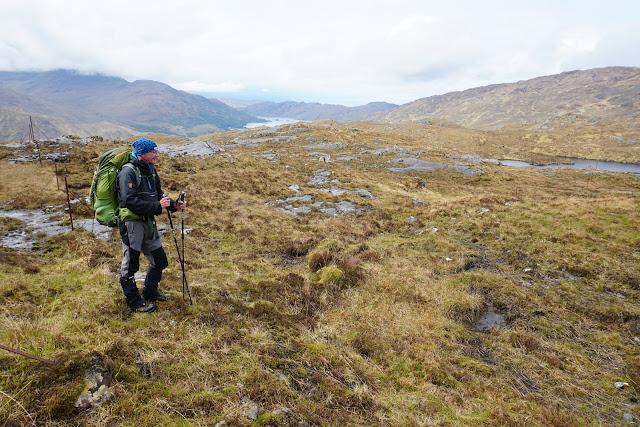 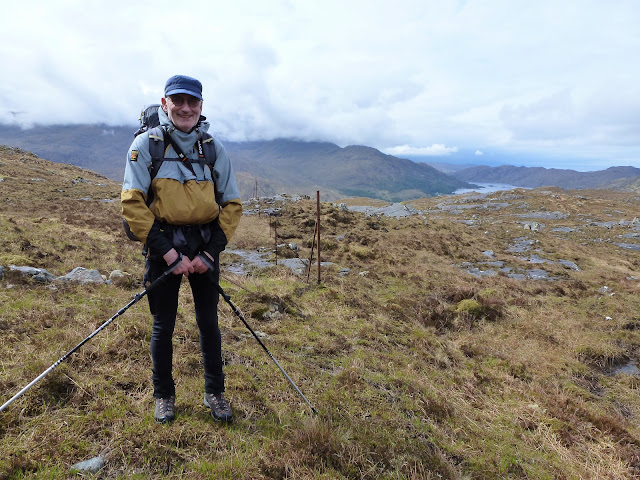 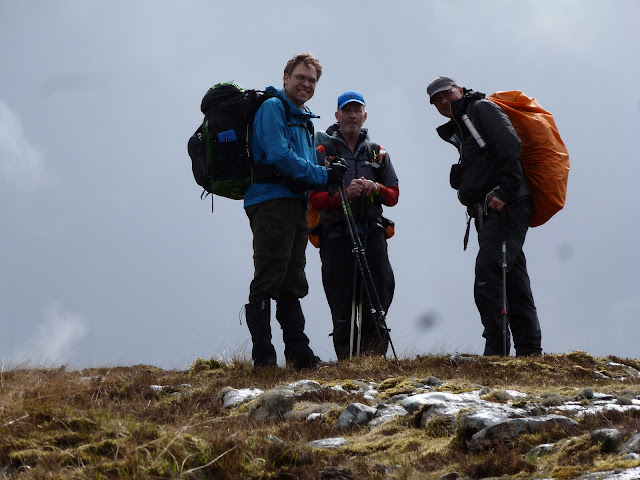 I'm not quite sure what the three at the front are discussing, but the two at the back are looking at the fast approaching weather and deciding to have an early lunch whilst it isn't pissing down, as there is not likely to be much shelter for lunch further on, and besides, lunch in the rain and wind doesn't sound too wonderful.

As soon as we climbed up to the three we decided on lunch as soon as possible.

Lunch was an uncustomary hurried affair or around half an hour. Whilst chewing on my cheese and cucumber I noticed that the rock architecture of our ridge is decidedly set against us.  The strata comes out of the ground almost vertically, but pointing towards us.


Our ridge is made up predominantly of metamorphosed sandstones (psammites) and mudstones (pelites) all tilted at a crazy angle due to the enormous forces caused by various geological thrusts. The map below will help explain this. You can click on it (and any of the pictures, of course) to view it at a much larger size. The rocks dipping at a very sharp angle help to produce very trying walking conditions with fierce little ups and downs that require a fair bit of zig-zagging to make best headway.

No sooner had we packed away our lunches the temperature plummeted and the wind started in earnest. This was then followed by rain, and hail and then of course stinging pellets of snow.  At this point I decided that my delicate little pinkies required some protection. I had bought a pair of absolutely gorgeous (and expensive) gloves from this wonderful people at Arc'Teryx only a few weeks beforehand and this was to be their first use.

Could I get the blighters on? They slip on beautifully in a nice warm shop in Picadilly, but when my hands are bitter cold and soaking wet on a freezing cold Scottish mountain, I just could not get them on. It took me a good few minutes to struggle into them. I was not happy. A lesson learned.


We're handrailing the line of the old fence along the northern lip of the ridge and I'm finding it hard work. This softy southerner hasn't done much hill walking since last year's Challenge (all of a very few boozy days in the Lakes) and either Phil's a perfect gent and looking after me, or he's finding it all a bit of a struggle too.

I'm judging our progress by our views of the lochan on the other side of Loch Beoraid, and we appear to be crawling along... We're in and out of the very wet clouds and it's pretty cold. At least the wind is mostly behind us. 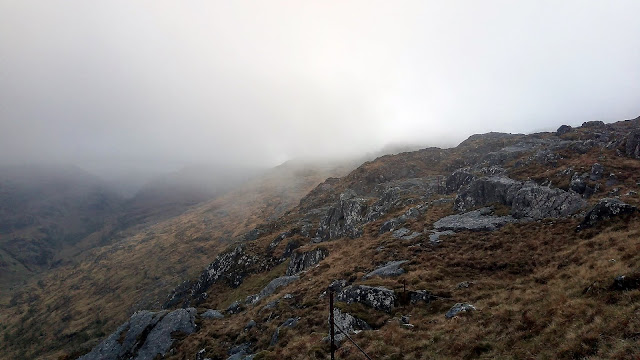 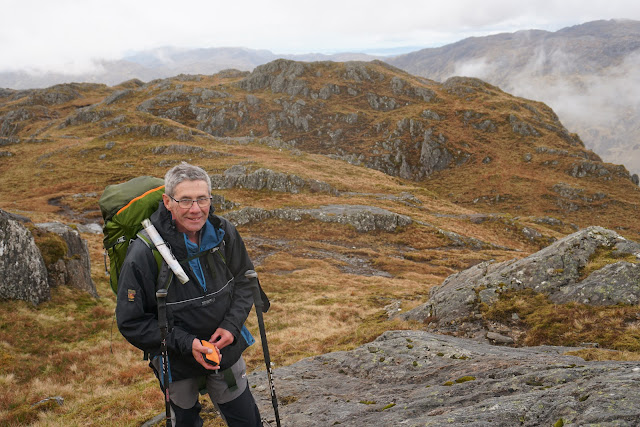 Of course, the tantalisingly close Front Three are nothing of the sort. There is another great drop and clamber between us and them, and when we finally make the top of  Glas-Charn the Front Three have descended to a more sheltered spot. It is at this point that the weather finally clears up. Praise Be!

We spend a while on top taking in the views, still mostly obliterated by soggy grey torn clouds but basking in our achievement. This had been considerably harder than we had imagined it to be, even though we knew from other Challengers that it is a tricky ridge. 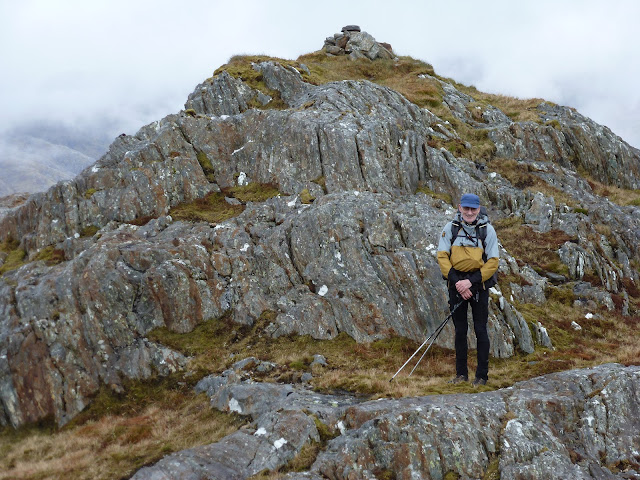 Eventually we drop down to the Front Three as they head down the hill. Alastair has a hotel to catch in Glenfinnan and a wife and children to talk with on Facetime.

Phil and I are in no particular hurry so have a lazy forty minutes eating and drinking and generally relaxing into our walk as the weather brightens considerably. The views are at last opening up again and the rugged western hills do not disappoint. But all good things have to come to an end and so eventually, reluctantly, we shoulder our packs and make our way carefully down the rough hillside. We're careful not to be suckered into the little stream gorges as they look to be tricky.

Following the fence line down, once we're at the bottom we cross some boggy ground to collect the Allt a Feith Chatha. I'd picked out a few possible spots for our tents from satellite images and, whilst not being putting green smooth, were perfectly okay. However, there was not a sign of the Front Two (Alastair presumably having left them for fluffy towels and flat white sheets and carpet between his toes). I knew that there was likely to be few better pitches lower down the valley and then there would be the mess associated with a new hydro track. Neither Phil nor I fancied camping alongside a road with the associated Contractor's rubbish strewn all over the shop.

Sure enough, Andy and David had parked up on the side of an 'improved' river course. Their's was a stony exposed spot within eyeshot of the new gravel road. I didn't fancy that at all. Phil & I headed up onto softer ground and made the best of it.

It's amazing how a few whiskies, (lung inflators) a lie down and a cuppasoup improve the mood. We toast Louise, as this had been her route, but she had walked on down to Glenfinnan to camp next to the church. She had been walking solo. Chapeau, Madame!

The Front Two pop over for after dinner drinks and  say hello and we are all Besties once again. Things are all good once more.