The Ordnance Survey say there's a path up Glen Sulaig and over into Glen Loy which becomes a track at Achnanellan (or Achanellan if you're using a 1:25k map), a distance of about 6km. Admittedly, on the very odd occasion there is bruised grass, but never in your wildest imaginations could it be described as a path. However, the sun was shining, it was warm enough to start the day in shirtsleeves and the day ahead was not arduous.  We decide to leave at a leisurely eight thirty.

Andy forwent the ridge today to walk with his pals. There's a first for everything.

The recent weather had been kind and so the ground was gently soft. I would imagine if it had been wet this first 6km over the gentle bealach could be a bit of a morass.

We had an early lunch stop at the car park a little after Achnanellan/Achanellan. All about us was the sound of birdsong, the gentle plashing of the River Loy and a breeze whistling in the silver birches. Imagine if you will, sun dappled shade and warm earth to lie upon.

And then, out of the blue we were besieged by hordes on touring bicycles. Now, I don't know about you, but if you and your London and Home Counties chums were out on your bicycles in a beautiful Scottish glen and you came across four hikers gently slumbering in the sunshine you wouldn't go about the place shouting to each other and disturbing their peace. You wouldn't stand so that your shadows fell across the otherwise blissfully happy, warm slumbering walkers, would you? No, of course not, because you're a decent sort. This crew of middle aged, entitled tossers who had no manners whatsoever obviously have different standards to you and me.

They happily wrecked my blissful happy place for a good ten minutes before they fucked off, noisily. I just wish they had fucked off twenty minutes beforehand. I hated them. And I'm fluffy and cuddly. Honest. If I'd had one of those big red buttons I'd have happily pressed it for each of the chinless idiots so that they disappeared in one magic "Pouff!" of purple powder.

I felt djangled. I felt abused, rattled and generally pissed off. My lovely stroll down this idyllic glen had been well and truly ruined.

Andy decided he was going to find a track in the woods so that he would not have any more tarmac bashing. I assured the good fellow that according to my maps there wasn't a track to be found on this side of the river for at least another quarter of a mile. However he was having none of it and plunged in to the birch and bog in an uphill direction in search of softer ground.

I didn't see Andy for another five miles or so. I believe he had a torrid time of it fighting birch, spruce and bog for quite some time. You really mustn't laugh. It's not kind.

I'm not quite sure how but the remaining three also split three ways over the road walk. I spent a happy time lying in the woods next to the river just shy of Errocht. Phil had disappeared for a call of nature, and the VeryVeryNiceMan had ambled off in his own world.

Then there was the foot tunnel beneath the Caledonian Canal to negotiate. It's actually quite long and dark after the bright sunshine. It was also full of water to a depth of *just* below my boot cuff. I emerged blinking into the sunlight at the south eastern entrance happily dry-shod. Others in the party might not have been as fortunate. 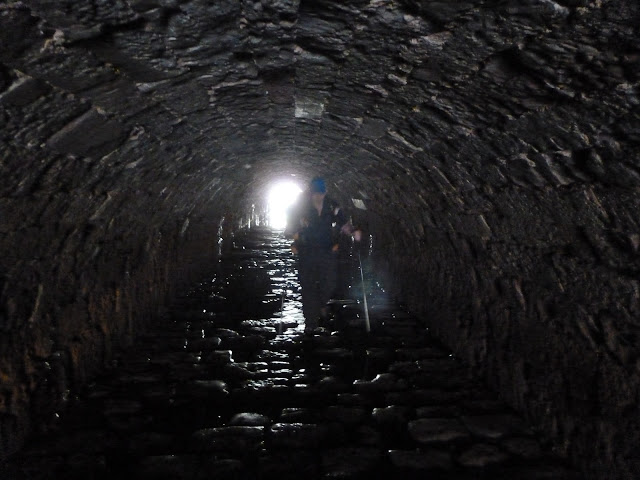 We finally reassembled on the cycle path alongside the Caledonian Canal as soon as was practicable. Today we were expecting to be joined by Robin for a few days together, as we had done the previous year. But there was a disaster! Robin had done his damaged knee in again and was currently hobbling around Fort William wondering what to do.

Lord Elpus took control of the situation with his customary aplomb. Robin was required to gather as much provisions as he could possibly muster for the cheese and wine party that he would no longer be able to participate in in two days' time. There was to be all manner of cheeses, various flagons of wine, some nibbles, chorizo and bread sticks. Olives! Yes, and don't forget the cashew nuts and napkins... Robin was required to do the shopping and get a taxi to join us at Torness, where we would sort it all out between us. 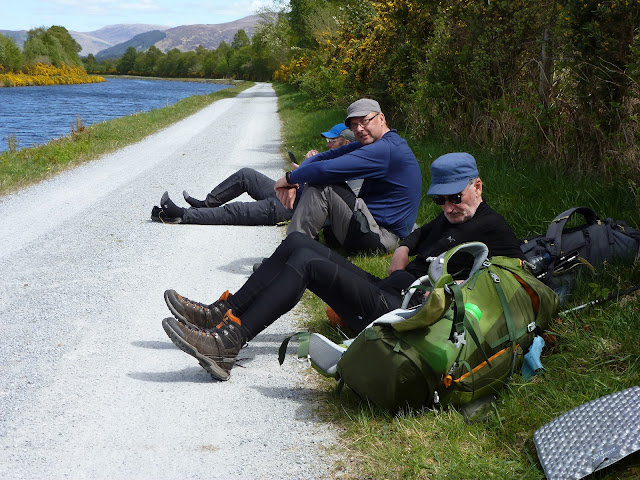 Of course, by the time we strolled into the campsite Robin was already there, pitched up, showered and immaculate, as only he can be. He did look to be in some considerable difficulty as he had a pronounced limp. We very generously offered him a few snifters of the drink that he had just bought, for medicinal reasons, only to realise that the Gent was off the booze as it gives him chronic migraines... He gets our Shiny Star of the Challenge Award for efforts above and beyond.

The camp site has all the facilities required but the pitches are a stony horror. Pegs can be bashed in to a total depth of a couple of inches at best. We prayed for a calm night, which was incredibly stupid thing to do as the midge promptly swarmed and we were eaten alive in the evening and the following morning.

Who should then show up but  Pooley Bridge - that incredibly nice fellow. He had tales of woe. He had been High that day and had noticed that the ridge where we intended to have our Cheese and Wine Party in two days' time was completely slathered in deep snow. This was Not Good.

After a quick conflab, a phone call was put into Challenge Control to let them know that the location of the Cheese and wine Party would be changing to the river bank opposite Melgarve Bothy. There was still time to warn party goers of this change. Very kindly, Control passed this message on to all those intending to attend.

After saying our farewells to Robin our day started with an easy path through cow pastures, Now, one of the Font Two - yes Alastair had abandoned us again -  is none too good with cows and so Mad'n'Bad shooed the calves away from the mothers just to make things a little more exciting for the VeryVeryNiceMan.

After a respectful rest in barbed wire bovine-free corridor we made Glenfintaig Lodge and the lung busting tarmac climb for a few hundred yards up into Glen Gloy. It's a delightful three mile stroll up the glen on the public road and the Lord only knows how, but someone managed to snap a picture of Andy when he was actually behind us. This was a rare moment.

At Upper Glenfintaig Lodge Mad'n'Bad took the Andy Fine Weather Alternative route and headed once more up to a sky line to our east to meet us later in the day. This left the new Three at the Back, or perhaps a new Three at the Front. Either way we strolled up the fine track bathed in sunshine and a cooling breeze.


At some point near the head of the glen, paths peter out and we picked our way over the shallow bealach to collect the Allt a' Chomhlain. I love this sort of country. It's a boggy tussocky sort of place within open woodland, fallen trees and meandering water courses. It's a puzzle and I adore it. I'm not sure my companions feel the same way about these places but for me it was the highlight of the day.

Eventually a fence crosses our path, and I seem to remember a stile. It's wide open country up here with clean air, insects lizards and all sort of tiny creatures that choose to make their lives here. It was then a simple matter of collecting the upper Parallel Road where we also collected Andy, who we had seen descending from the ridge for a good half an hour beforehand. It's wonderful walking. A straightforward descent into Glen Turret later and were were very soon tucking into our suppers on a shallow river terrace.

Inroads might or might not have been made into some of the Cheese and Wine supplies, as it was deemed a sensible thing, indeed a right and proper thing to do for another day done, and well done too. We toasted Robin, Robin's knee and absent friends. There seemed to be quite a few of those to raise our glasses for and so it was deemed appropriate that a few more reserves from the Cheese & Wine Party storage facility should be released from bond.

Plucked from the ether by Alan Sloman on Saturday, March 21, 2020