The Challenge Coordinators requested a little while ago that I did not include maps of my routes in my write-ups anymore as they've found that some Challengers have cribbed the route entirely and presented it as their own for scrutiny by the Vetters. I would point out that this negates the whole point of the Challenge. The Challenge is surely to design a route yourself that you think will be close to the edge of your abilities, in terms of navigation, self-reliance and fitness. This means that when you arrive at the east coast you will have an overwhelming sense of satisfaction.

Quite a few have slavishly copied my routes and found to their cost that they were either way too difficult for them, or conversely not much of a Challenge at all! (The latter group will be the incredibly fit but clinically lazy Challengers...)

My route this year, as explained in the previous posts, was designed so that I could struggle across Scotland with a low blood count, a sackful of prescription drugs, a complete absence of any fitness and very tender stomach muscles still knitting themselves back together having been cut wide open barely three months previously.

If you do decide to slavishly plagiarise this route I can assure you the Vetters will spot it, and you will be asked to resubmit a route of your own design. In all likelihood you'll probably find it a little tame, even though I found it an incredible struggle.

There. Now you're told! So, be good, sit up straight at the back, and let's get on with the walk.

So with the preamble out of the way you can see from the map that this day should hold no terrors for anyone thinking of taking on the TGO Challenge. If it does, then I think you might struggle with doing the Challenge.

Distance: 22km
Ascent:    660m
My day started at the bus stop at the Kyle of Lochalsh where I took a sneaky peek at the weather forecast for the next few days. Why I did this I really don't know because the forecasts are merely a best stab at what a computer prints out which a team of forecasters then play with.

The day was to be very kind to over a hundred Challengers starting today. This is very good news as it puts a good day under your belt as a store of happiness before it belts down with rain and crushes your very soul.
Ian, who was also staying in the Kyle Hotel, is a veteran (in every sense) of seven successful crossings and sported a tiny rucksack. To reduce weight Ian wasn't carrying a stove or any of the associated paraphernalia. Slightly surprised by this at first, as I strolled across the Highlands his approach seemed to make more and more sense. We'll have to see if I'm adequately convinced by May of next year.
The view from the Kyle bus stop is really quite something. This service is used by a dozen or so school children. I wonder if they realise quite how blessed they are. 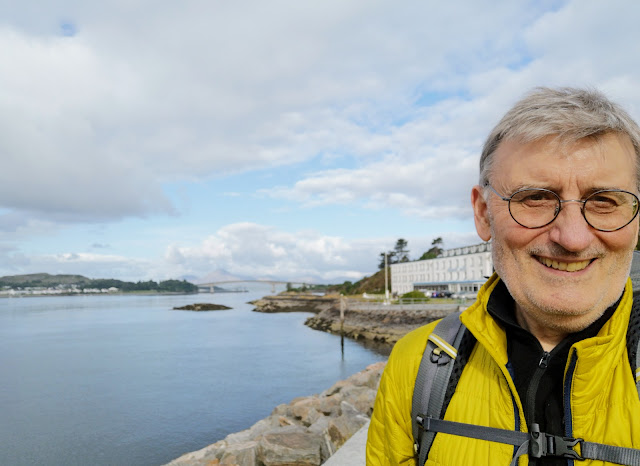 The bus dropped me off at the Kintail Lodge Hotel on time and as I was adding my signature to the register of starters, Paul appeared, to do the same. I've put a comma in-between 'appeared ' and 'to' as I didn't want to give the impression that he merely appeared to add his signature.
And here is the young man, in a different outfit today. If you're keeping up, yesterday he was dressed very smartly all in black, a bit like a rugby referee. You know there will be questions at the end of each post, don't you?
The first six miles are on the flat, which is fine way to ease yourself into the walk; It's a time to fiddle with boot laces, errant rucksack straps and remember that you left your spare waterproof matches in the bathroom. Don't ask. Paul very kindly adjusted his pace to 'Dead Slow' and we ambled our way into the day. Our first stop was Allt a' Chruinn for the petrol pump picture. It had to be done as Phil & I had stopped here twenty two years ago, amazed even then that the pump was still there. Being incredibly old, Phil had taken the time to explain to me how it worked and how as a small boy he had been sent down the mines to dig for petroleum. And all for three ha'pence a week.
I seem to be wearing the same rather fetching outfit as I had back then.
A mile or so later and we were examining a board explaining the Affric Kintail Way - a fairly new Scottish Trail. To be honest I'm not a great fan of these in Scotland as they seem to channel walkers to a defined right of way. Before you know it newer generations of hill walkers in this land of unfettered access will have taken the mindset of those in England & Wales and follow prescribed routes rather than create their own in this land of incredible walking opportunities. The TGO Challenge actively encourages walkers to find their own way across Scotland; that's why it's so special.
Having stopped now umpteen times for pictures and all within the first two miles, it took all my persuasive powers to halt this walking machine just ten yards further on to visit the last ice-cream shop for three days...
He was rewarded with a four mile proper leg-stretch, albeit at a slower paces than he is accustomed to, up Gleann Lichd to Glenlicht House for a drink and snacks before the climb of the day. Even though bright and sunny, the wind was quite keen and kept temperatures down so that we were on our way in reasonably short order.
The next section warms you up, as it's a climb of around 300m in 2 km at a steady pull all the way. We took it fairly evenly and I slowed things up by taking snaps with the phone. This route out of Shiel Bridge has to be one of the best first days, in that it leads you gently into spectacular mountain scenery.
Just 14 km from our start point we pass over Scotland's East-West Watershed at Cnoc Biodaig. Whenever I come this way I'm always amazed that it's so close to the west coast. So, that means it must be downhill all the way from now on then...
It's now just a nice walk passing Camban Bothy - considerably improved after my stay there in 1999 - and then dropping down to Alltbeithe Youth Hostel, where I had a mini snooze in the sunshine. Paul had further to go - to the beach at the west end of Loch Affric - so he carried on. After a very relaxing time I sauntered off for my last couple of miles to my chosen camp spot. It was all very peaceful, but worryingly the wind that had been with us all day was now beginning to drop. And that could mean only one thing...
Midges! 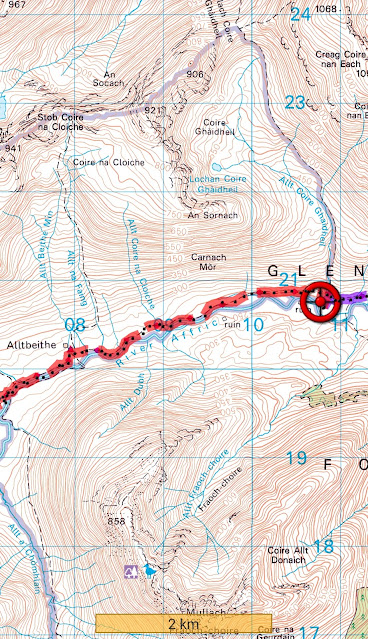 This was only the third time that I had pitched the Notch. It's a fairly easy pitch once you realise that the pole tips need to be at the same height when on uneven ground to get the cross-ridge level. After that, it's a doddle. There were still a few things to learn about the pitch-lock ends but for tonight it was good enough as I was surprisingly tired when I finally lay down. I didn't bother cooking, as I hadn't eaten anywhere near enough of my day-food so I feasted on chocolate peanuts, yoghurt-coated cranberries, cheese rolls and gallons of orange squash - plus almost a bucket of pills that would stop me from dying a terrible agonising death. (That's a joke... ish)
On a normal Challenge there would usually be a cluster of tents pitched hereabouts, but with the numbers reduced by two thirds this year I had the place all to myself. It was quiet and as the wind dropped the only sound was the patter of thousands of tiny midges dancing on the taught flysheet and the gentle plash of the stream nearby.
Now then, this video need to be played at Volume 11.
Plucked from the ether by Alan Sloman on Monday, October 18, 2021