The west of Scotland is magnificent - steep sided mountains soaring straight from the sea to dizzying heights. The weather changes from warm sunshine to horizontal sluicing rain in minutes with a dazzling array of lighting effects.

For a Challenger walking from the west coast this magnificent scenery has its downsides. Starting from sea level means you're exerting considerably more energy climbing, whether you're sliding on your belly over the bealachs or stretching for the summits. The changeable weather means you've to carry all manner of clothing to suit every whim of Heather the Weather or young Mr McCaskill.

Today, to keep you anchored in reality I'll mention that it is a Sunday - a day of rest - and I'm the last foot passenger to board the Corran Ferry at 8:30am, having breakfasted well at the Inn just a few steps away. I'll be starting at sea level then. All that height gained so far on the walk is now history.

So let's cross the Corran Narrows and I'll meet you on the other side: It's no more than a five minute journey. 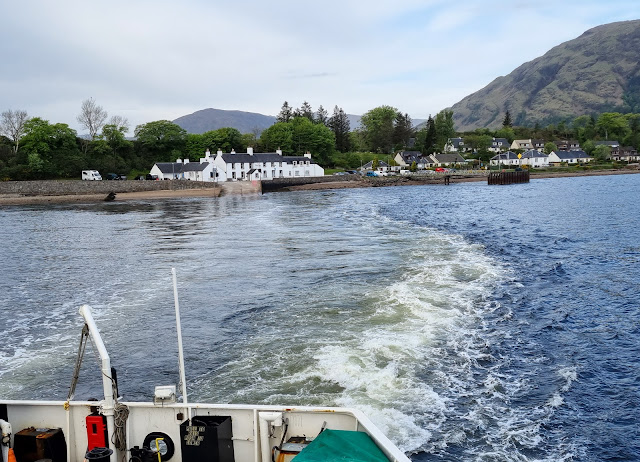 I couldn't take the footpath from the carpark to the waterfalls viewpoint as it was closed as trees had been blown over in a storm and had yet to be cleared. It was a simple walk up the track and then continuing to the head of Glen Righ - a pleasant undemanding five mile walk.
Looking back to the Corran Narrows had me thinking about how they were formed. After a bit of Googling it seems the accepted theory is as follows: [which I've copied from this source, as it's written in a more accessible voice than that of the British Geological Society's explanation:  https://kilchoan.blogspot.com/2010/05/corran-ferry.html ]

The narrows were formed by the glacier which gouged out the Great Glen and the trough now occupied by Loch Linnhe. At the end of the last ice age, when the glacier was retreating up its valley, its snout - the point where it melted - stopped for a time at Corran. At this point the ice, being lighter than the sea water into which it was flowing, lifted off the bottom, leaving an underwater ridge. There are many other examples of this feature, the other well-known local one being at the Connel Bridge near Oban, where the outgoing tide flows over the ridge to form the Falls of Lara.

That's all well and good as far as it goes but it doesn't explain why the Loch Linnhe retreating glacier stopped, or paused, here. Looking at the above picture in combination with the map that you've opened and blown up in a new window, you'll see that above the narrows is Coire Dubh and from the map you'll see its glacier dumped a massive end moraine between Ardgour House and Keil House. On the opposite side of the narrows there would have been a substantial glacier in Gleann Righ, flowing away from the ice cap that incorporated the Ben Nevis group and the Mamores. This would have supplied both lateral moraines and an end moraine to add to those from Coire Dubh. These two sources would have grabbed at the retreating Loch Linnhe ice and piled up and added to its lateral moraines as well as the retreating terminal moraine. Subsequent tidal forces produced the spit that forms Salachan Point.

A quick look at the map suggests that the narrows at Ballachulish have been formed in the same way, provided this time from the massive resource of the huge corries of Beinn a Bheithir to the south.

It's these little problems that keep me going; it stops me thinking about my tired legs and lack of a decent engine. It was my old geography teacher, an inspirational man, John Earp, who encouraged my interest in geomorphology. I still have and treasure one of his textbooks he gave to me, published in 1959, from his time at Durham: 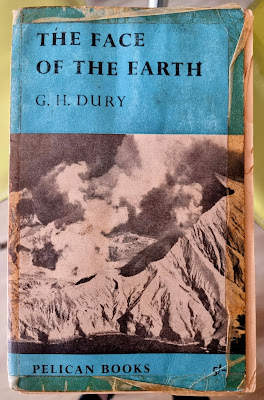 In the next picture you'll see that I'm standing slightly above the surrounding ground. I was following the moraines that you can see on the map as it's drier and easier underfoot than following the stream which has awkward bluffs to negotiate.

Lundavra sits in a gorgeous spot and guards its privacy, so don't disturb the residents as they used to be quite prickly about Challengers passing through their ground. I've never experienced it myself, as I'm a smiley chap when walking through this beautiful spot. It's hard to be rough with someone who smiles.
There's no charge for this sage advice handed down by a generally grumpy bloke.

The public road starts immediately after Lundavra and takes you to the junction with the West Highland Way. The wind was still very strong and very cold, and at this point, sheltering under the small canopy of a West Highland Way information board that I made my mind up that I would change my route. Phil had me following the WHW towards Fort William for five klicks and then cutting across and down to the forestry track that heads up Glen Nevis, to eventually camp across from Steall. This was a fair old schlep, and committed me to the entire distance, as I couldn't see a viable place to stop if I was feeling knackered beforehand.

So I decided to follow the WHW in the opposite direction - towards Kinlochleven. To give myself a similar distance to that planned for the next day, I could finish at the south end of Loch Eilde Mor and cut up along Loch Eilde Mor the next day to rejoin the route at Meanach Bothy. However, if I wanted to finish before then there were a few options open to me with good camping and water. This route also had the advantage of slightly less ascent and descent. Given my condition it seemed like a no-brainer.
For the next couple of hours I was walking against the masses all doing the WH Way. They were fortunate in that they had the wind at their backs whereas I was - for the third day in a row - walking into the teeth of a very cold quite strong wind, with the occasional rain shower thrown in for luck.
I had a good rest at the transmitter above Kinlochleven as there was a bench. I also had a phone signal, so I phoned Challenge Control for the first time and caught Sue moving Control from Newtonmore to the Park Hotel. The weather was now cheering up a little - no rain but still a very blustery wind.

I called it a day around five, when I reached the sad remains of the once wonderful Mamore Lodge Hotel, perched directly above Kinlochleven. The pegs went in readily, which was as well, as it was quite an exposed spot. I've fond memories of the hotel, once meeting Mick Daniels and Diane Woofenden and having a few too many drinks with them (I blame Phil) before continuing on up to Loch Eilde Mor to camp quite late. Another time, on a PreWalkDaunder after the Foot & Mouth Outbreak, there was a shoe dip that Phil stepped into, not realising that it was a couple of feet deep and watching his leg disappear into a bath of chemicals. Well, I laughed.
There had been talk of the old place being refurbished, but then the pandemic came along and scuppered them. I do hope it can be saved. 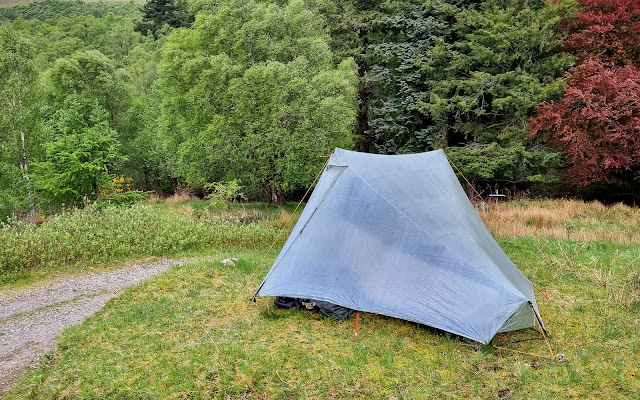 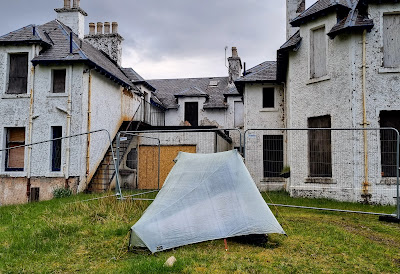 Being within eyeshot of the transmitter my phone had a 4G signal and so I managed to waste a considerable part of the evening on FaceBook, sharing pictures to the TGO Challenge FaceBook group. There's one particular share that I'll reproduce here. My phone records how many steps I make each day. The last 30 days were illuminating as there were precious few steps each day from 15th April to the 12th May, and then a stratospheric change for the first three days of the walk.

The next shot shows the steps taken today, together with an estimated distance walked which seems to be surprisingly accurate. Each column represents half an hour's walking, so you can see clearly when I took rests.

I was fast asleep reasonably early. The last I remember was the wind getting up with a few stiff showers, which sound like gravel being hurled against a Cuben fibre flysheet. Natalie Notch was given a good shake but happily she didn't flinch in the slightest. She's a keeper.

Here's a blast from the past. It's still a favourite of mine.

Plucked from the ether by Alan Sloman on Saturday, June 11, 2022