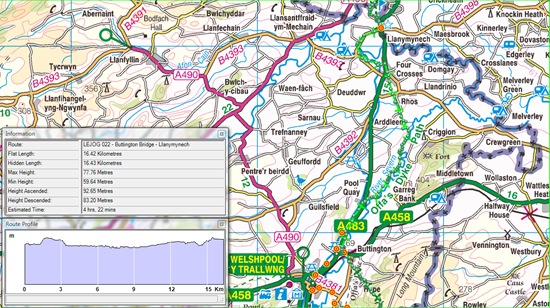 After the lunchtime pub - a lovely saunter along the looping canal, passing swans nesting on the towpath and passing over an aqueduct, strange in that the canal has a dead end and so no one will be passing over it; a lovely piece of British eccentricity. The sky to the north of me start building to an electric intensity, and the air freshens after the muggy morning as I enter Llanymynech - a tidy little place with school, Post Office and three pubs that I have seen so far.

It starts to rain as I force my rucksack through the narrow front door: Perfect timing after a comfortable day.

That completes the Montgomery plain and the Severn Valley. The guidebook suggests that these past two days might not have been the high spots of Offa's Dyke, but I disagree. The walking has been pastoral and canal walking, when not strewn with rubbish left by towny idiots, is idyllic.

It may be early in the walk to try to understand why some places seem to be so ghastly and why others are so delightful, but my theory so far rests with the sense of scale in a community.

It seems that when you are in a village, ie a small community, everybody knows you and the community forges links with the youngsters to ensure they have enough to do and are valued. It would seem that when you live in a town, you do not have the chance to be known by all, and so older children tend to group together, as they at least form a cohesive group. This would seem to dislocate them from the community at large, and so the trouble starts.

However, with cities, there is so much available that these children are almost spoilt for choice, so the place has a safer feel to it as they are usefully occupied.

So, what is the answer - "When I were young" there were school trips, clubs, scouts, choirs etc: There was never enough time to do it all!

Nowadays, youth groups have dwindled as youth leaders and teachers have ever more paperwork, risk assessments and the like to wade through before any child gets a sniff of adventure and involvement.

Until we dump this bureaucratic crap and just take kids out to do risky stuff and actually succeed at something they never thought they were capable of and learn some self respect, then it can only get worse.

Our risk averse, blame culture is feeding a society that is becoming increasingly divisive towards children. Someone out there, and I don't mean politicians, should stand up and be prepared to denounce the nanny culture with authority, before it gets any worse.

Plucked from the ether by Alan Sloman on Wednesday, March 28, 2007

Email ThisBlogThis!Share to TwitterShare to FacebookShare to Pinterest
Labels: MY 2007 LEJOG, OFFA'S DYKE