I have been following a number of great outdoor blogs over the past four years and thought I would share with you some of the finest posts. These have given me so much happiness that I really feel they ought to be shared.

The first is from over the pond; from Mark Alvarez. Mark is  a TGO Challenger and writes effortlessly and with great style. You can find a great post by clicking HERE

For the lazier amongst you, I have cut and pasted the post below: Enjoy! 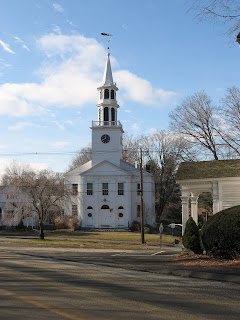 Our town clock is in the steeple of the First Congregational Church—for good historical reasons a common situation in small New England towns. When I was in my teens my grandfather, then in his 70s, had the job of winding it, and I often helped him. (The job carried a small honorarium, forever undisclosed to my grandmother.) Getting up to the tiny belfry space that housed the mechanism entails climbing successive flights of increasingly rickety stairs, after first reaching for the secreted key in its hiding place and flicking on a sequence of dim lights.


The weights for the mechanism are two big wooden boxes filled with field stone, and our job was to raise them to the top of their runs. The “clock” box is the smaller of the two, and the cranking was easy—one-handed, really. The “bell” box is gigantic, and the cranking there, usually something over a hundred turns, was a much more substantial job, definitely two-handed, and you really had to get your back into it. (My grandfather demonstrates below, though for lack of space he is facing the wrong way and is posing over the easy “clock” gear, not the bigger “bell” gear in front of him.) At 17, I’d always try to do it without resting, something that seemed insane when I became the clock-winder myself. Then I’d do 30, rest, do 30, rest, then try to find someone else to finish. 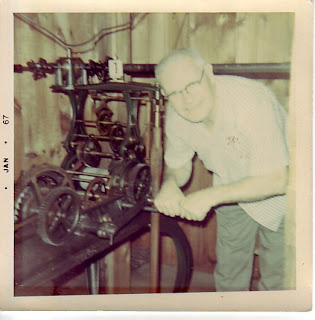 I’d been out of the belfry for many years when I showed up at a Selectman’s meeting one evening in the ’80s, grumping that the clock was almost 10 minutes slow and that my grandfather had never let that happen. The response from my colleagues was inevitable, and I became the town clock-winder for something over a decade. My rule was to keep the clock to within 30 seconds of dead accurate, which I usually managed by setting it 30 seconds fast and letting it slow down a minute over the days between visits. The polls close here at 8 pm on election day, and it always pleased me that the election moderator used the bell in the steeple as the official time.


The system had its quirks. In the spring, I could simply advance the hands an hour for Daylight Savings Time, but the adjusting wheel wouldn't turn a full hour backward, so in the fall I had to stop the pendulum, go away for an hour, and return to give it a push to begin Standard Time. A greater inconvenience was that, because there wasn’t enough run for the clock weights, I couldn’t simply appear on the same day every week. Instead, I had to climb the belfry a day sooner than I had the week before. I say “I”, but like my grandfather, I often had company, usually in the form of my father or my young daughter, but sometimes simply a curious friend or neighbor who just wanted to see how things worked. On the wall of the belfry space, many of the winders have left their autographs and dates. I remember watching my grandfather inscribe his, and seeing my daughter do the same three decades later.

I knew some of the earlier winders, and was told about others by old residents. My favorite story is about the man responsible for the clock in the first part of the last century. He was a stickler for accuracy, and because he knew the telegraph company always kept strict time, he assumed that the little Woodbury Telephone Company, housed in a little building a few hundred yards south of the church, did too. So before he’d go to wind the clock, he’d call the operator and ask her the time. She would excuse herself, return, and give him his answer, satisfying him that the clock was running accurately. One day he asked her why she had to leave her console to check the time. “Why,” she told him, “I go out onto Main Street so I can see the Town Clock.”


I retired as town clock-winder at the end of 1999, after helping to promote a painstaking (and expensive) refurbishing of the external clock faces and the 1876 clock mechanism itself. I was replaced by an electric motor, which winds but doesn’t adjust. The clock is often 10 minutes slow.

Plucked from the ether by Alan Sloman on Wednesday, March 03, 2010