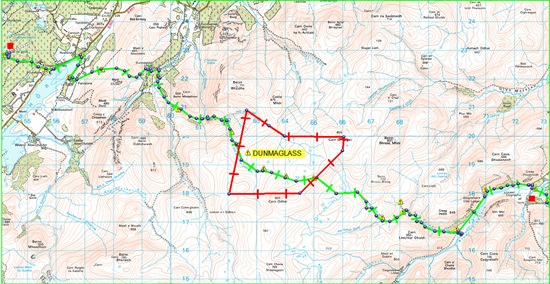 After a great breakfast with the Sutherlands we loaded the coffin into the back of a van and trundled it down to Errogie, to lean against the chapel wall so that the gathering hordes (surely one or two would show up?) would see it and wait there until everyone arrived. I was then loaded back into the van to be taken back to Ault-na-goire to collect my pack and walk down with it to Errogie.
Encouragingly there were phone calls from the Beeb and the Germans & French TV people and very soon we had quite a gathering around the coffin! In all I would estimate that about thirty five people turned up – a great number considering the day chosen was during the working week.
We had decided the night before to row the coffin across the lake in great style and so the box was strapped onto the rowing boat. Alex was magnificent in his long black funereal coat and played a lament on the violin before we clambered aboard. 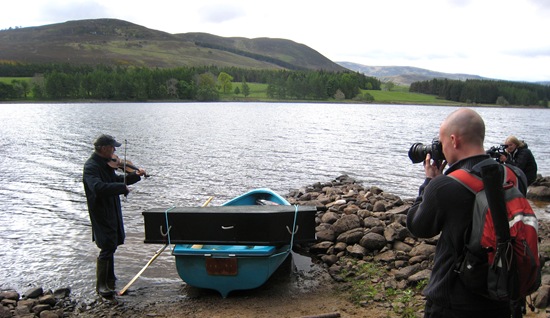 One chap with quite a few expensive looking cameras slung round his neck asked if he could be a passenger in the boat. I asked his which paper he was from and he answered simply “The Times”. Which “Times” was that? I enquired, thinking it might be something like the Outer Hebridean Times or some such publication.
Just THE Times he answered simply…. Of course he could come aboard! So that’s how we managed to get James Glossop of The Times to help row the coffin across Loch Mhor. He explained that he had never rowed before but the feisty lady rower said “You’ll soon get the hang of it” And he did too… 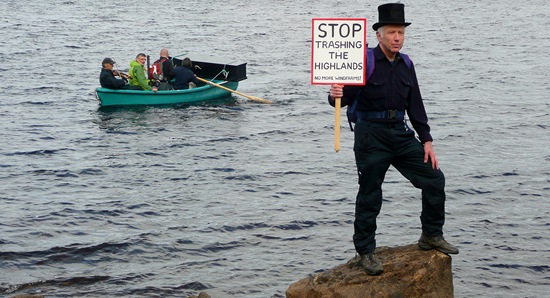 The rest of the party walked around the loch as we slowly pirouetted mid loch a few times, before all meeting up again on the south shore and setting off for Dunmaglass.

We all took it in turns to carry the coffin over to Dunmaglass Lodge, over rough heathery ground. At rest stops I was interviewed by the TV people and the coffin carrying party did frequent re-takes as the film crews wanted the perfect shots. Everyone was in great spirits and the weather was really magnificent. 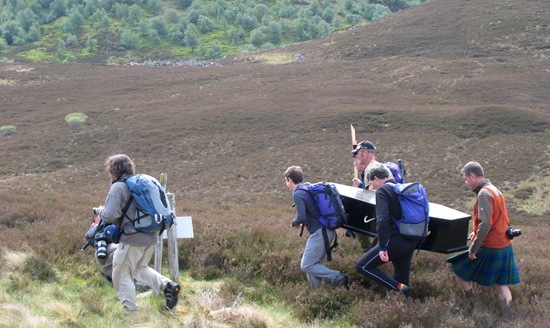 There were signs, provided by the estate, guiding us around Dunmaglass Lodge to ensure we kept to the path. There were also signs erected by Dunmaglass Estate, especially for us, headed “Wake for the Wild” which asked us to be careful not to disturb nesting birds and to “avoid damage to the ground.”
How crass was that? They are going to bulldoze 20km of new roads up into the fragile peat uplands, bury thousands of tons of concrete, erect huge pylons and 400 feet high turbines that will smash those nesting birds into little pieces!
When we reached the Lodge itself we were met by two women police officers and their police car, ensuring that the route to the Lodge was blocked. 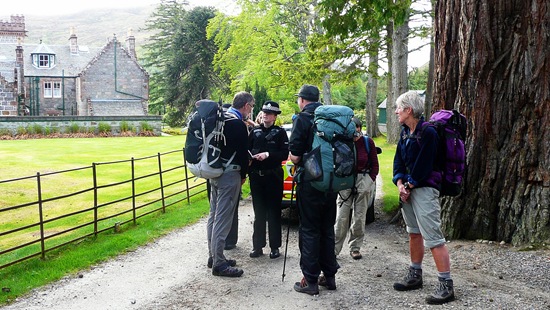 Never having ever organised a demo before (the last one I attended was about thirty years ago at Molesworth) I was not sure what to expect here.
I was certainly surprised that even though they appeared to know who I was and what we were doing they *insisted* on taking my name, address, place of birth and telephone number and then proceed to warn me that we were not to litter the countryside with the coffin. It’s interesting that Sir Jack Hayward, sitting on his beach in the Cayman Islands, thousands of miles away, can still rustle up a little help from the bobbies to protect his house from a marauding mob. I wonder who paid for their presence that day? As Sir Jack would know from his days with Wolverhampton Wanderers, football clubs have to pay towards police attending their games. I am sure the two officers could have been more gainfully employed in Inverness that day. 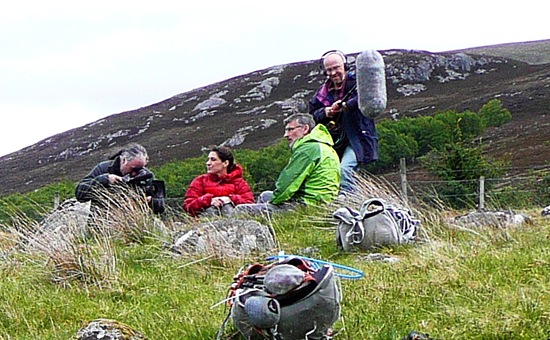 We had lunch just across from the Lodge where we did another interview to the television cameras and then David Albon very kindly said a few words over the coffin to camera for the BBC and ARD/ARTE to send us on our way for the second leg.
At this point the press and TV people left us to get their material off to the studios or whatever they had to do with it and so the rest of the party hitched themselves to the coffin and we headed off once more; this time up to the site of the turbines – quite a slog up the hill.
All around us the hillside was magnificent – wild moorland with a tugging cold breeze running through the heavy heather in waves. Curlew & grouse calls were abundant and the splashing burns as pure as could be. Clouds scudding across the high moorland, the dark peat scars like furrowed brows. Amongst the heather, precious, tiny flowers, mosses and all the little crawly beasties at the bottom of the food chain that rises so magnificently to the golden eagles that often fly above here. 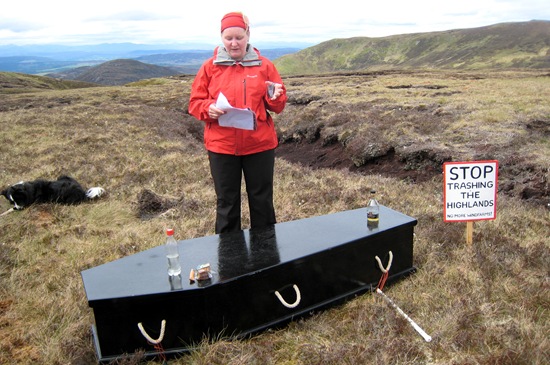 We eventually made the top, where Janet Donnelly said these powerful words which I have transcribed in full:
We have come here today because we are the lucky ones. We are lucky because we are the last generation who remember and who have had a chance to be inspired by the Scottish landscape and everything it represents.
Take a moment now to look around you – really take in what you can see because this may be the last time that you will be able to experience that extraordinary feeling that comes when we feel ourselves dwarfed by the magnificence and splendour of the unspoilt wild land around us.
As more and more swathes of the Scottish wilderness are pillaged in the name of sustainability, we mourn their loss as if they were dearly loved friends who taught us valuable lessons in life like the fact that there is more to life than 9 to 5, the daily grind and keeping up with the Jones’s. Up here we permit ourselves to escape just for a little while and allow the splendid isolation to lift our spirits as the realisation dawns that we are indeed just a tiny speck on this incredible planet.
This land is in our hands, in trust for our children and our children’s children and if the politicians and the fat cats have their way, they will look back on our stewardship of the land and hang their heads in shame.
The politicians would have us believe that there is no other way and nobody denies that something must be done to reduce reliance on fossil fuels and nuclear power but we contend that the destruction of the Scottish landscape for ever is not the answer.
The technology is flawed, the sums don’t add up and the claims of large scale onshore wind power station supporters just don’t stand up to scrutiny. Add to that the news that we – the taxpayer have paid nearly a million pounds to the turbine owners to switch them off at times of peak output and we have the makings of a first class farce.
It isn’t funny though – nobody is laughing - unless you count those on their way to the bank. Let’s call a halt to the desecration of our wild landscape and the knee jerk reaction that says ‘do something – anything and we’ll think about the consequences later.
John Muir said: “Keep close to Nature's heart... and break clear away, once in awhile, and climb a mountain or spend a week in the woods. Wash your spirit clean”
I invite you all to look around you now and try to work out where you will go to wash your spirit clean when all of this is gone.
Could you all please raise your glasses – hip flasks – mess tins, whatever you’ve brought with you?
A toast:
To the wilderness – may it continue to inspire us, arouse passion in us and provide sustenance for our souls. May those who seek to destroy it hear the voices of those for whom it is an integral part of life and may it long be regarded as an asset rather than a resource.
The Wilderness.
There were few dry eyes at the end of this wonderful eulogy and the whisky tasted all the sweeter.
Chris Townsend and the rest of our wonderful supporters, then shouldered the coffin once more and took the coffin down the hill for the next group to use on the next protest.
Thanks to James’ wonderful iPhone, (my own phone’s battery had conked out after all the calls to co-ordinate the wake) I managed to be interviewed by The Times reporter right at the top of the Monadhliath so that they now had the words and the pictures. Thanks, James. We made it into the paper the very next morning.
I then walked on, up over the top of the Monadhliath, to stand alone and take in, for perhaps the last time ever, one of Scotland’s wild places, knowing that in a few months time, all this would be gone for generations. It was with a heavy tread that I made it down to the Findhorn to camp with Andy, John & Norma & the rest of the Challenge crew. It was a day I will never forget.
Plucked from the ether by Alan Sloman on Tuesday, May 31, 2011