I’ve been over at Mick & Gayle’s place, looking at the statistics of first timers on the TGO Challenge. Here’s Gayle’s graph, lifted from her post: 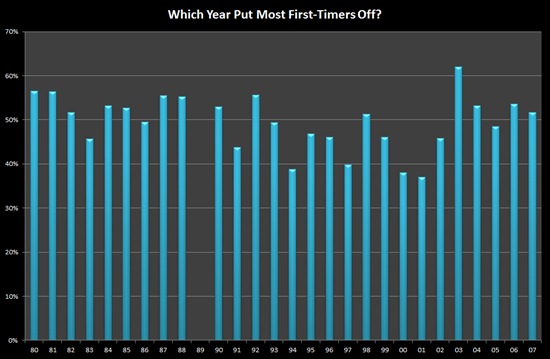 Gayle has noticed that a very large percentage (62%) of the first timers in 2003 never came back for a second go at the Challenge; the highest figure in the 33 year history of the event.  I had a look at my pictures from that year (squirreled away on a previously lost part of my hard drive) to see if I could find out why.

Having had a look at the pictures, the memories all came flooding back: I put it down to the pretty dreadful weather in the first three days, heavy rain and wind. This was followed by some pretty nasty stuff a few days later as well. Fortunately the fourth and fifth days weren’t too bad, offering respite before the second onslaught.

Surprisingly few dropped out on the walk that year. However, if you were a first timer, this must have seemed like a pretty daft way of spending your two weeks of valuable holiday; Freezing cold and soaked through. It must have put off those that didn’t come back for a second go.

I walked that year with my son, Oli (who was an incredibly fit 22 year old at the time) and Mick Coady and his partner, Sandra. After all these year, Mick’s immortal words of encouragement to a Sandra left far behind still ring in my ears! “Come on, Sandra!” It can’t have done too much harm to their relationship, as they were married shortly afterwards. (Phew!)

So here are the pictures, in the form of a slideshow. Just click on “View slide show” for a peek.

Plucked from the ether by Alan Sloman on Monday, January 07, 2013