Today was going to be a big day in our TGO calendar; the evening stop was to be the first of our cheese & wine parties. There was just one problem – we had drunk nearly all the wine at Meanach bothy in the blizzard. We were also a little light in the cheese department – we had scoffed the lot.

Fortunately we had had the foresight to arrange to meet up with the excellent Veteran ‘Cheese & Winer’ Alistair Pooler. Alistair had been unlucky in the draw for places for the Challenge – missing out by a hair’s breadth – but he was still determined to join the party and was having a week up in the Highlands bagging Munros. His plan was to knock off a couple in the morning, head off down to the shops for supplies and then join us for the party.

So he generously agreed to do the shopping for us. Then there was the decision on the venue. As you will have seen from yesterday’s pictures the mountains were slathered in snow and our fine weather location for the party was to be the tiny lochan below the top of Creag Meagaidh. We had decided that this would be way above the snow line and so decided on our Foul Weather Alternative of Luib Chonnal bothy.This also had the advantage of scooping up unexpected Challengers who might be staying at the bothy. You can see both routes on the map below. (You can click on the map to make it slightly bigger in a new window.) 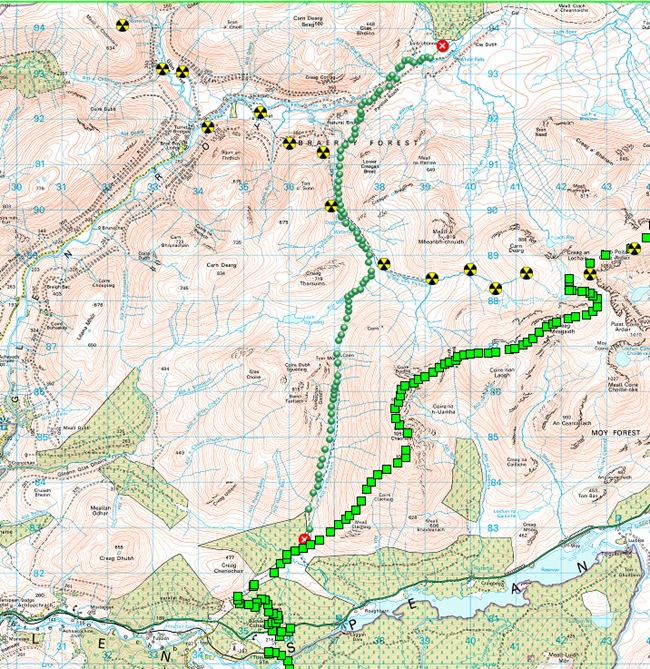 We set off from the bunkhouse with a rare luxury – a packed lunch – with cartons of juice, real fruit, beautiful soft filled rolls, crisps and chocolate. Of course,the novelty of real food during the day meant this didn’t last long and it was gone by elevenses. A boy needs to keep his strength up! And it was as well we did, as the walk up the burn to Tom Mor was one hell of a boggy trudge. There are no views to speak of, apart from those behind, and the ground is very hard work.

If you look at the map, you’ll notice that we missed crossing the burn and so missed the track on the other side… Oh well, it was character forming.

[HEADING UP TO TOM MOR, HAVING REGAINED THE TRACK – CLICK TO ENLARGE]

However, after a rough morning, the afternoon was bloody wonderful! Tom Mor, the top of the pass, is a wonderfully boggy spot set amongst magnificent scenery and a place to linger and revel in the colossal size of Scotland’s empty places. I really adore bogs like this – unpicking the way through is marvellous fun and it’s relatively easy going as you are no longer struggling uphill. Unfortunately there was a really sharp cold wind, which meant that we decided on continuing over the top for a bit of shelter before stopping for a proper lunch. 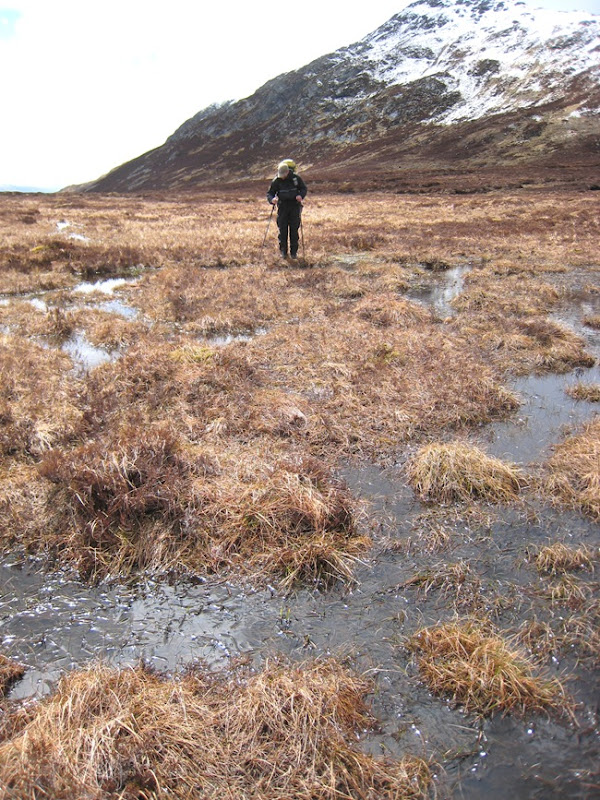 The next picture is the view from our lunch stop, looking up at where he had planned to camp had there been a lot less snow. We are obviously enjoying ourselves, as the boys are smiling. Either that or it’s wind. 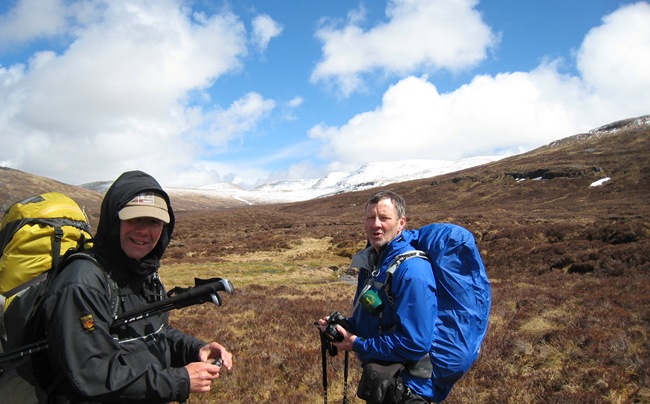 [LOOKING TO CREAG MEAGAIDH & THE WINDOW – CLICK TO ENLARGE]

Phil has a camera with a zoom lens that allows you to count Candice & Cheryl-Anne’s freckles at half a mile. Here’s his picture, looking up to our proposed camp spot next to the Window. It was really cold and windy where were had had lunch, so it would have been interesting up there. 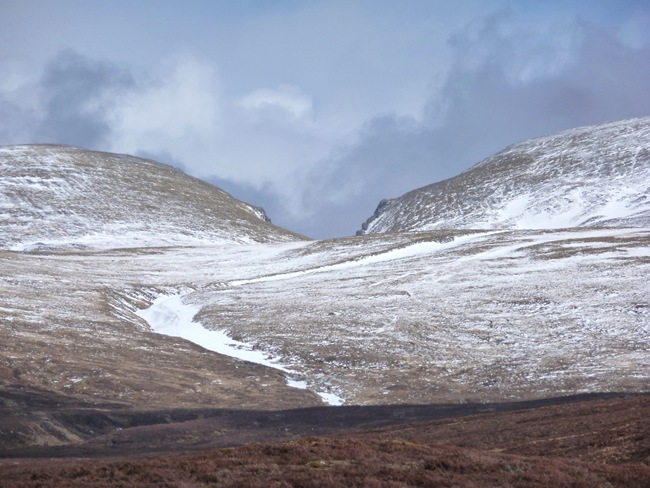 It was then a delightful amble following the burns down to the Dog Falls, crossing the streams early as they were all running quite full and fast. 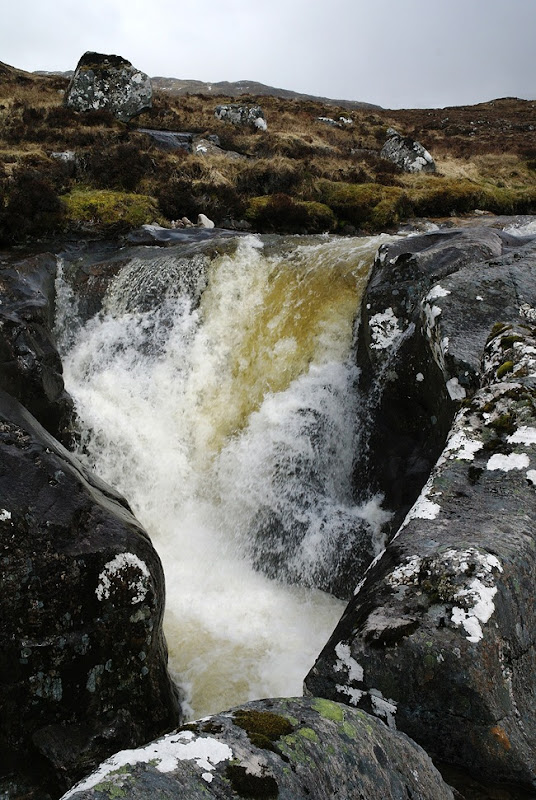 The Dog Falls are impressive – a chain of big drops  set amongst huge wild country. Andy spent quite some time videoing the Falls and so we took our time, enjoying this fabulous afternoon. 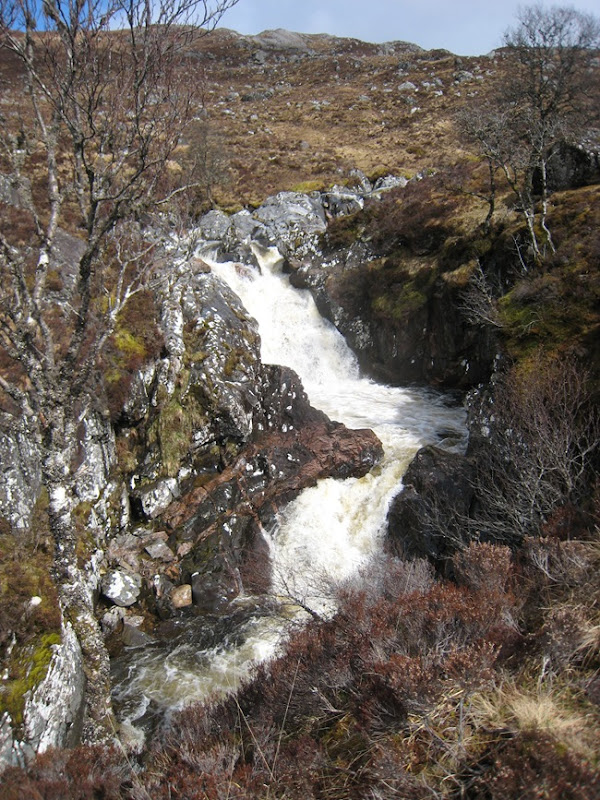 We were making our way down to Glen Roy, but rather than take the path to Annat, we decided to cut off the corner and head pathless more directly to the bridge just before the bothy. In hindsight, this may have been a mistake, as the ground was very very hard going – rough heather and bog; Very sapping. Phil’s excellent work with the map meant we avoided the steep little gorge lower down that can trap the unwary, and we cut across a gorgeous section of moorland that would make a wonderful wildcamp.

The Parallel Roads sang out from this vantage point. 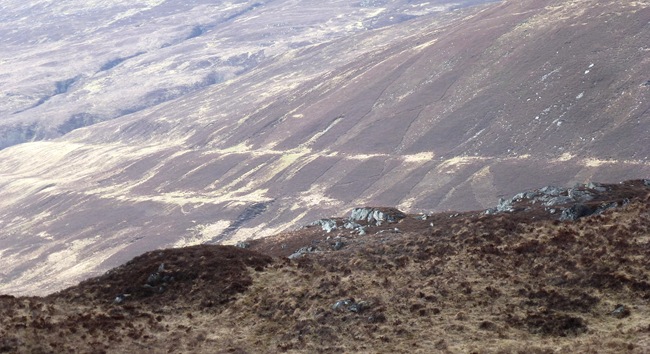 [PHIL'S PIC OF THE PARALLEL ROADS – CLICK TO ENLARGE] 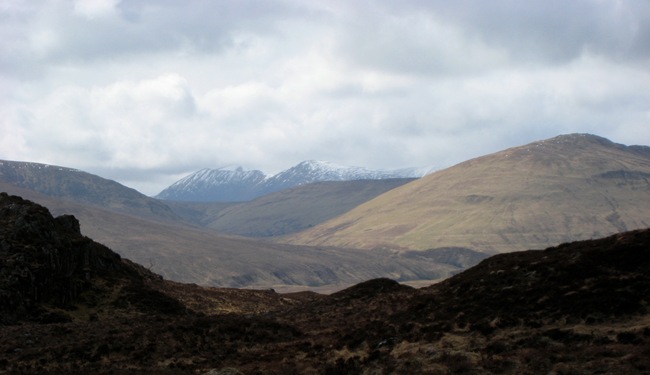 There were a few boggy bits to negotiate, so I’ve included one of Andy’s excellent bog pictures. It shows that this area was once covered in trees – the ancient roots are perfectly preserved in the peat. 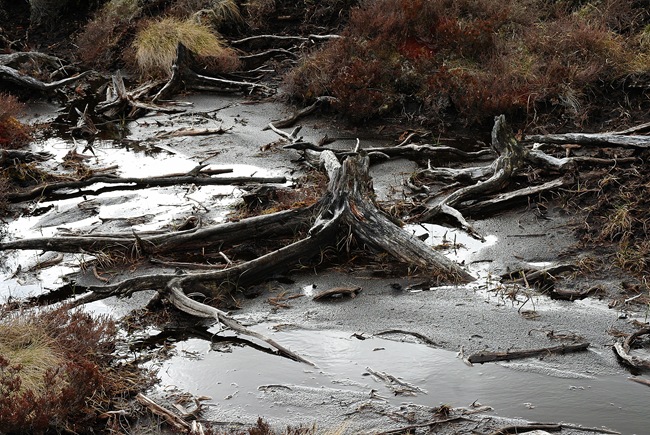 We’re still smiling in the next picture, which must have taken a bit of effort, as we had just completed the difficult boggy section after the Dog Falls. Perhaps it was relief that the day was almost over? 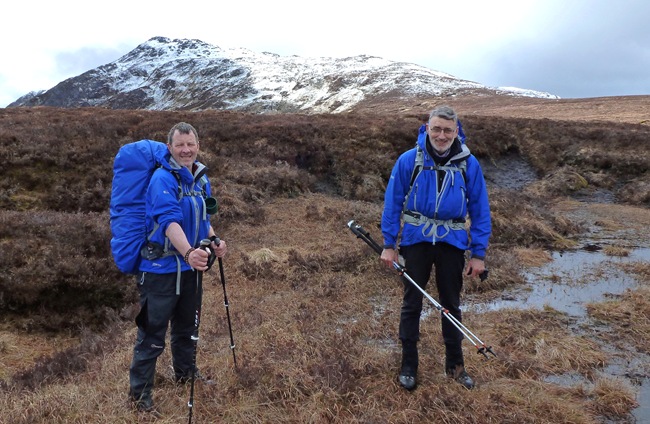 As is the norm, I arrived at the bothy completely shagged. Okay, it wasn’t as bad as last year, as I had been on EPO for a year and the blood count was a bit higher this time around. But I still need a little time at the end of each day to get somewhere back to normal.

Already in residence Andrew, another Challenger, had been there a little while. He was a proper rufty-tufty walker with his sights set on the hills tomorrow and he was busying himself with Naismith to see if it was possible. A lovely bloke.

Phil did his magic with the bothy stove and was pleased to see that the stove damper rock that he had provided at our last visit a few years back was still in place. There was a massive stockpile of fence posts downstairs and before long the others had sawn and split enough for the night and Phil had the stove singing. I managed to avoid all the manual labour, but truth be told I was still a bit shattered. We were warm, comfortable, fed and happy. Socks were drying on a line above the stove. Just as the last of the whisky was being drained, Alistair clambered up the stairs with a gargantuan rucksack.

From it he produced kindling, logs, (kindly supplied by Ali & Sue from Newtonmore Hostel) firelighters, newspaper, four or five bottles of wine, a bottle of port, half a dozen cheeses, and water biscuits! We are in awe of the man!

And just as we were well into things, up popped Richard who had had a big day, on the hills when the weather allowed and down again when it was poor. He was another soul on a difficult route, but he looked cheerful enough and joined in merrily. The six of us polished off all of Alistair’s provisions. Alistair said Mike Knipe was parked up a few miles down the track but as he had had a massive day he wasn’t going any further. 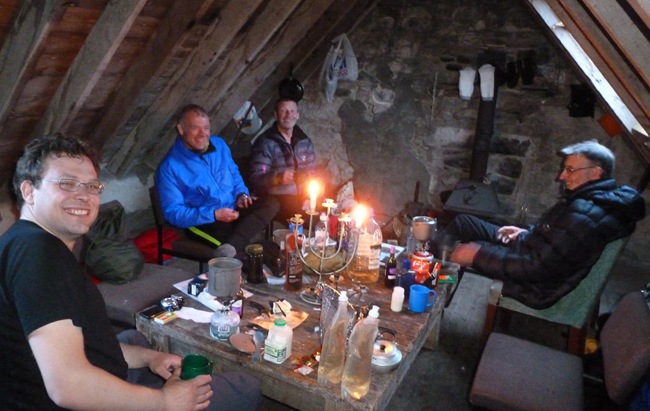 There was a lot of shuffling about down the other end of the bothy during the night, but the girls had gone by the morning.