Now I don’t usually bang on about gear on this place, but today I’m making an exception. When you have bought a particularly SHITE piece of gear, thinking it was going to be the Dog’s Bollocks, it is particularly distressing.

The kidneys help regulate your body temperature, and for quite a few years now, my knackered pair had me constantly feeling the cold. So, when I saw that TGO was offering a heavier TGO Challenge branded fleece this year from one of the most respected gear manufacturer’s on God’s Good Earth, Rab, in a colour-way that makes you weak at the knees – a refreshing deep black – I dusted down the cheque book and parted with my own money! (This is a rare phenomenon these days.)

It took a while to arrive, so I wasn’t able to take it on the PreWalkDaunder to check it out. I tried it on the once before packing it away in the rucksack, delighted with the purchase.

I will warn you now. NEVER, EVER buy this pile of ordure! Here it is in all its glory: 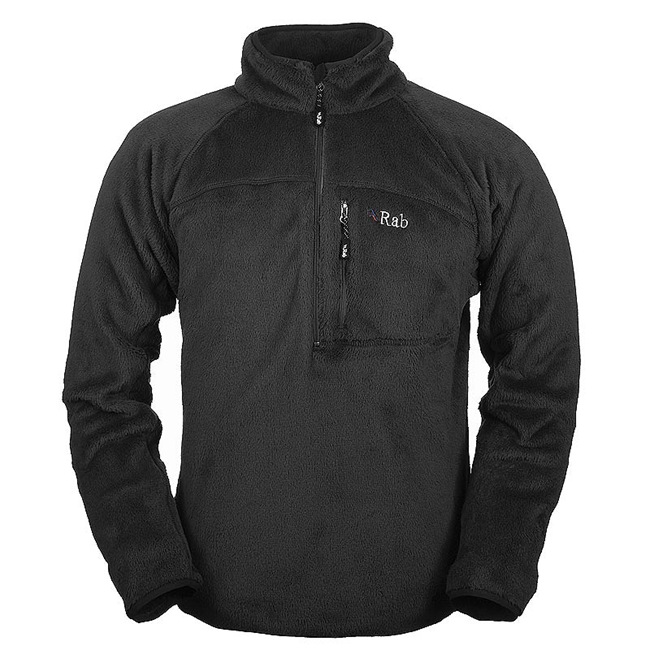 Here is a link to Rab’s website: Rab Boulder Pull on Fleece

It is quite obvious to me that no-one at Rab, at the prototype stage of this fleece, had ever taken it out backpacking, because if they had it would never have made it to manufacture.

Both inside and out the fleece has a thick pile that slopes downwards, a bit like the thatch does in a thatched roof. This sounds, on the face of it, to be an excellent idea, as light rain showers are shrugged off and the water runs down the outside of the fleece. So far so good.

Now I want you for a moment to imagine that you are sitting in your living room on a cold winter’s day, with the fire burning nicely in the hearth. In front of the fire is you trusty Labrador,  sitting on the fireside rug, which is sitting on your lovely Wilton carpet.

All house-husbands who do the hoovering will know about this. In fact I cannot imagine there is anyone on this planet who doesn’t know this: Every time you hoover, you notice that the rug has “walked” sideways by a few inches. And you have to struggle and tug the thing to reposition it centrally back in front of the hearth.

It’s because the pile of the Wilton has a slant to it. Every time your pooch gets up, shuffles around and lies back down, this tilting pile slowly shuffles the rug which is sitting on it a tiny fraction sideways. Over time this builds up to quite a few inches.

With the Rab Boulder Pull-on Fleece, this process happens at an alarming rate. The bottom of the fleece which sits on your hips, after a morning backpacking, will be up around your nipples. The bottom of the sleeves will be up round your elbows. You will feel you are being strangled by the bloody thing, while your tummy and forearms are freezing their nadgers off!

I cannot remember how many times I bored the bollox off my two compatriots with this dreadful tale of woe. I am sure they can tell you though…

So just in case you didn’t get the message, here it is again:

NEVER, EVER BUY THE RAB BOULDER PULL-ON. IT IS A COMPLETE PILE OF SHITE!

And now, relax. And let’s continue with the day!

We’d all walked today’s route on previous Challenges, but we were still looking forward to it, as it is a little honey. One of the main reasons it’s a little beauty is that it is 26km heading EAST, instead of North. Hallelujah! It’s mostly on good paths and minor roads, passing alongside the very top of the Spey Valley, from it’s source at Loch Spey. There are some boggy bits around Shesgnan, but they just add to the fun. 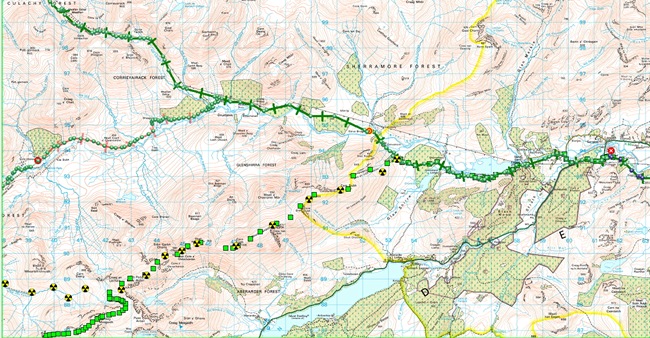 [TODAY’S ROUTE: BETWEEN THE RED WAYPOINTS – CLICK TO ENLARGE]

The other Andrew had set off early for his tramp up to the Window and along the tops. We didn’t envy his inevitable slow sloppy plod back up the way we had come down yesterday afternoon through all the never ending bog.

We left the bothy in the care of Alistair and Rich Flint and set off over the Allt Chonnal which was nice and gentle. It can be a bit of a problem in spate. Luib Chonnal is set magnificently in big country with wonderful views. 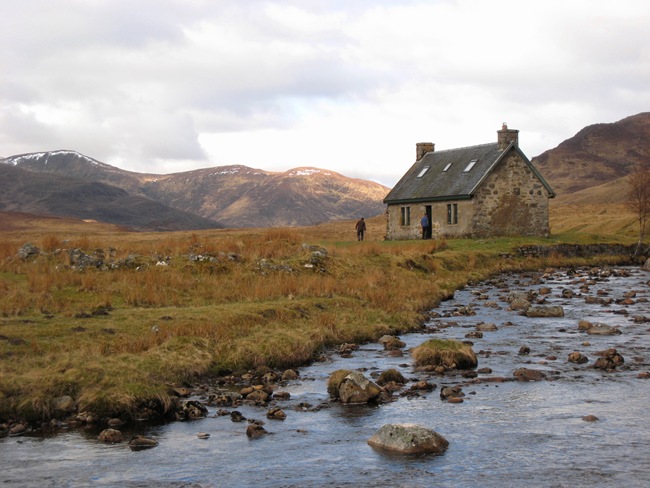 And the next picture is looking back to the bothy. The weather was wonderful: Bright, sharp, clear air with a blustery wind and hefty showers  that would splatter against your coat and then fly away. It was perfect walking weather. 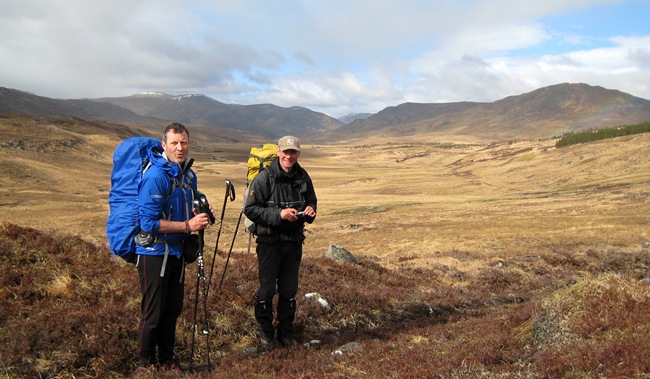 Shesgnan is a lovely little private bothy that has had a pile of money spent on it – it has a generator out the back and is in very good order. The track from Melgarve has also been improved for better 4x4 access, which helps speed progress. 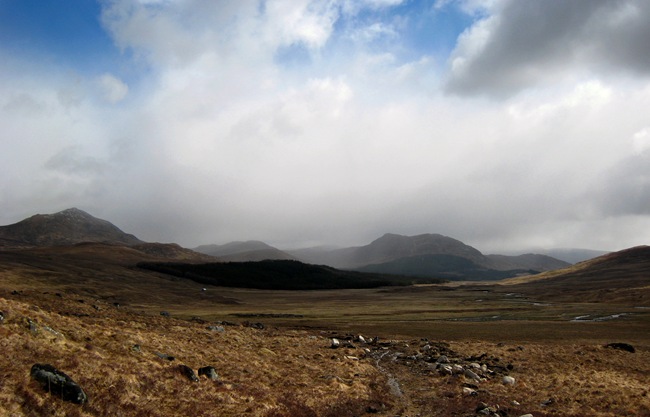 Shesgnan is the little bright dot in the middle distance in the photo above. Another perfectly set little place.

We strolled on to Melgarve bothy, not quite making it in time before a really hefty, walloping shower had a go at soaking us. So we called an early cooked lunch and sat in the comfy chairs while the rain battered the window. In the back room we turned up another of Stormin’s laminated maps; We seemed to be following an almost identical route.

One shocking aspect to the day was seeing the horrendous road that has been built alongside the pylons down the Spey valley. It is a monstrous scar on the hillside with HUGE trucks running along it. Having got home I see that Bidwells are now pressing for this road to be kept after the pylon run has been built, in order to facilitate future wind farm construction and forestry projects. You can read about it HERE.

At Garva Bridge we met another great character, who was rangering and had a nice little fire going in a stove at the back of his 4x4. He shared a nip with us all and all was well with our worlds.

We all piled into the Monarch Hotel (used to be the Monadhliath) and met the new Australian owners. They have spent quite a bit of money upgrading the hotel and it is all very pleasant, but it has lost a little of the Highland charm that these out-of-the-way hotels seem to have. That said, this couple are hard nosed and are looking for a definite clientele, and we were not quite sure that we were their target market! However, they looked after us handsomely and I look forward to going back. The food was excellent and the beds very comfortable.

After dumping our gear in our rooms we were back at the bar in nano-seconds and to our surprise we were handed an envelope addressed to Andy Phil & me. Inside was a very handsome drinking voucher and a very nice note from Humphrey that explained that this was in lieu of his company at tomorrow’s cheese & wine party!

We spent absolutely no time at all in spending the very generous voucher (I would add that we went some way over the voucher – I wonder if Humph could be persuaded to send another for the difference?) Then, Lordy lordy! We were handed a parcel, again from Humph. We opened it gingerly, to find two quite gorgeous vacuum-packed artisan cheeses that Humph had sourced locally – a goat and a cow. That just left the wine to sort out then!

We spent the evening in the bar with John & Mike Knipe. Mike had chased us down the road and arrived only moments after us. We might have had one too many beers and we whiled away the evening talking about strangling fleeces. He had suffered the same misfortune with his purchase. We both agreed that we were missing the belligerent drunken Scousers. We have rotten throwing arms.

Plucked from the ether by Alan Sloman on Thursday, June 13, 2013