In December 2010 I started writing about the threat of wind farms to the magnificent Monadhliath Mountains – specifically about the Dunmaglass Wind Farm that had just gained planning permission.

By March 2011, the situation in the Monadhliath looked like this: Farr had already been built, Kyllachy, Dunmaglass, Corriegarth and Allt Duine were now firmly on the horizon. 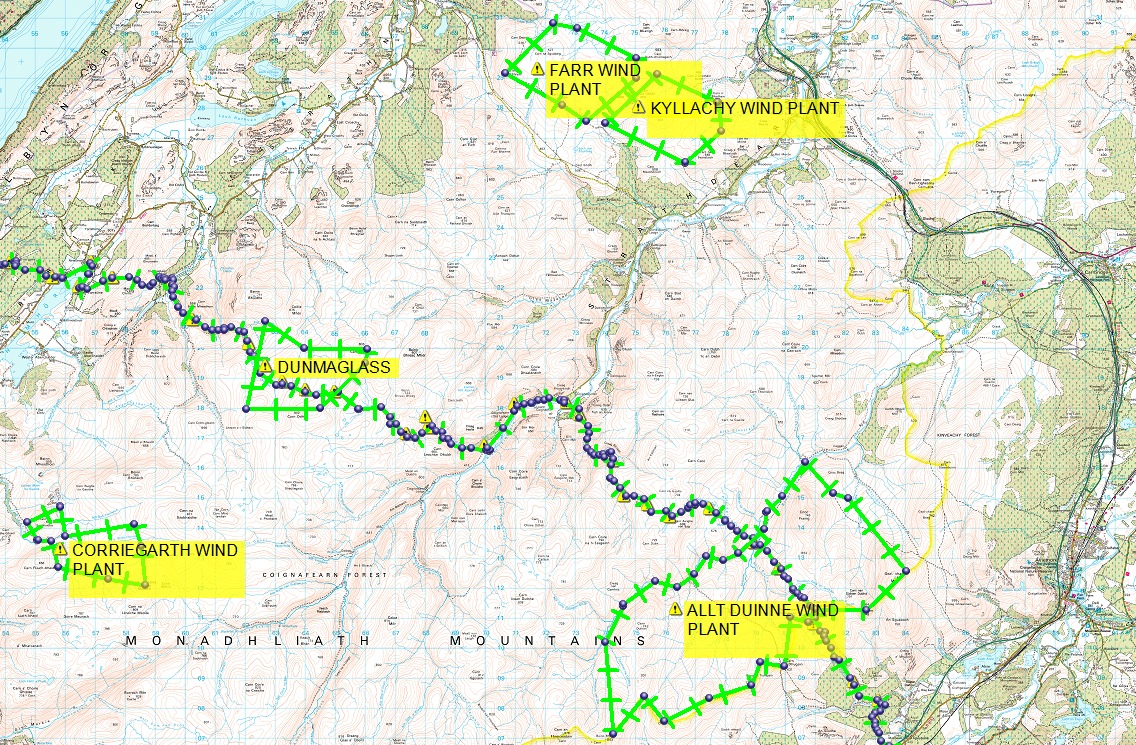 A few months later, in June 2011, the situation had worsened with Druim Ba, the Balmacaan and Stronelairg added to the siege: 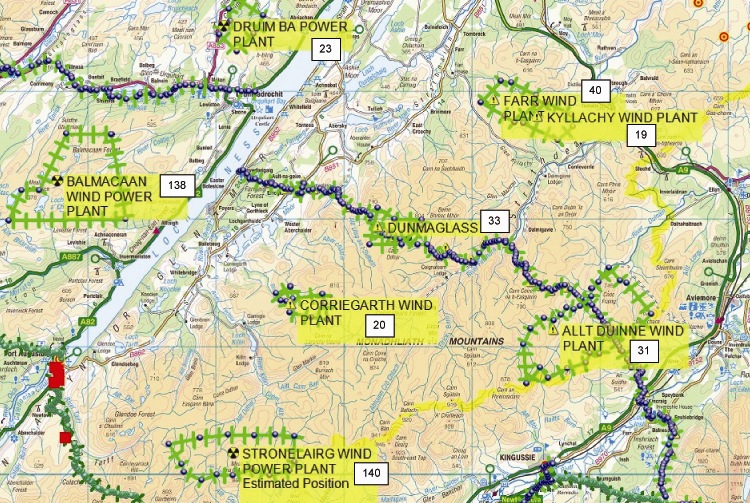 Well, the wind industry doesn’t muck about and they now want to scorch more earth in the Monadhliath by adding in the Dell Wind Farm right next to the Stronelairg Wind Farm and Corriemoney next to the Balmacaan Plant. 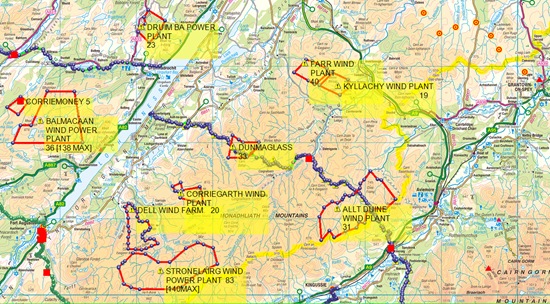 You may have noticed that they have apparently reduced the size of the developments at Balmacaan and Stronelairg from 138 and 140 down to 36 and 83 turbines.

Well actually they haven’t at all. They are just taking them a bite at a time. Let me explain. Let’s have a look at Scottish & Southern Energy’s (SSE) Scoping document for the Balmacaan. It looked like this: 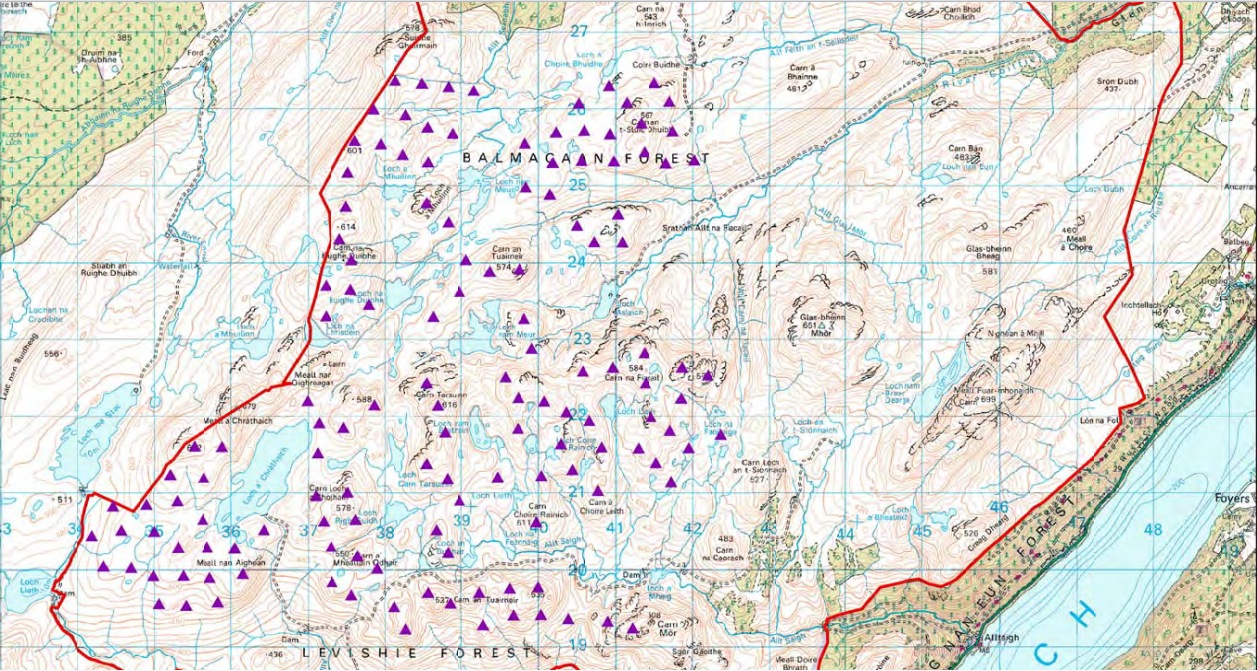 Have a good look at this map. You’ll notice that the red boundary extends a lot further east towards Loch Ness than the turbines (each purple triangle is a 125m tall turbine) They show 138 turbines on this scoping map. But obviously there is room for about another hundred or so in the empty space. So, why did they not add them in? Well there’s the small matter of the Loch Ness Pumped Storage scheme, which looks like this: 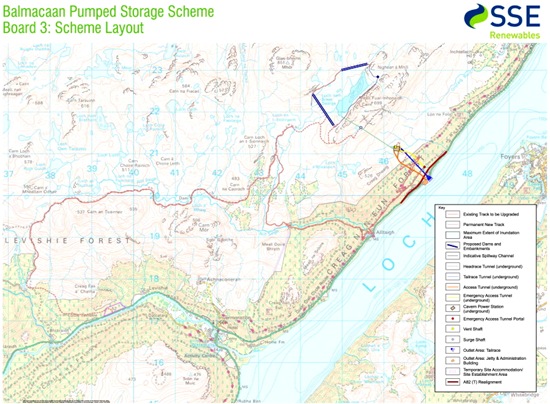 Building a pumped storage scheme takes a huge amount of time – there’s the tunnel to dig, the haul road and the gravity dam to build, plus the turbine hall. The there’s the new pylon run to build, to link up to the Beauly-Denny line currently being constructed.

It’s far easier to build the eastwards extension of the Balmacaan Wind Farm after the pumped storage scheme is built. It then becomes a no brainer, as can be seen from the application for the Stronelairg Wind Farm the other side of Loch Ness in the Monadhliath, which will utilise the haul roads and pylons from the Glendoe Hydro project which has just been completed. After all, the mountains have already been trashed, so what’s a few more turbines?

However, even SSE hasn’t the balls or the money to flash out on a 138 turbine wind farm along with all the other wind farms, hydro schemes and new pylon runs it has on the go at the moment and so they have decided to take it a bite at a time.

For planning purposes they have renamed the first chunk as the Bhlairaidh Wind Farm. It’s for 36 turbines, each 135m high (Have you also noticed how all the turbines are getting taller with each application? Last year they were 125m tall) It looks like this: 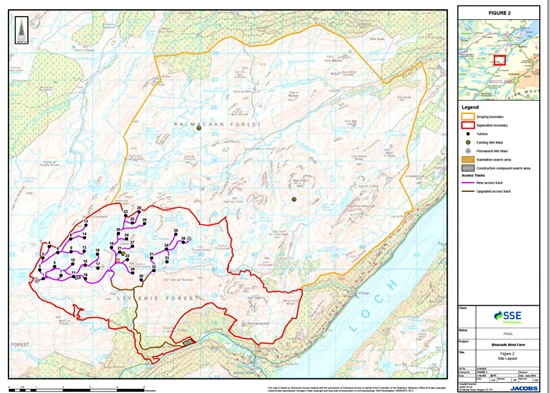 So, as you can see they intend to take the first bite out of the Balmacaan, in the SW corner. You can see the outline of the eventual wind farm; It’s the orange boundary line. You’ll note the Met masts in the empty portions of the Balmacaan. They’re the first sign of a wind farm. The Met mast has just been approved over the other side of Loch Ness for the Dell Wind Farm – I received a letter confirming that a few days ago from Highland Council.

So – what about Stronelairg? This was the original scoping proposal for 140 turbines: 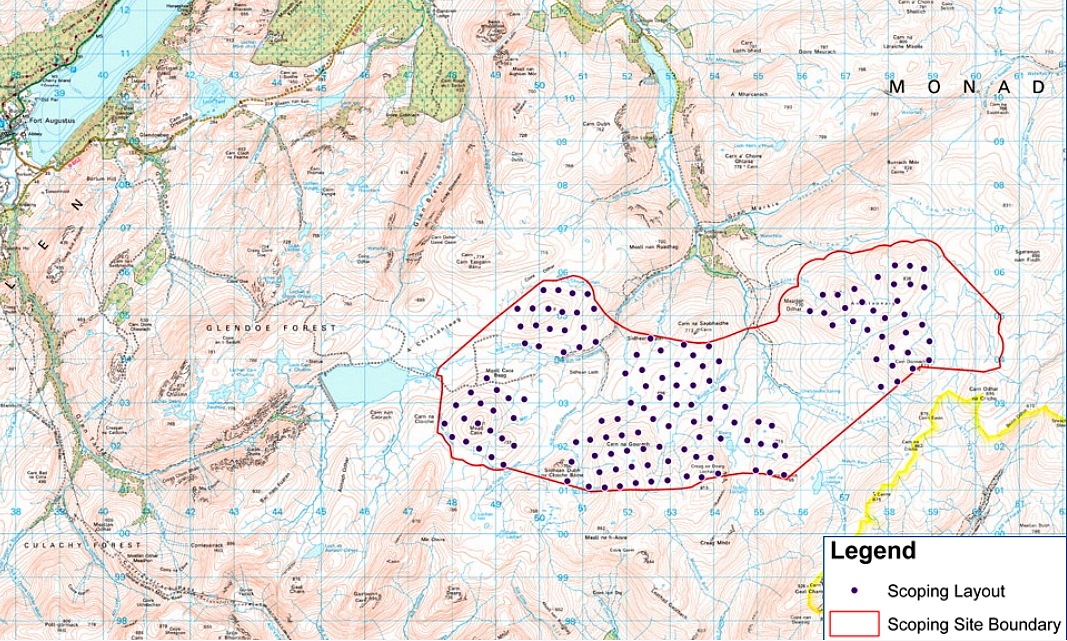 You’ll see that it’s bang next to the new Glendoe Hydropower reservoir.

So, what are SSE are proposing for the “scaled back” Stronelairg scheme? It looks like this: 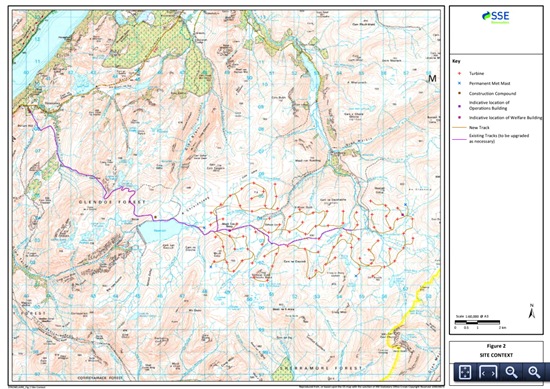 It’s not rocket science to see which turbines are missing from the original scoping report, is it? All they will need to do is just infill the missing turbines when they want to build the next fifty. Of course, there could not possibly be any objection as they are just plugging the gaps; Hardly any new haul roads, pylons or substations will need to be built.

SSE are cunning bastards, when you think about it…

So, what are we to do about this?

The Mountaineering Council of Scotland has, as always, been incredibly busy on our behalf. They have been looking at every wind farm application in the Scottish mountains and they object, if they think it is appropriate to do so. Here’s the letters they’ve written on our behalf for the new Dell Wind Farm and the Bhlairaidh Wind Farm

For the colossal Stronelairg Wind Farm they have got together with the John Muir Trust to fight it together. Here’s the joint Press Statement:

What do we need to do next? I would suggest at the very least we should be writing to the Energy Consent Unit (see the above letters for the address) and Highland Council, (again, the address can be found on the above letters) expressing our alarm and complete rejection of these proposals.

Just to remind everyone of what’s at stake here, I’ve lifted a wonderful picture of the wide open spaces of the Monadhliath Mountains from Andy Howell’s excellent TGO Challenge report: 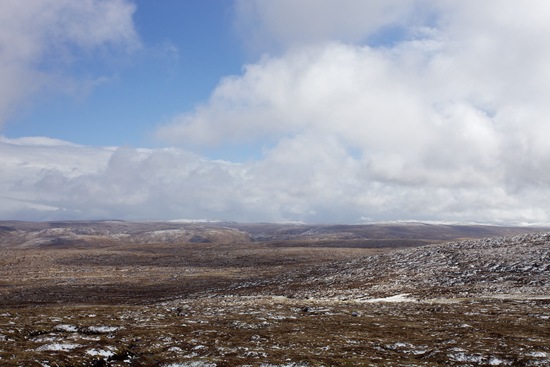 [PLEASE CLICK ON THE PICTURE TO ENLARGE IT TO IT’S TRUE MAGNIFICENCE!]

Time moves on. In the period since I last posted here, gloriously, the wind farm at Druim Ba has been thrown out!

However… There has been a lot of dreadful news as well.

First: Eon have come along and proposed a 36 turbine scheme known as the Moriston wind farm. This is rated at 108MW which means 3MW turbines – so expect to see 135m turbines, at least. This will be strung along the ridge between Ft Augustus and Glen Moriston – facing the “Trees for Life” estate of Dundreggan, so they are sandwiched between Moriston and Bhlaraidh. Who on earth in the planning department let this happen?

Third: At the back end of last year Binneun wind farm has been approved for construction. It’s immediately to the west of the Millennium wind farm and to all intents and purposes this means that that fine rocky ridge will now be strung with 45 massive wind turbines. They will be seen from the Affric hills to the north and as far south as Ben Nevis. They will be visible from the wild lands of Knoydart in the west, and from deep in the Monadh Liath to the east.

Fourth: Beinn Mhor wind farm, to the west of Corriemoney (aptly named, these days) is now being scoped for seven very large turbines.

Fifth: The most recent terrible news is that the first tranche of what used to be known by SSE as the Balmacaan wind farm (now known as Bhlaraidh wind farm) has been approved. These 32 turbines will be 433 feet tall (132m) – That’s very big indeed.

“The Scottish Government wants to see the right developments in the right places, and Scottish planning policy is clear that the design and location of any wind farm should reflect the scale and character of the landscape, as well as being considered environmentally acceptable.”

So, the Scottish Government clearly believes that land with the wild qualities of the Balmacaan are up for grabs. Fergus is a former member of the Lomond Mountain Rescue Team, and has climbed around two thirds of Scotland's Munros. If folk like this believe that industrialising Scottish wild land is a good idea, there's absolutely no hope left of retaining a scrap of it.

As I’ve written above, expect the final numbers for this wind farm to be well in excess of 200 turbines, plus, of course, the Balmacaan Pumped Storage Scheme.

The map (increased in scope to include Binneun, Beinn Mhor & Millennium) now looks like this: 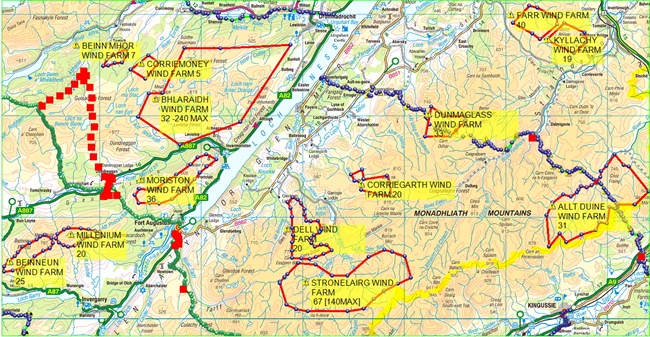 And, below, I’ve shown Highland Council’s own map as of 1st January 2014. of course, Bhlaraidh wind farm should now be shown in purple as it is now approved: 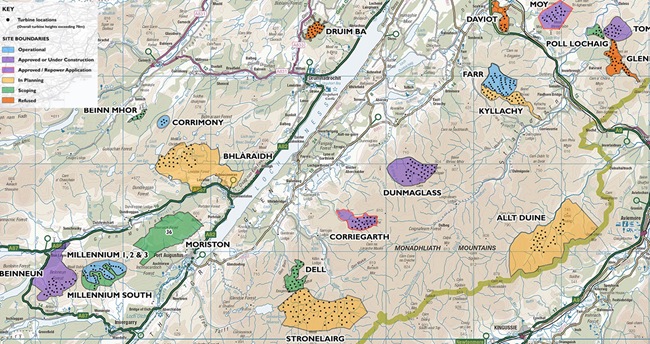 As pretty as this map is, what it doesn’t show, of course, is what is really planned for the Balmacaan – the pumped storage scheme and the 200+ wind turbines to be taken in great lumps later on.

You can find the source map by clicking HERE. You can blow the map in that link up to a massive size and see for yourself the true horror of how the Highlands are to be destroyed by wind farms.

Plucked from the ether by Alan Sloman on Saturday, January 18, 2014