The night before and the team pose for a record photograph, albeit not a very walkery one, of this year’s crop of Daunderers, enjoying a quiet night at the Old Crown, Hesket Newmarket. They are, from right to left (and why not?) Morpeth, Croydon, Phil, Lynsey, Andy (with a face on), David and me. 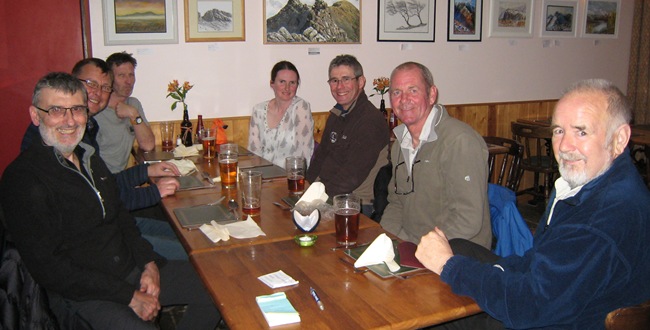 I’m not sure why Croydon is fondling Phil’s leg but Phil seems to be enjoying it. But it could be because Lynsey is holding his hand? Croydon, a versatile chap, is also giving Morpeth a foot massage. Curiously, you’ll note that Phil’s, Andy’s and my glasses are almost empty. A well matched team for the forthcoming TGO Challenge.

Surprisingly, after a blustery night, with sheep giving birth all about us, bang on time the Daunderers transformed themselves into the shabby bunch shown below. At least they now look all walkery. 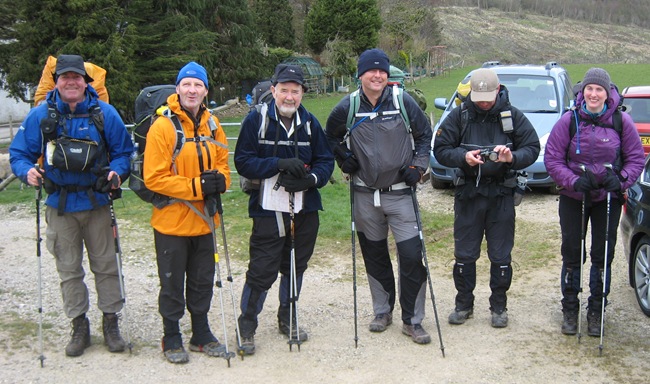 For those interested in such things, you can see the route that we set ourselves below:

We set off up some godforsaken boggy hillside or other for the old explosives hut at 440m (you can zoom in to the map to find it; this is an interactive postmodern blog, you know) where the weather took a turn for the decidedly horrid. It was very cold, extremely windy – with heavier gusts – and with some light rain thrown in for good measure. We had a brief second breakfast and set off once more, with the weather getting even horrider!

Quite wisely, Morpeth was having none of this, and while Croydon was leaping over the Caldbeck Fells chasing after his orange rucksack cover, he decided he really had not recovered from his very nasty chest infection. The lad was struggling and so he very sensibly plodded back down the hill to a warm cafe in Caldbeck before ringing home to give Diane time to kick out her toyboys before his arrival. Happily, he was reunited with his packed lunch that he had left in the fridge. 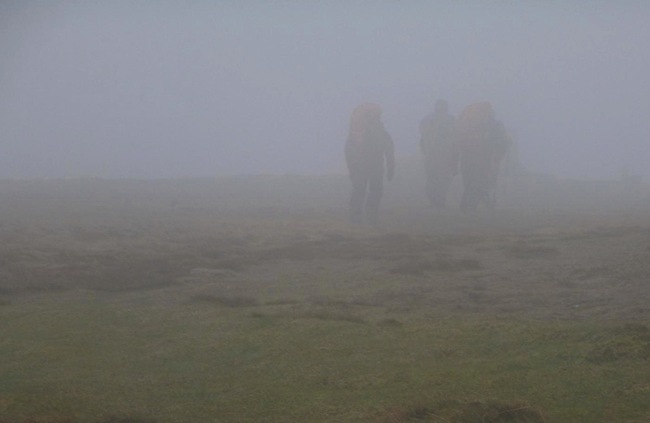 Ordinarily it’s not an onerous walk up to the top of High Pike, but today’s was a bit of an epic. I practiced my Titanic pose, arms akimbo, with rucksack, leaning into the wind at a good thirty degrees to the vertical, before regaining my marbles and diving into the little shelter. It was now much more than horrider; I would venture to suggest it was now bordering on horridest.

We had to kick out (in the nicest possible way) a very friendly group of Cumbria Way walkers, who had passed us on the way up. (I think it was Lynsey’s fiercest stare that did it) to gain sole possession and being as we were, on top of the world, thought it best to celebrate the occasion with lunch. The truth of it was that no-one could really face leaving the shelter and besides it was a good way of reducing pack weight. 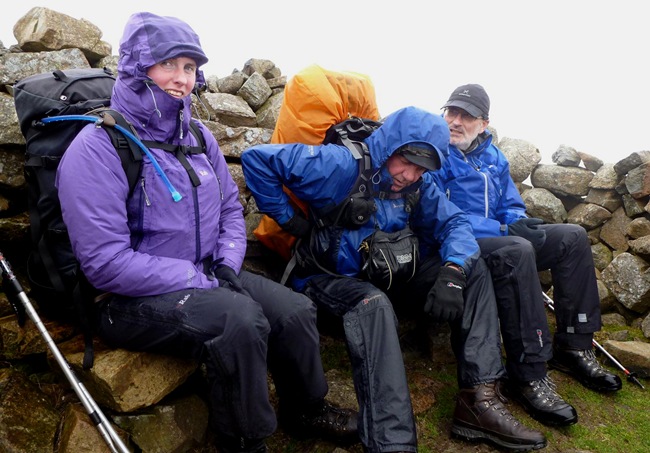 We put it off and put it off but eventually we headed out into the possibly horridest weather for the mile to the Lingy Hut, whereupon we set about evicting those really lovely Cumbria Way walkers again. 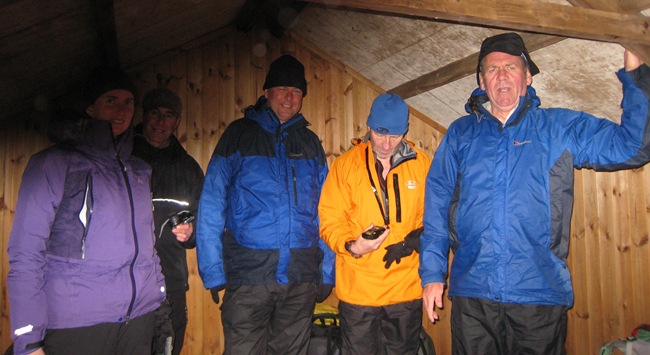 It was nice in there, with the place finally all to ourselves. But there were Daunderers who were keen to get on (I won’t name them, to save their blushes) and they insisted that we get up from our comfy armchairs and get back ‘out there.’ Croydon, the Chair of the Daunder Discipline Committee, will be having a discreet word with them later.

It was whilst I was outside having a pee that I noticed a faint path heading straight down to the bottom. This meant that we would have the wind behind us, rather than being battered from the side until finally turning left down Grainsgill Beck on the Cumbria Way. 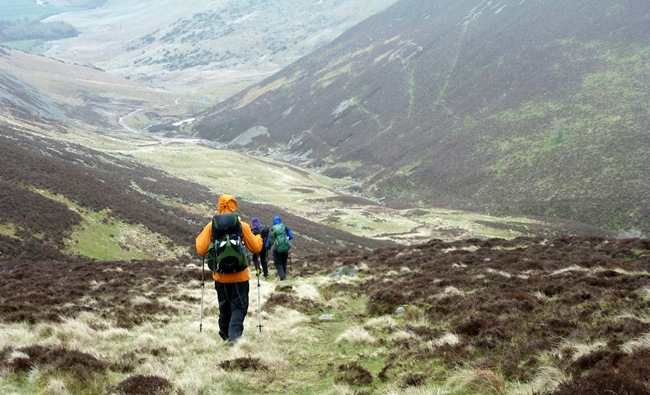 PHIL’S PICTURE: DOWN TO GRAINSGILL BECK – CLICK TO ENLARGE

Of course, this slight shortcut, and with gravity and our heavy packs assisting our descent, meant we were soon evicting the Really Splendid Cumbria Way walkers once again from the information board about the history of the mine. We had puddings here, rounded off with Jelly Babies. The smiles in the photo below can be attributed to the sugar rush. 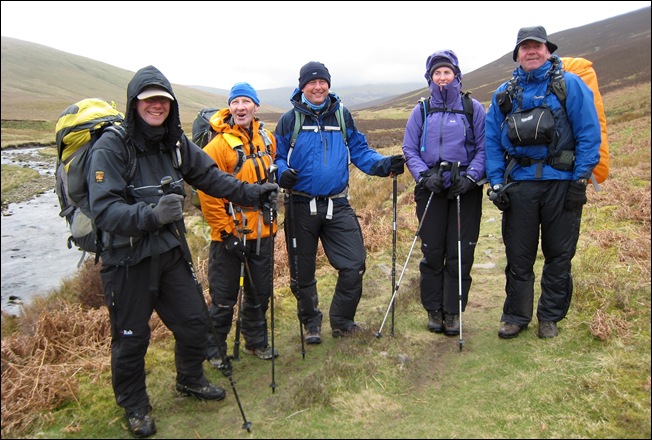 Every Daunder has a schism. This Daunder was to prove no exception. Phil & I decided we would aim for the intended camp spot slightly earlier than planned, to take in a delightful yomp across thigh deep heather, a crossing of the infant Caldew, and then more thigh deep heather to Salehow Beck. This led to utter confusion in the remaining ranks of Daunderers. With Phil and I dumping our packs and filling water bottles for a very deep drink (it was now decidedly humid, and all that heather bashing was thirsty work) we noticed that they were all now heather bashing, and seemingly not enjoying the experience, towards us. It was Phil, I believe who mentioned that they must have believed we were about to put up our shelters. In fact the opposite was true; the intended camp spot was indeed a fiction of tussock and bog and Not Very Good At All for sleeping upon. 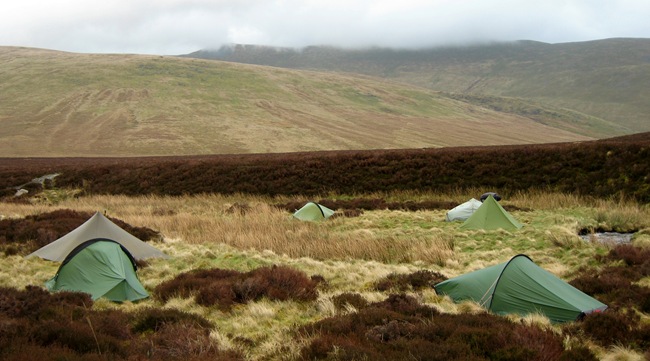 Eventually, David came to the rescue, redeeming his earlier faux pas, and found a spot that he knew about all along and was absolutely sure he had told everyone about earlier. By the time the shelters were pitched and the first flasks passed around and everyone was friends again, it was again very gusty, as you can see from the shape of the shelters in the above picture. 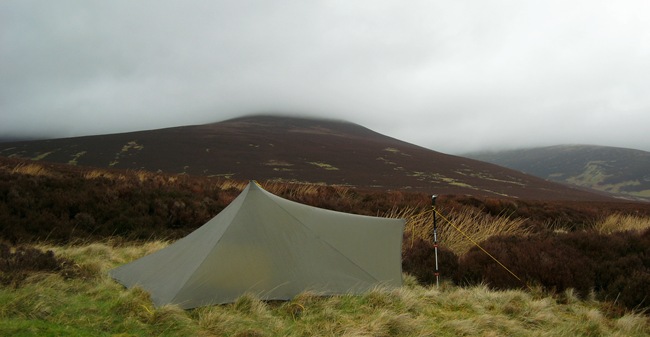 It was 7:55 for 8:00 for cheese & wine at Trinnie’s so I had a little while to take some snaps, before returning to Trinnie for a bit of dusting and hoovering. 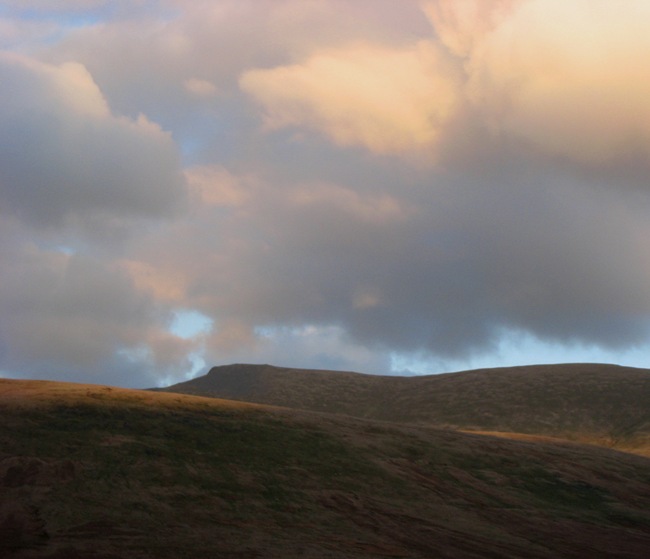 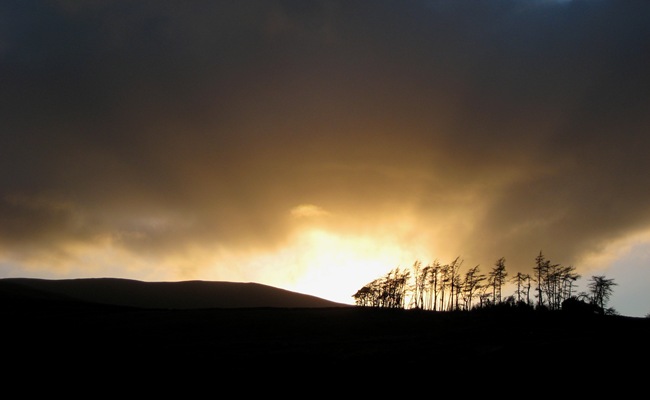 Again, it was a Pooler who saved the cheese and wine party. Andy & I had drunk all the wine, scoffed all the quiche, eaten the Amoretti, licked clean the lamb skewers, leaving just Humphrey’s wonderful, if now slightly ripe cheeses and oatcakes. Lynsey supplied the wine, bless her, and everyone else piled in with flasks of whisky. Humph, (The Lord bless him and keep him!) had met us for a few fleeting seconds at Berwick upon Tweed railway station with Magnificent Mary, to hand over a wonderfully cerise pink carrier bag full of the wonderful comestibles listed above, only days earlier, on our trip home from the Monadh Liath Leg-Stretch. In return, I covered Mary with kisses. 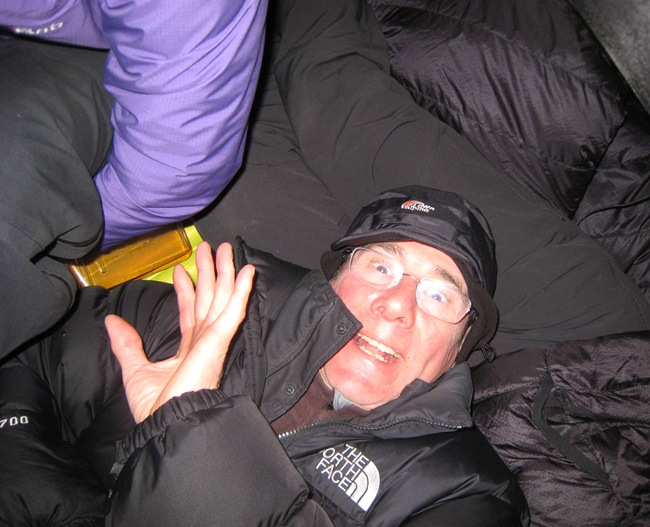 LORD ELPUS, CAUGHT IN FLAGRANTE, THROWING AWAY THE FLASK 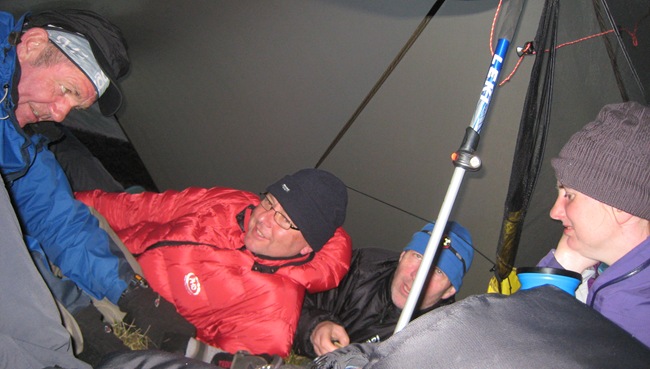 As I drifted off into the bosom of Audrey Hepburn, I recall the outside world getting really very windy indeed with a few handfuls of gravel chucked in for good measure. I slept very well that night, with the Daunder now wonderfully into it’s customary swing.

All was well in my little world.

Plucked from the ether by Alan Sloman on Thursday, April 17, 2014