In March of last year I wrote a piece on the circulation pressures on outdoor magazines. I illustrated the piece with a chart showing the relative decline of the three most popular UK outdoor titles: Country Walking, Trail and TGO. TGO has subsequently reverted back to its original title of The Great Outdoors.

Since I wrote that last piece TGO has revamped its online presence The Great Outdoors and I like it. It’s a much more readable online site these days. I often find myself reading and commenting on some fine articles. Recently they have had pieces on fracking and wind farms – subjects I’ve not seen covered in any other outdoor media. Daniel Nielson seems to have grabbed this by the scruff of its neck and is doing a fine job.

I’ve taken a look at the combined site for Country Walking and Trail – Live for the Outdoors – and I have to say that it’s unimpressive. See what you think yourself for both sites.

Here’s an updated circulation chart; it shows a further decline in print sales for all three magazines. The figures are for second half 2013. (New figures will be out in a couple of months) I don't know how to find out the popularity of the magazines’ online sites, but from the content and reader interaction I would imagine that TGO is doing better then LFTO.

Over the last three years TGO has been very busy with a clever marketing ruse; the TGO Awards. I was nominated for an award in each of the years. I wrote about this HERE and again HERE. In the second of those pieces I was mildly critical of the emphasis put upon product. I wrote

This year there was a new category: Outdoor Blogger, and I was included in that category but wasn’t asked or told that my name had gone forward for voting. If I had been asked I would have politely refused, as I found the voting in the previous two years to be totally bizarre. I didn’t mention it this year on the blog, instead favouring to support a blogger that I felt was a far worthier recipient – James Boulter of Backpackingbongos. I took to twitter and Facebook to support him there, hoping that he would break through the previous years’ bizarre choices. James has written and illustrated his blog wonderfully this year. He made a fabulous trip to Sweden’s Sarek National Park and countless adventures in the UK, in the wild places of England Wales and Scotland. Click on his name to have a look at his fabulous blog. 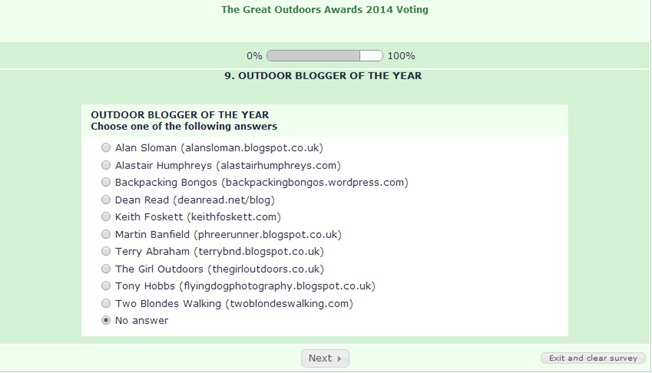 I would have been more than happy to see any of seven of those bloggers (the first seven) win this award. Some are friends of mine, but of the seven James has been head and shoulders the best this year. Tony Hobbs isn’t really an outdoor blogger, He’s more an outdoor film-maker. Two Blondes Walking are based in Dartmoor and are entertaining. I had never come across “The Girl Outdoors,” and I read a lot of outdoor blogs, as you will have noticed from my “blogroll” over on the right.

So Imagine my surprise when I learned last night that The Girl Outdoors had won this category.

Click on the link and take a look. I am absolutely stunned by this result. I have no idea how TGO could possibly think that this blog fits with the profile of their readership. The lady who writes the blog (which is really an advertorial business) is a professional journalist - the online editor of BBC Countryfile.

Another highly respected outdoor blogger put it far better than I ever could in his summing up of her blog: Here are two of his tweets on twitter:

‘I've only just looked at it - beyond belief! Trite and superficial rubbish.’ This was closely followed by:

‘@TGOMagazine: Have been increasingly unhappy about weak content and this outdoor blog nonsense is the last straw. Subscription cancelled.’

In these days of dwindling magazine readership, is it really sensible for a magazine to shoot itself in the foot like this? This result has a nasty knock on effect. It demeans all the other worthy winners of the awards. You can find out who won each category by clicking HERE. My congratulations go to all the other winners and TGO for hosting the event. But there needs to be a serious re-think on who goes forward to be nominated for voting next year.