The TGO Awards: If it looks like a duck… 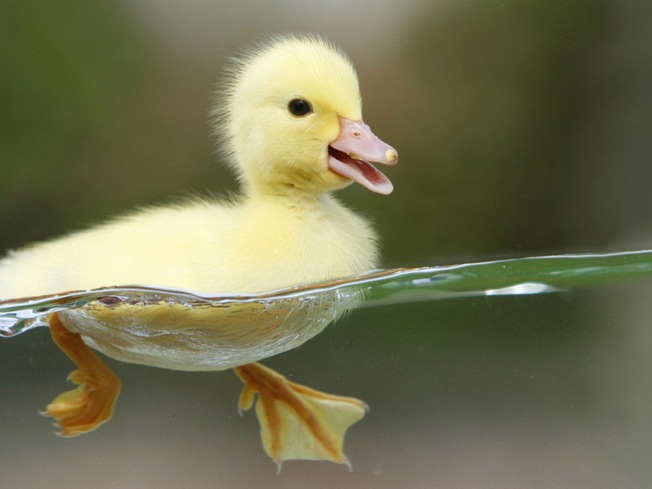 Quoting Wikipedia: The duck test is a humorous term for a form of inductive reasoning. The test implies that a person can identify an unknown subject by observing that subject's habitual characteristics. It is sometimes used to counter abstruse, or even valid, arguments that something is not what it appears to be.

In the previous two posts about this year’s TGO Outdoor Blogger of the Year award there is general consensus amongst those who have posted comments that the average reader of TGO would not see the winning blog as representative of outdoor blogging. Social media – twitter and Facebook – was buzzing. Most were astonished that this blog, so different in style and content to all the other blogs that were nominated for the award, had won. Something wasn’t right.

The following (seemingly valid arguments) are all true:

So why all the fuss?

Let’s go back to the duck:

So I’m totally satisfied that this is not actually an outdoor blog at all, and nor would any loyal reader of The Great Outdoors magazine either. It is a duck. Hence the plethora of comments on my two preceding posts. It must be particularly galling for the other nominees in the ‘outdoor blog of the year’ category to have lost out to a duck.

It must also be worrying for the winners of the other categories as they are seeing their highly prized awards – for indeed they are – tarnished a little by an unseemly spat in the newest category – a category, as TGO said themselves, that had been brought in by popular demand this year.

So what went wrong?

I’m writing this next section as if walking over eggshells.

After the nominations had closed it was pointed out to TGO on twitter that there was not a single woman on the ‘Personality of the Year’ category shortlist: see Mirella’s comment 2nd up from the bottom. 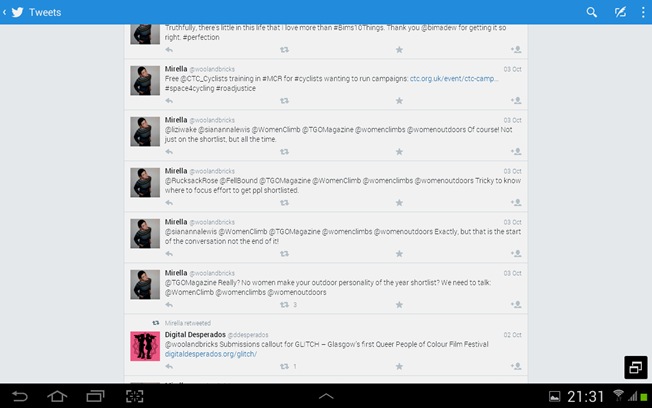 ‘Women Climb’ then stepped in asking for the gender balance of the nominations for the awards: (2nd comment from the top in the next screenshot) 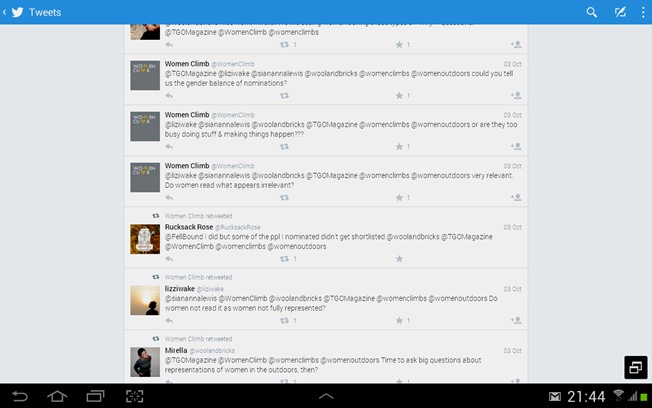 There was obviously genuine concern amongst the largely female contributors to this thread that women were not represented in anything approaching a realistic proportion of the gender balance in the outdoor world. This is patently true. A good example of this is the fact that there were just two blogs out of the ten nominated in the outdoor blogger category that were written by women. But what could TGO have done about this? Nothing, of course, as they were the blogs nominated by the public.

The odd thing is that after this conversation took place on twitter (there were other conversations dealing with this topic as well) one of these blogs (the duck) came top in the voting and the other, ‘Two Blondes Walking’, apparently came second. And, the duck won by a considerable margin.

Now we have already seen that hardly any TGO readers (apart it seems from Martin Banfield – read his comment here) were aware of Sian’s blog. So they didn’t vote for it. Yet the two blogs written by women came top of the poll. What are the odds of that happening? Any statisticians out there?

Explain. Draw graphs. Give reasons. Show your ‘workings out’ in the margin.

When this year’s awards scheme was started, the magazine had its Editor slaving away over a hot keyboard. Sometime later Emily went off on maternity leave, which is a joyous thing. But it did leave Daniel, the Digital Editor, with quite a bit more work to do. Of course he has help but TGO is a small ship and there is still a magazine deadline every month and an increasing digital presence to manage on top of this.

It’s been said elsewhere on the last two blog-posts that it was possible to vote and vote often on this particular poll. Apparently this has been the case for the last three years, and in the past there have been numerous cases of multiple voting, but nothing that materially affected the result of each category.

I’ve been told that this year it was unlikely that voters’ IP Addresses were checked. So: Given all that you have seen here, what do you think has happened?

This is really up to The Great Outdoors magazine. Already we have seen TGO readers cancel their subscriptions. We have seen a great deal of anger and disbelief at the outcome of this particular poll.

I think it’s right that it should be up to the great unwashed to nominate their choice for the public to vote on. It makes sense to keep the numbers to a manageable size so that people are wiling to trawl through the choices available before picking their own winner. However, I do believe that TGO should have the final say on those going forward to the voting stages. Who knows what might be the outcome if a well organised, ambitious blogger (say) manages to garner a fair few folk to get their blog nominated into the top ten? Perhaps that same blogger could go on and muster an active set of the community to support their effort, in order to balance out some perceived imbalance?

Using this system, TGO might be able to avoid the ducks in future.

What do you think? Have your say below. I know you’ll be civil. This place isn’t like twitter.

EDITED TO ADD: if you want a wise and wonderful take on blog awards, take a peek HERE