After walking the entire length of the platform at Kings Cross, I realised my brand new micro-fibre knickers were rapidly sliding downwards to the crotch of my trousers. Only a week earlier I had finally admitted to myself that perhaps I no longer owned the sylph-like 34" waist of the past thirty years and had sadly admitted to a plump 36". And so the order was placed.

We piled out of Phil's war machine at Long Preston and I was sold two pairs of the correct size of  Very Technical Knickers, silver lined and stretchy to hug my new-found petit derriere and various redundant accoutrements by the awfully nice people at Rohan. Whilst this expensive transaction was taking place, Phil, Andy & Mick - aka Lord Elpus, Mad'n'Bad and Croydon -  were taking tea just over the road, served by equally friendly staff.

NB: You can click on any of the photos and they will blow up to a droolingly lustful size. 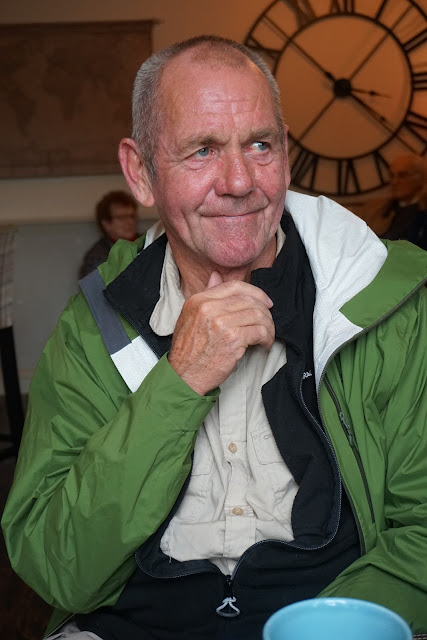 Arriving at Baysbrown campsite in Great Langdale we found that the Advance Party - the VeryVeryNiceMan, the Commander and the Doc - had not pitched our lodgings. Slightly miffed by this lack of thought, we set to and within the matter of a moment soon had a place to stay. 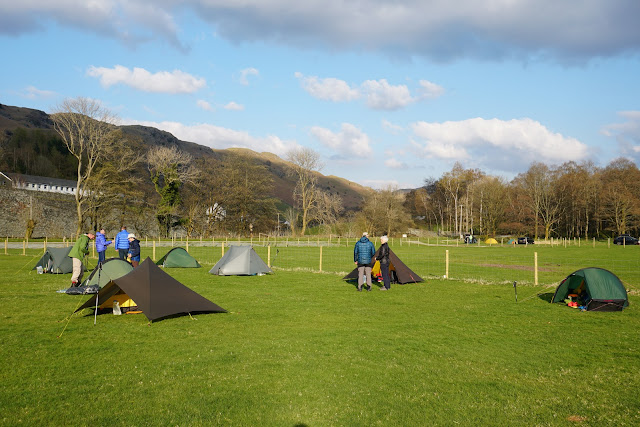 After a deal of scratching around we found two responsible adults to convey us to the Britannia Inn in Elterwater, a favourite watering hole, for dinner.

Trepidation; there's a thing. Since walking in to the Park Hotel in Montrose last May at the end of my TGO Challenge I have not once set out for a walk. No three miles a day. Nothing. Virtually everything in my brand new rucksack is new this year, the old stuff having been totally worn out, and all of the new seemed to be ever so slightly heavier than the replaced kit. 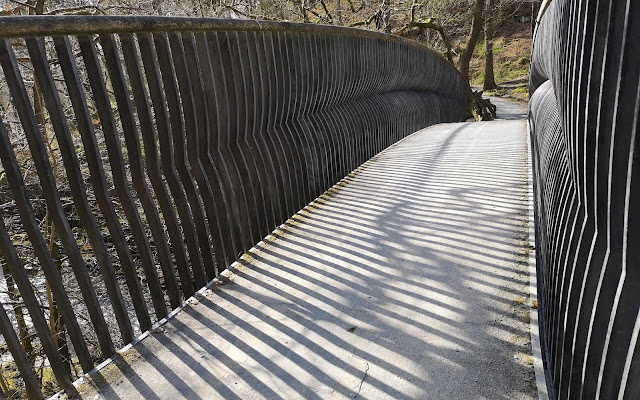 But this was a Decent Daunder and David had put in a nice easy start to Little Langdale. Some stayed at the cafe for lunch whilst others pressed on to find the Three Shires Inn, a couple of pints and sandwiches. It wouldn't be a proper PWD if there were no schisms. 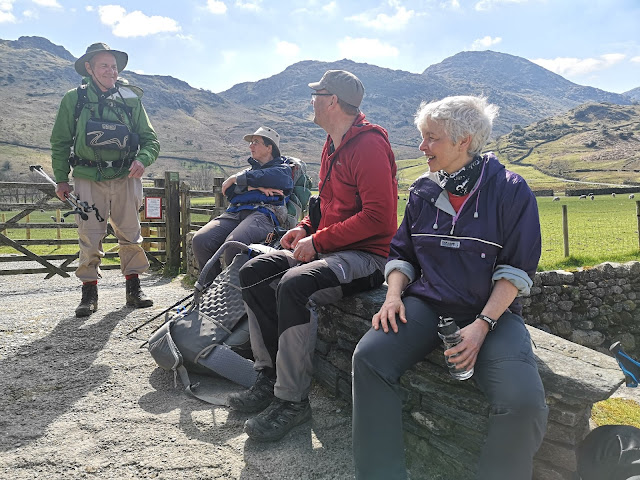 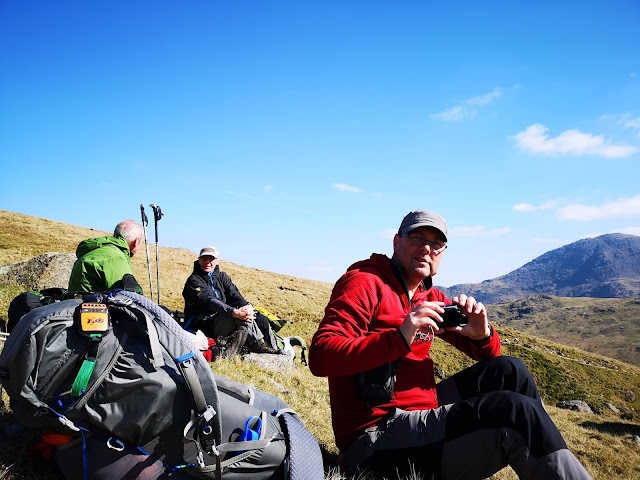 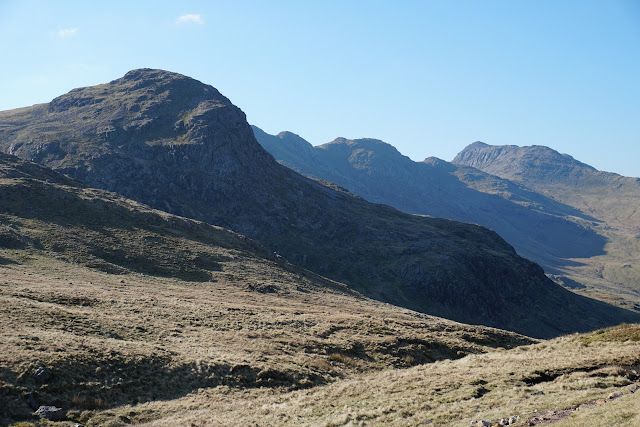 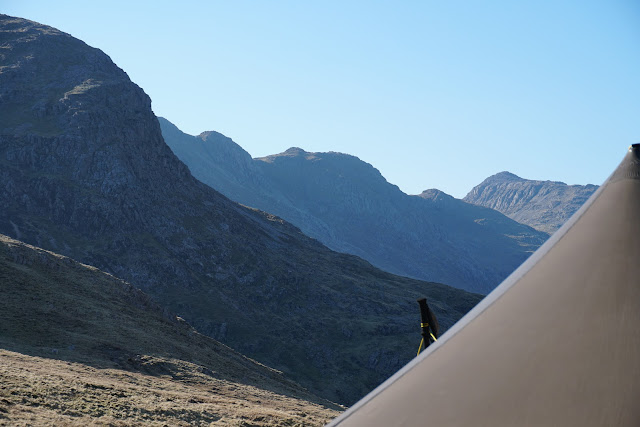 Mr Walker is a fine fellow who positively enjoys hurling his ageing frame up mountains, that could so easily be bypassed by more sensible fellows. He had left us to fling himself up onto Pike o' Blisco and the blighter was still at Red Tarn before the main party. And he wonders why his knees are shot...

However, this feat of athleticism was not enough for the old bird, and he gamely escorted the Doc back up to the top again. Mad'n'Bad. Well, mad certainly.

Another night of well below zero and ice-plastered tents preceded a cracking second day. It's a tricky descent with heavy packs into Great Langdale and once gained the Daunderers split into two parties; one heading for the heights of the Pikes, the other heading first to the Old Dungeon Ghyll Hotel for a Cumberland Sausage, mash, carrots and gravy, washed down with a couple of pints and coffee. 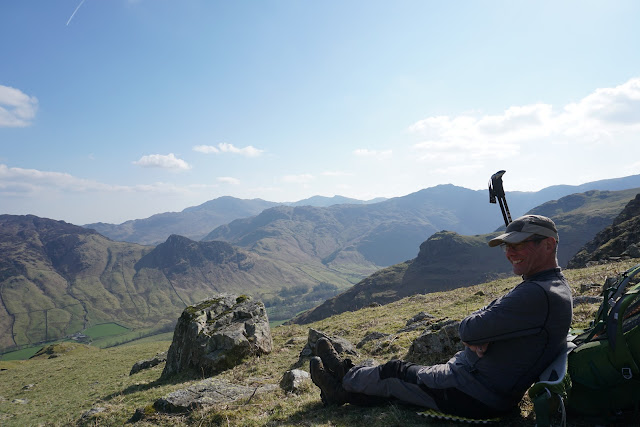 After taking decent breaks, Croydon, Lord E and I finally made the top of the climb and gambolled, some more gambolly than others, down to Codale Tarn where the Summiteers had found a suitable spot well above the riff-raff that was to appear later. 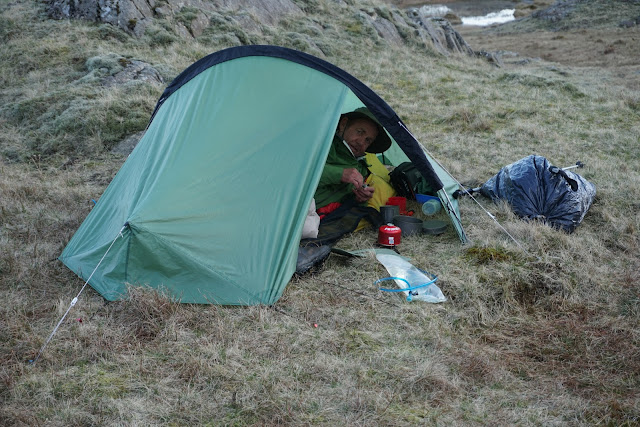 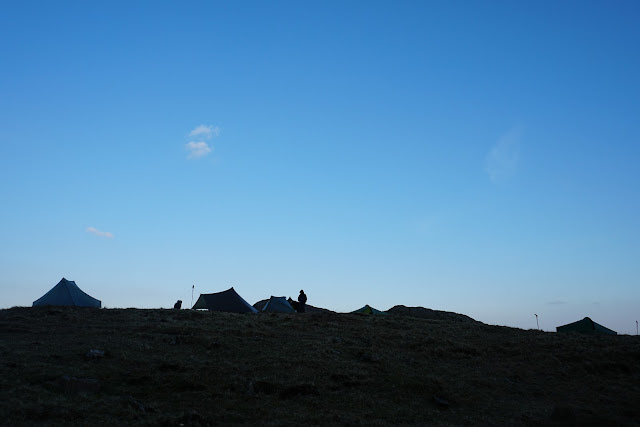 The VVNMan had surpassed himself this morning. The route down Blea Rigg is quite charming. This was a busy Half Term yet we only met a handful of walkers all morning. The ground's interesting and the views extensive. Well worth another visit. 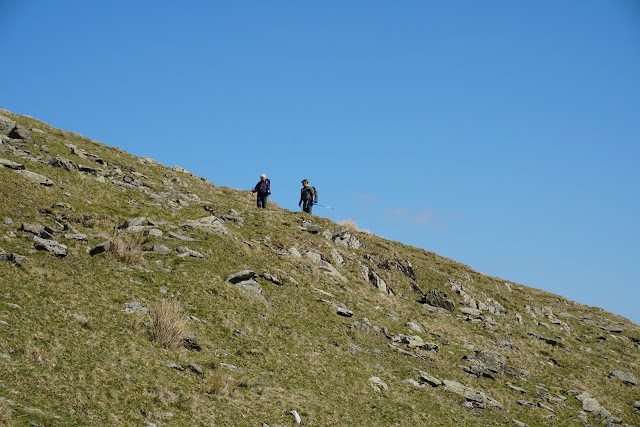 By this point, the VeryVeryNiceMan made his excuses and left for a dinner date with a gorgeous girl, apparently. Judith & Emma weren't put out in the slightest. Honestly.

Having taken command of the Daunder in David's absence, Phil then scuttles off, never to be seen again until the cafe in Chapel Stile. Obviously a born leader, giving his platoon some decent headroom.

Fortunately, Judith took the reins and shepherded her flock back down to safety in Chapel Stile.


A round of applause to David for organising the route, dinner, and herding the cats so they all turned up on time. An excellent job. Another vote of thanks to Phil for all the driving to the Lakes and back to Grantham.

And lastly, heartfelt thanks to all the Daunderers themselves, who make this event such a joy. Life is full of vibrant colours and happiness when you're amongst their company.

Now then - there's the small matter of a walk across Scotland in a few weeks time. Will we be ready? Probably not, but I'm sure it will all turn out OK.


And finally, in the spirit of Old Mortality, here's some music.

Plucked from the ether by Alan Sloman on Wednesday, April 17, 2019