We had slept upon 'interesting' ground in the night, but I managed to contort a shape that accommodated the lumps and bumps that the NeoAir couldn't control and so slept reasonably well for a first night out on a new adventure.

A remarkably chilly morning with a cutting wind, but glory of glories, some sunshine! This was more like it; in fact it was perfect walking weather.


Where are we going today then? enquired Andy. I'm sure he never looks at his maps... In case you were pondering this very question, the maps are below: Today's walk is 25km with 630m of RouteBuddy Uppishness. As a number, the height gain is invariably quite a bit less than anyone else's mapping system., So if you're used to the O.S, MemoryMap or (spit!) Anquet that's probably more like 800m of uppishness.

Confused? Join the club. I've spent my life in a constant state of confusion. I've been ready for the Home for the Bewildered for quite a few years. 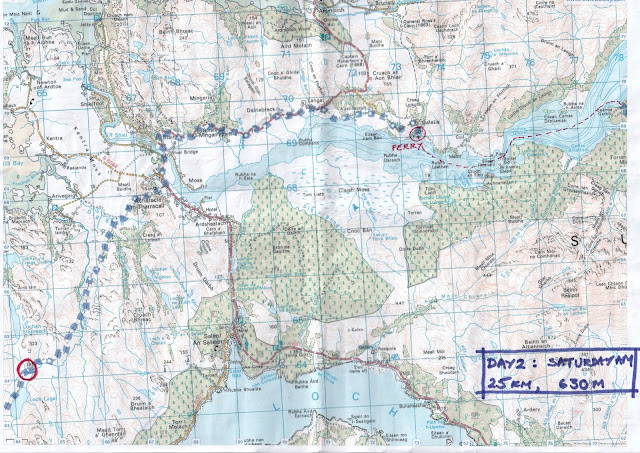 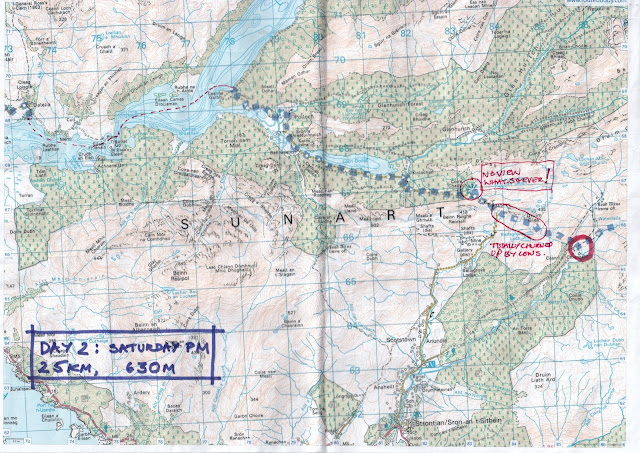 The day is broken neatly into two halves by a boat trip across Loch Sheil, from Dalelia to Polloch. This necessitates an earliesh start to ensure we make the boat in time. Phil very kindly let another group attach themselves to our crossing, and so being late would not only inconvenience the boatman - an incredibly nice smiley man - but also the gatecrashers. Not being a chap to let anyone down, we set off in really good time, so that we could amble at a sensible pace to be well in time and enjoy this beautiful weather.

Seemingly after only ten minutes in our company our wonderful carer, Lynsey, decided that she had had enough of us and headed out across the heather and bog to get away. She was muttering, between gritted teeth, something about a chap call Ben Resipole and heights of ecstasy. After this Challenge dalliance there was a throw-away comment something about seeing us suckers later on.

Fortunately, I managed a snap of our heroine before she went gadding off to goodness knows where and what pleasures of the flesh.

Three vulnerable chaps, of that difficult age then had the walk to themselves. Luckily, it's a delight, with good views and more importantly a very gentle descent on a grassy path all the way down to Acharacle, where upon arrival we sat upon a stone garden wall like the gentlemen of the road we resembled, and watched the village go about its Saturday morning business, whilst we took occasional slugs from our flasks. 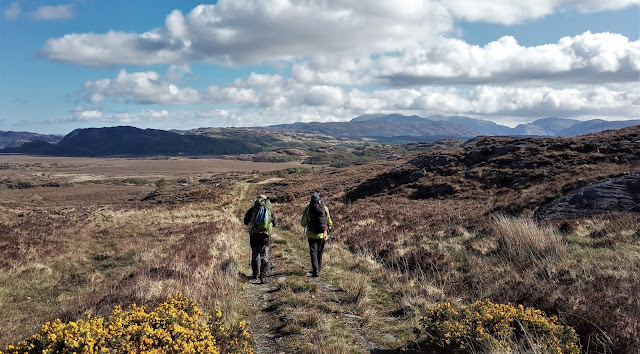 It was as we were strolling along the north shore of Loch Shiel, that the first text messages arrived, followed by phone calls. Bloody technology, interfering with our little wilderness ramble! The messages all come through to Andy, who is a bit of a techie geek and is always in touch with the outside world via SnapChump, Titter, or Arsebook if he's not watching a blockbuster he's downloaded to his phone, listening to it via small plastic ear plugs attached by an umbilical chord to his device.

Apparently, It's JJ, one of the Gatecrashers. Andy says: "The gatecrashers have got to the boat super early and are wondering if they could have our boat..."

Before he could finish his relayed sentence I cut him off mid flow. "Tell them to F*ck Right Off. It's our F*cking Boat, and they're not going going without us because we're on time. Tell him! Exactly what I said. Tell the b*st*rd! Tell him to F*ck Right Off!" To be honest, I'm amazed JJ has used a device as commonplace as a phone for his communication. His usual style is to rig up a sixty foot aerial and communicate via whales, basking sharks and satellites on a wind-up ham radio. "Come in Tokyo!" springs to mind.

'You didn't tell the tw*t to F*ck Right Off,' I repeat, more menacingly this time. 'Give me that bloody phone. I'll stuff it down his f*cking throat!'

Phil and I exchange glances. How could they! What are they thinking! We start doing mental arithmetic, at breakneck speed. A boat travels four miles up a loch at say, six miles per hour. It unloads its bastard ungrateful sodding cargo, with a load of faff, because JJ's involved, and then mooches back to Dalelia. How long does this take? A lot f*cking longer than it will take us to get to the boat ON TIME.

We're twenty minutes away, and On Time. The capitals are important here... Lord E and I come to the same conclusion. We both chorus 'Tell JJ to Sod. Right. Off!" 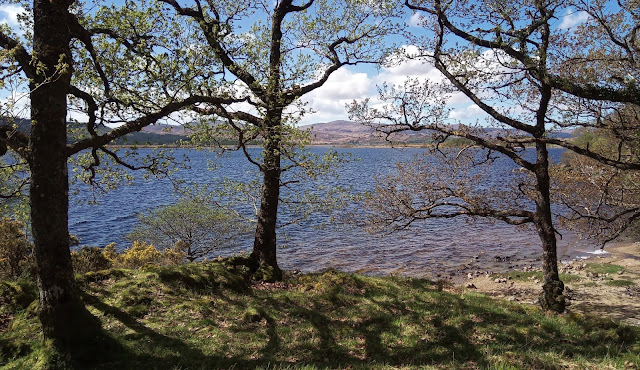 Of course, JJ and his deceitful, treacherous, gang take the boat. We're stuffed. 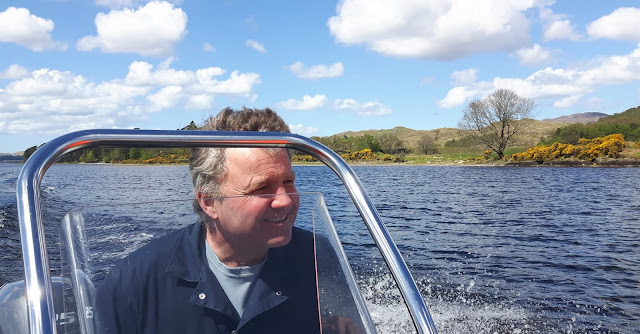 However, what we hadn't taken into consideration was that the Very Lovely and Considerate JJ had obviously been standing next to the boat and noticed its two sodding great Rolls Royce Merlin Outboards strapped to the blunt end. He had realised all the time that this is no ordinary Dunkirk job that bobs up and over the choppy seas . No, this thing's an E Boat that slices through the waves without even a splash, blasting its way through the waves at breakneck speed. Four miles? Eight minutes, tops.
Two minutes to unload, eight minutes return. Back with two minutes to spare.

We leave on our sailing, bang on time... 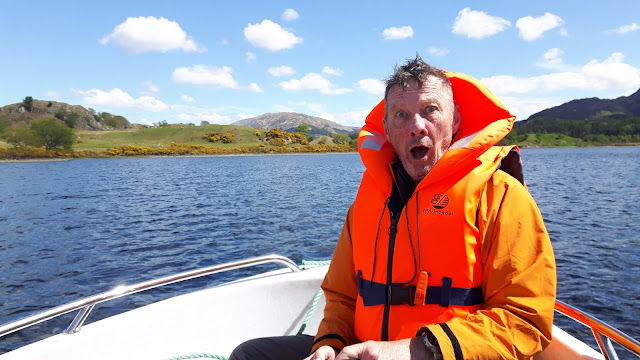 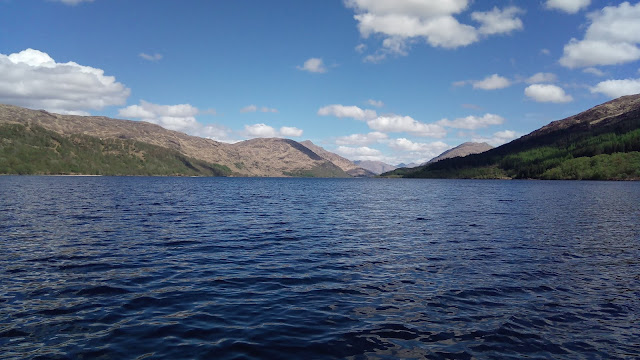 It's a fair old climb up to the top of the road next to the communication mast. Phil and I had done this stretch before, back in the mists of time. It had been a boiling hot day back then and we were younger and less experienced in the gentle art of cadence walking and resting.

However, today was also a bloody hot day and we are older, more infirm with every year, and our knees laugh at the very idea of walking in an any semblance of cadence. We're screwed.

Still, we know there's a gorgeous view-point two third of the way up the climb with a bench, and benches are what chaps of our age look forward to more than a night of passion with Elizabeth Taylor.

And here is that Beautiful Bench!

However. In the intervening years since our last visit, those trees on the slope just beneath the viewpoint have grown by a good twenty feet. There is now no view.

Well, a bench is a bench and we must take these small mercies where we can. We'd seen the view years ago.

At last, we had sweated our way to the top of the hill and could finally enjoy a little off-piste strolling, in a general down-hilliness direction towards our intended camp spot.

This was not how we remembered this particular stretch of loveliness at all! The ground resembled a battlefield. The Somme, perhaps Paschendale? It was incredily chewed up, with pock-holes a good six inches deep separated by narrow slumping clay/muck/ooze to the next pock-hole. It was a nightmare to walk over.

Then we came to a sign. Cows. Highland Cattle had been let loose here in quite dense numbers to do exactly what we had found. This ground is far more welcoming for natural tree growth - so native species would recolonise this barren landscape once again, without the need for man's intervention. This should produce a hardier tree-stock that's likely to thrive in this cow-built nursery.

Be that as it altruistically may. It was still a nightmare to walk over.

We somehow got suckered into a bit of a ravine, followed by a tree bash on a very steep slope down to the bottom. I was knackered. Totally. I ate, and promptly fell asleep, doors open and happy that the day was done.