It's twelve miles today with around two and a half thousand feet of climbing, so nothing to frighten the horses. However, we're heading into the hills again, which is a tricky thing to do if we keep between our northings as we nearing the Angus Glens now which spread out like a fan away from the Cairngorm National Park to the Angus coastline. Today involves crossing Glens Isla and Finlet to make Upper Glen Prosen to camp for the night.

A quick look at the map shows the absurdity of today's route: Upon reaching Craig Lair the sane thing to do would be to follow Glen Finlet's watershed around Mid Hill, Tarmach Hill, Broom Hill and Craigie Thieves. But this of course broaches Northing 70, and so instead we have to descend the side of  Glen Finlet and then climb back up the other side to make Craigie Thieves.

What comes as a genuine surprise is that there is not a single murmur of protest from either Lord Elpus or Mad'n'Bad! I put this down to Mad'n'Bad's unwillingness to map read and Lord Elpus being a damn good sport.

We leave the Christian Centre resplendent in our freshly laundered socks, shreddies and shirts, ready to take on the world. The forecast is fine for the morning, with a freshening breeze bringing heavier cloud later on in the day. The paths are a little confusing to begin with, accompanied by quite a few cows and calves. Then it's open country, if rather squelchy underfoot on the gentle climb up to Loch Beanie.

We have Elevenses in the shelter of the boat house before Andy gets fidgety and wants to move on. Phl and I are quite happy to spend an hour here as there's no rush today. However, the psychological pressure from Andy builds and eventually we cave in and repack our food bags into our packs and slowly splodge away from this little haven to squelch along the shore of the loch. It's actually easier to paddle in the shallow waters than to walk through the boggy shoreline, which has the added advantage of cleaning the build up of mud from earlier. 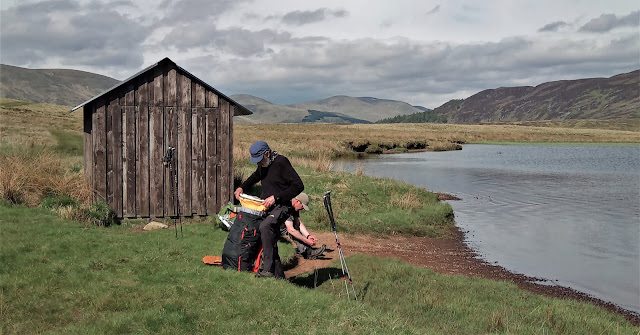 Then we head due north until we come across this lovely little bridge over the River Isla. It appears to be of segmental construction. I suspect it was an Assault Bridge in a former life. I don't recall seeing any others in these parts. Does anyone have any information on them? Leave a comment, there's a darling!

What's marked on the map as a footpath climbing up to Craig Lair is of course another ugly scar on the landscape - a bulldozed track for shooters to kill wildlife for fun. It's a bit depressing. Andy waits on the skyline for the tortoises to catch up. He takes the snap below which, when blown up shows how we're struggling manfully to keep up.

It's a bit nippy on Craig Lair and so we drop down the western tributary of the Finlet Burn for some shelter and an afternoon snack. Following the burn down we get parlously close to Northing 70 but confident we're remaining within bounds. It's a lovely soft stroll down to the valley bottom.


It's a bit of a sweaty grunt from Gen Finlet up through the brash of the old forest and the new plantings to the fellside and so Phil and I take a long diagonal up to the small drop in the ridge whilst Andy take the hill head-on and straight up. I'm sure the bastard has nuclear powered trousers. Andy took the following picture; you might just make out two tiny specs making their way laboriously up the hill, in the centre of the picture.


I took the next picture; it's on one of the rare occasions when I'm ahead of Phil. He must have had a gear faff, or re-tied his laces. 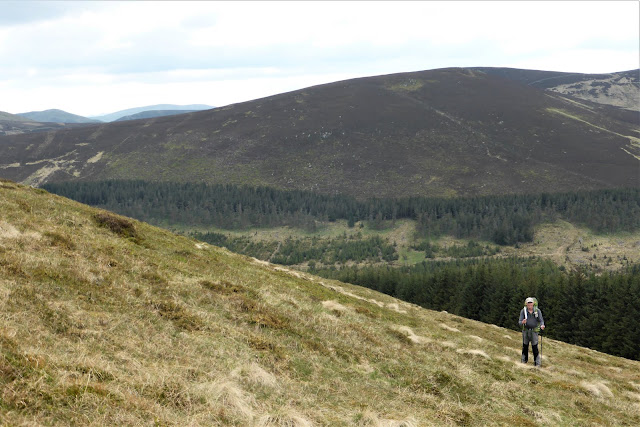 When we finally make the ridgeline we're confronted with a double width electric fence, with no sign in either direction of any gate or stile. The estate owners are obviously complete and utter bastards.

Andy will probably use stronger language to describe the oafs. He took an almighty kick from the first fence's top strand, as you can see below:

After some limbo dancing and hauling heavy packs up and over the beasts we make our way around to Craigie Thieves for a sit down and snack.

It's a merry tumble down the (cut-down) forestry fenceline to Prosen Water. By the time Phil and I make the bottom Andy has already skipped across the stream's boulders and waits patiently to guide Phil and I across. Of course, neither of us fancy the leap of faith mid-stream, that if unsuccessful would have us up to our oxters in water. After an eternity of faffing we both decide to walk up to the bridge instead and walk back down to rejoin our own Bob Beamon.

Andy then decides he doesn't fancy any of the available pitches and so disappears down the glen to look for better. At this point, Phil and I find semi-reasonable spots on our side of the stream and so decide that they'll do for the night. There's no sign of our Scarlet Pimpernel so we shrug and make camp.

Today's route is fairly straightforward - a seventeen mile yomp, down Glen Prosen to the memorial to Scott's doomed South Pole Adventure and then a wiggle through Glen Clova to head into the hills again for a wild camp in a lovely little glen.

I really don't mind the occasional stroll down a road, which is probably just as well as this year's route required a fair bit of it. You need to have prepared for it and look for delights other than the wild quality of the place. The roadside flowers and birdsong are my favourites. How the farmers are using the land, the stands of trees and the architecture and building materials of the homes nestling amongst the glen.There's all manner of things to charm, and lets be honest, it's infinitely preferable to your nine to five humdrum life.

I'll happily bowl along all day like this, with the skull cinema replaying old favourites.

Andy, however, is not a fan. To put it mildly. 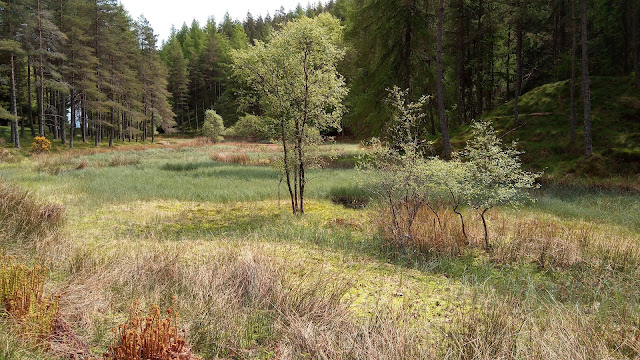 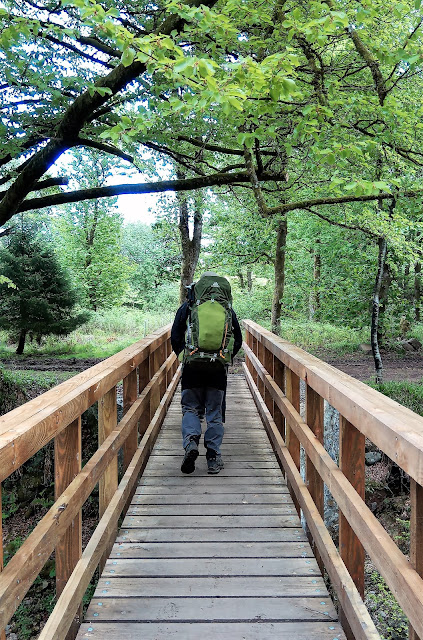 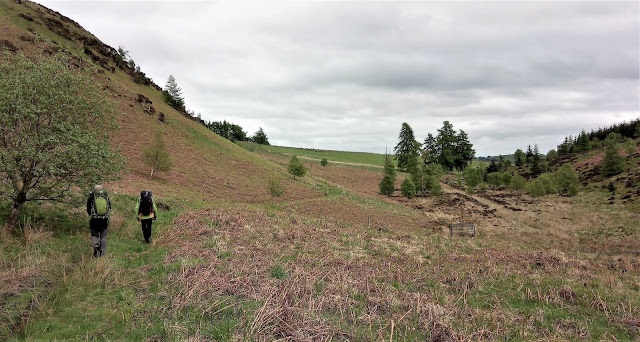 The afternoon is spent wiggling through little glens on paths that are barely here, and in some cases, not in evidence at all for stretches at a time. Had we not set ourselves the ridiculous ten kilometre constraint we could quite possibly never have discovered these little gems. 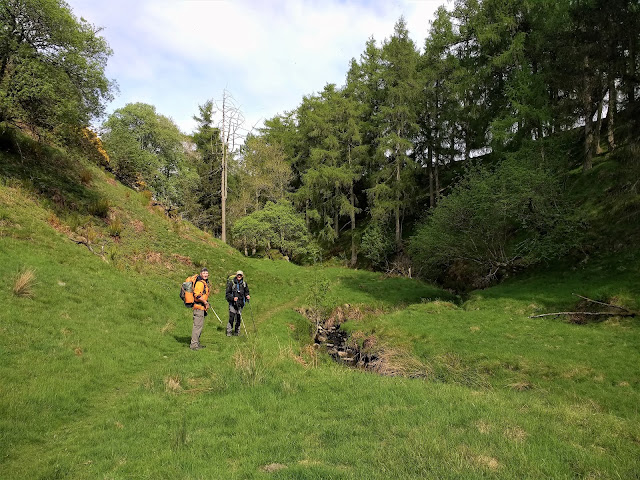 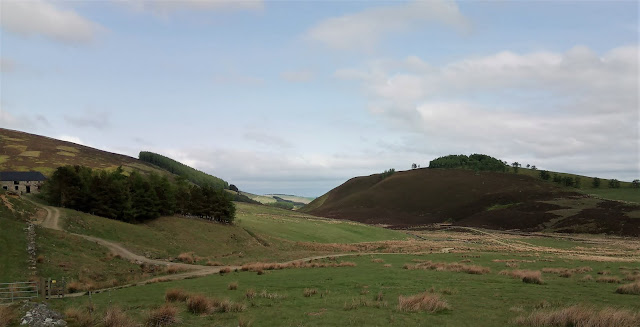 Our camp spot is just about perfect. Sheep nibbled turf, a babbling clear stream for water, and solitude. 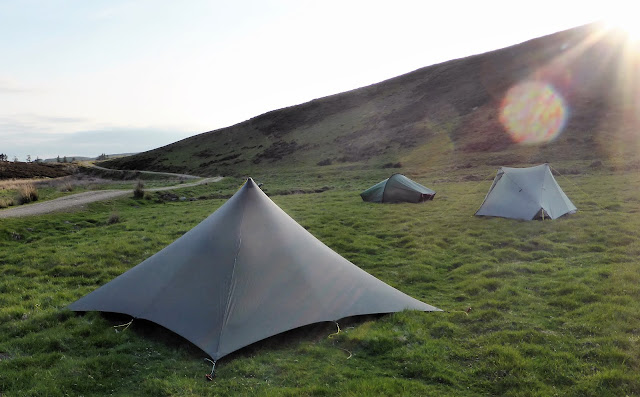 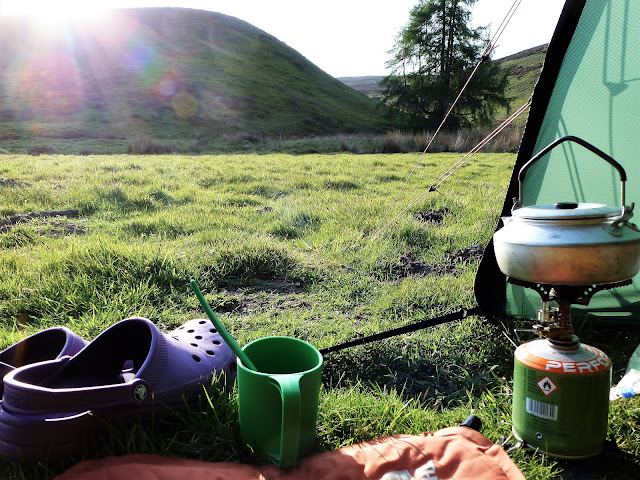 On paper, it didn't look to be a great day in store but if you're prepared to take your delights from whichever way they come it's a delightful day.


EDIT:
We have a pretty clued up readership here. Many thank to Phil Holden for letting me know that it's the box bridge designed to be carried by the Churchill ARC (Armoured Ramp Carrier). Designed for the D Day landings in World War II to bridge tank traps, ditches and sea walls etc. It was part of Hobart's 79th Armoured Division. This means that at the time we crossed it, the bridge was 73 years old. Not bad for a temporary structure! 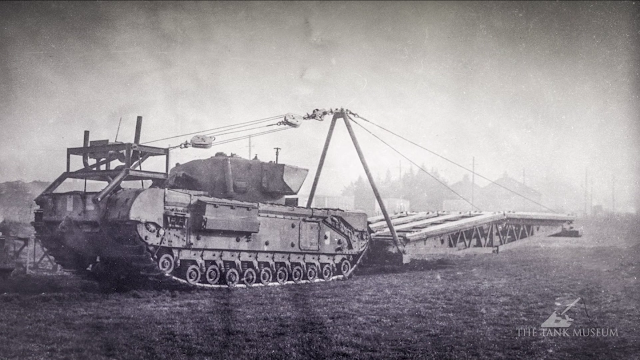 Plucked from the ether by Alan Sloman on Tuesday, February 11, 2020