Observant members of the congregation will have noticed that some days in this year's write-up are bunched together. The main reason for this is that they are similar in nature and so fall naturally into one blog post. Today's write-up has a post all of its own because it stands out in my fading memory as one of pure joy.

Bizarrely, we start the day as a united team and decide to head for breakfast at the Sugar Bowl - a first class cafe in Kingussie High Street and happily right next door to one of the best butchers & pie shops in the Highlands, in King Street.


As we tucked in to our Full Highlands a group of American Challengers arrived. I'm afraid I can't tell you their names as they each have trail names that went in one ear and straight out the other. They seemed like really nice guys. Their rucksacks were incredibly small and obviously very lightweight. They also looked like they could each walk several Challenges in the time it would take me to complete one.

Walking out of Kingussie on the way to Tromie Bridge Lord Elpus and I fell into a philosophical conversation. Should we rethink what we carried ourselves? At this point our Colonial Cousins overtook us and strode away effortlessly.

Over the years we had steadily chipped away at how much we carry. Back in 1995 on my first Challenge I recall my pack weighing in at over 41 lbs with food and whisky for 3 days. Over the years it fell to around 27 lbs and has since risen slowly to around 33lbs. Most of the increase was down to additional comfort: A heavier and warmer sleeping bag, a more comfortable pack, hotel trousers and shoes, and more warmer clothing. However a fair bit was down to whim: A more windproof cooking system, heavier camera gear, electronic apparatus and associated chargers. More heavyweight waterproof stuff sacks. You can never be too safe you know...

Lost in conversation neither Phil nor I noticed that the Two at the Front were beetling along at a fair rate of knots until we rounded a bend in the road and saw them standing, looking back at us both ...

The day was now brightening up considerably and so layers were stowed in packs and we ambled onwards. This was a well worn route for us; I've lost count of how many times we've headed this way to the Feshie. It's a lovely, effortless walk. The morning passed with birdsong, sunshine and a great deal of happiness. 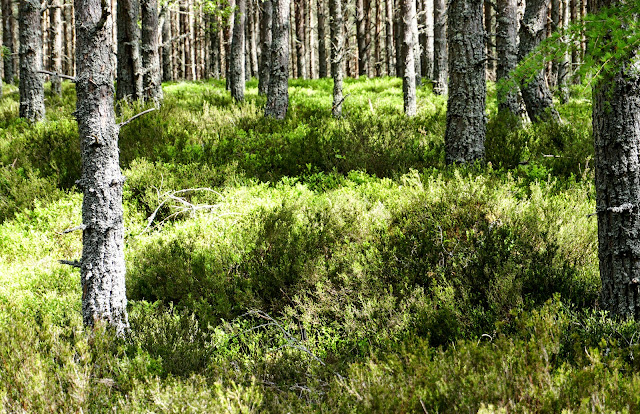 I'm not quite sure how, but around Corarnstilmore - the old sheepfold - the Two at the Front became the Two at the Back, and it was only when they re-passed us as we were tucking into an early lunch that this became evident.

The previous evening David had received news of his Mum's declining health and over the course of the morning he'd come to the conclusion that he could trim a day or so from the walk and get back home earlier to see how he could help. Sadly, this was to be the last time Phil & I would have his company this year as he was about to set off on a very large day with Andrew as part of this plan.

The re-established Two at the Back continued onwards into Glen Feshie and a couple of delightful stops at pathside streams and beneath sheltering Caledonian Pines. The already lovely day was now about to come a magnificent day. The map will help with the story. Right click on it to open it at a larger size in a new tab, for referral. You can click on all the pictures to blow them up to a decent size.

The next eight photographs are of the wonderful climb on the footpath up Slochd Beag. Leaving the shade of the wonderful pine at Ruigh-fionntaig the path isn't immediately obvious but soon becomes a single track amongst the heather. It's overgrown in places, but if you keep heading in the right direction it's clear enough.

The next picture (if you blow it up) shows the nature of the path well as you slowly gain height.. There's nothing gut-wrenchingly steep; it's a beautifully crafted stalker's path. 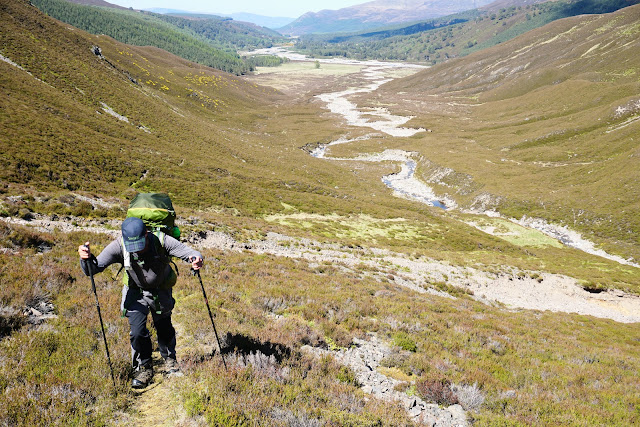 There are a couple of really good zig-zags - steepish in places -  that could be easy to miss if you're not paying attention but the views are now getting better and better as you enter the narrow chasm of Slochd Beag. 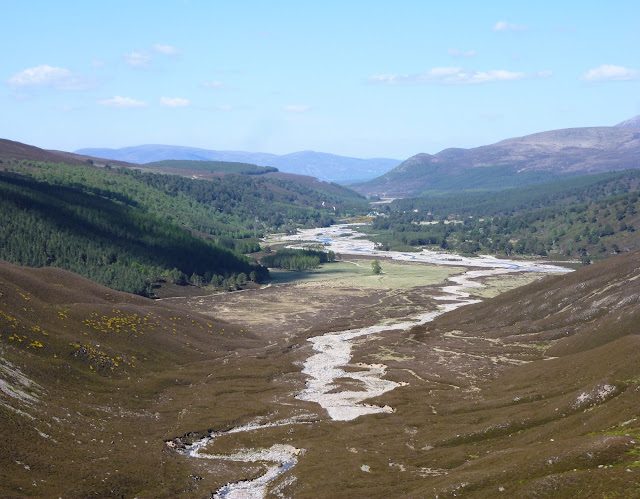 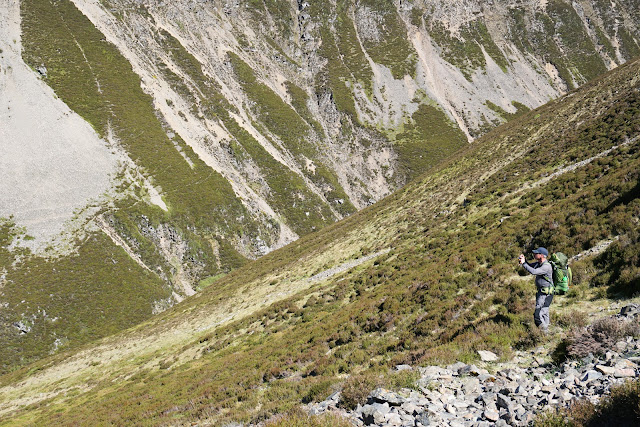 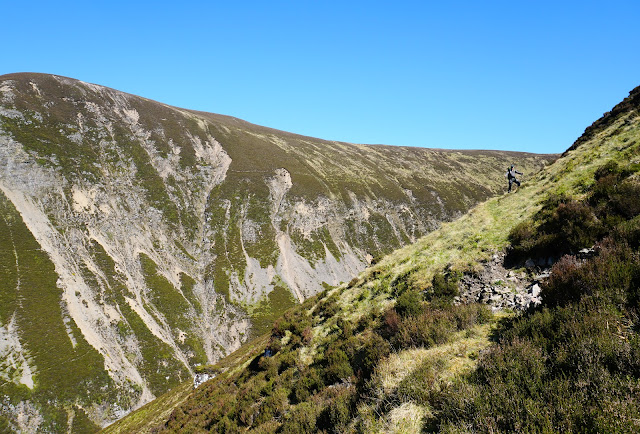 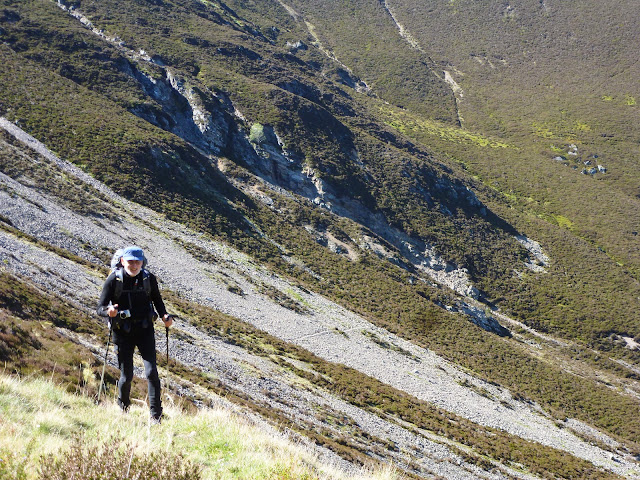 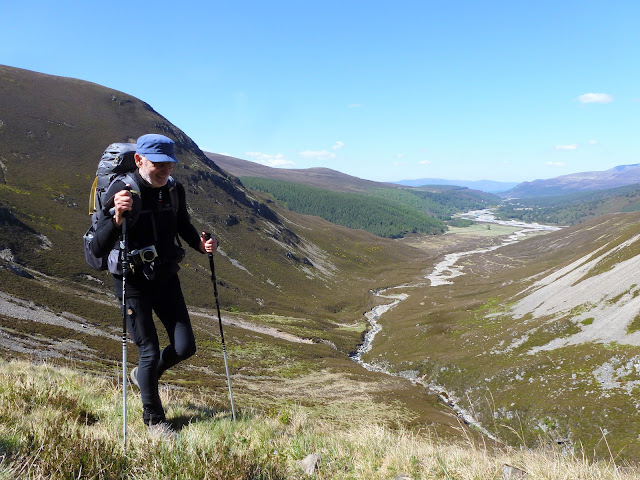 This has to be one of most rewarding little climbs on the Challenge - an easy gradient, not too much of a climb, around 900 feet of ascent, and totally joyful! Sections of the path are becoming slightly overgrown or subject to inundation from soil and stone from above but it's always fairly obvious where you're going. 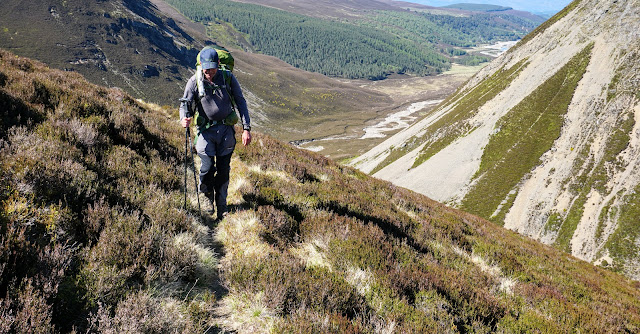 Spend time on this. Enjoy it. Don't go at it like a mad thing. Take pictures. If your pulse starts racing you're doing it wrong. It's bloody wonderful so make the most of it. We certainly did. 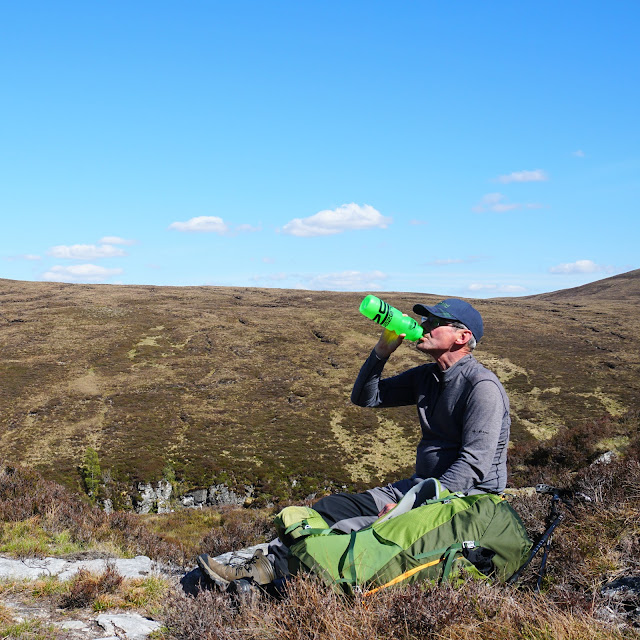 We finished our flasks of water at the top as from here on there's no need to carry any, as you're going to follow a beautifully constructed little path alongside the Allt Lorgaidh up into the Glenfeshie Forest. You'll have noticed from the map that there are footbridges shown - indeed there are far more than the map suggests, each beautifully built over the gushing little side streams. You're slowly gaining height on this section of a couple of miles of the most fabulous walking. The air was full of bird song, chiefly skylarks and buzzards. The water is crystal clear and the sunshine, blissful.

At the head of the Allt Lorgaidh you contour round above the peat hags to collect the defile Clais Bheag which supports the fabulous Caochan Dubh. We didn't see another soul all afternoon and yet we were never more than a mile or two from the Great Trade Route up Glen Feshie where countless Challengers, and others would all be on their way. Our route involves an additional 500 feet of ascent and probably another three or four miles of walking, but for both Phil and I there is no comparison in the quality of the experience.

I've extolled the virtues of Caochan Dubh in the past on here, but it's charm lays in the fact that it is made up of sections of blissful downhill walking on springy turf, punctuated with little rocky drops of no more than a metre or so that herald the next section of grasy bliss. You can pick your way over the gurgling caochan to your heart's content as it is barely a foot or so wide and very often quite a few feet underground in tunnels in the black peat.

We walked on a little further than our intended stopping place, just in case Andy and David had come this way, as they hadn't let us know that their plans had changed. We'd assumed they had, because we were sure we would have spotted them climbing up Slochd Beag had they been following the route sheet. But they are a pair of racing snakes, so there was a chance that they had, so we continued until we caught sight of the Upper Upper Feshie in case they had stopped there as we had discussed this as a possible overnight spot. As they were not, we found a couple of lovely spots either side of the caochan and made our homes for the night.


It had been one of the very best days of my twenty four TGO Challenges. In fact, it was perfect.

In the spirit of Old Mortality, to finish a perfect day here's musical perfection: Lucia Popp at her very best. You'll need to turn your speakers up as for some reason it's been recorded at a very low volume.

Plucked from the ether by Alan Sloman on Saturday, April 04, 2020