As forecast, it is pouring with rain. We have twenty miles ahead of us today, the first four trackless, following the streams down hill. We'll be clambering over river bluffs and thick heather. To add to the mix there's potentially a big river crossing and a large wet bog to negotiate.

Quite a few would baulk at the prospect. I've never understood why but Phil & I seem to relish the challenge. We plan the day ahead by breaking it into manageable sections with short stops for food and drink. The first leg is about 6km or an hour and a half, whichever comes first, with subsequent sections of about an hour and a quarter with fifteen minute breaks.

In the past, our companions very often don't 'get' the first stop after only an hour and a half because they feel as right as ninepence and are eager to get on and get the mileage done. I sense their frustration but I'm afraid I *know* that this system works and works well for Phil & me because we're stopping before we need to rest. If you get to the point when you really need to rest, I believe you're doing it wrong; by the end of a very long day you're going to be knackered and footsore.

There's also the psychological aspect to consider; a very long day broken down into chunks is nowhere near as intimidating as a massive twenty miler across rough country.

We're heading eastwards, always a good idea on the TGO Challenge, with the wind and rain coming from behind. We bounce our way down Caochan Dubh and splash our way across the Upper Upper Feshie dry-shod. Luckily, it's been so dry the previous week that the peat is soaking up the rain rather than shooting it straight into the streams.

The boggy watershed between the River Feshie and the Geldie Burn goes surprisingly well for the same reason. We're cantering along at a good rate and all is remarkably well in our little half worlds - we both wear glasses and so invariably can't see in too much detail what lays ahead in the rain and mist.

We cover the miles in excellent form and as we approach White Bridge in the distance we spot two figures laden down with enormous packs leaving the shelter of the abutment. They appear to be going very slowly. We're both of the same mind. Challengers and probably in need of a  bit of cheering up. In surprisingly short order we're catching them and we realise that they're not in fact huge packs but instead the Challengers are incredibly small with normal size bags...

Gloriously, the answer was a resounding YES! We'd caught up with Lou & Phyllis LaBorwit from Bowie, USA. I say gloriously because these two Challenge Legends are shining examples of Never Ever Giving Up to age or infirmity. They must love each other to pieces because they invariably bicker their way right across Scotland and have been doing so since time began. Lou's first Challenge was in 1994, when he crossed with the magnificent Reverend David Towers. Phyll's first was the following year, with Lou. Back in 1994 Lou had just started retirement. On this Challenge they were 89 and 87 years old and were on their 17th & 16th Challenges.

I love them both to bits.

We spend half an hour or so together - we need to know that they're doing okay - as we stroll along at their pace catching up with their walking adventures in other parts of the world. Whenever you part with them, you feel the world's a better, kinder place. They're also fun, charming and thoroughly decent. This is to be their last Challenge and so it's wonderful to be able to walk with them for one last time.

Our next objective is Mar Lodge. The Mar Lodge Estate is owned by the National Trust for Scotland and for more years than I can remember have offered shelter to weary Challengers. For the last few years they've provided tea, coffee and biscuits in the Stable Block for a small donation to a charity. As we drop our packs outside and peel off our wet outer layers I'm delighted to notice Ben Dolphin pull up in an NTS vehicle.

I first met Ben in 2011 when I organised the 'Wake for the Wild,' a protest against the rapidly increasing  industrialisation of the Highlands caused by the proliferation of wind farms in Scotland's wild places. I called it a wake as I realised even back then there would be no stopping the SNP led Scottish Government's determination to carry through this act of destruction. The protest involved carrying a coffin through the most recent estate to have been bribed by the millions on offer by the energy businesses to the top of the Monadh Liath. There, a wonderful Humanist Celebrant Janet Donnelly read a piece she had prepared over the coffin.

I make no apology for reproducing Janet's fine eulogy here:

We have come here today because we are the lucky ones. We are lucky because we are the last generation who remember and who have had a chance to be inspired by the Scottish landscape and everything it represents.
Take a moment now to look around you – really take in what you can see because this may be the last time that you will be able to experience that extraordinary feeling that comes when we feel ourselves dwarfed by the magnificence and splendour of the unspoilt wild land around us.
As more and more swathes of the Scottish wilderness are pillaged in the name of sustainability, we mourn their loss as if they were dearly loved friends who taught us valuable lessons in life like the fact that there is more to life than 9 to 5, the daily grind and keeping up with the Jones’s. Up here we permit ourselves to escape just for a little while and allow the splendid isolation to lift our spirits as the realisation dawns that we are indeed just a tiny speck on this incredible planet.
This land is in our hands, in trust for our children and our children’s children and if the politicians and the fat cats have their way, they will look back on our stewardship of the land and hang their heads in shame.
The politicians would have us believe that there is no other way and nobody denies that something must be done to reduce reliance on fossil fuels and nuclear power but we contend that the destruction of the Scottish landscape for ever is not the answer.
The technology is flawed, the sums don’t add up and the claims of large scale onshore wind power station supporters just don’t stand up to scrutiny. Add to that the news that we – the taxpayer have paid nearly a million pounds to the turbine owners to switch them off at times of peak output and we have the makings of a first class farce.
It isn’t funny though – nobody is laughing - unless you count those on their way to the bank. Let’s call a halt to the desecration of our wild landscape and the knee jerk reaction that says ‘do something – anything and we’ll think about the consequences later.
John Muir said: “Keep close to Nature's heart... and break clear away, once in awhile, and climb a mountain or spend a week in the woods. Wash your spirit clean”
I invite you all to look around you now and try to work out where you will go to wash your spirit clean when all of this is gone.
Could you all please raise your glasses – hip flasks – mess tins, whatever you’ve brought with you?
A toast:
To the wilderness – may it continue to inspire us, arouse passion in us and provide sustenance for our souls. May those who seek to destroy it hear the voices of those for whom it is an integral part of life and may it long be regarded as an asset rather than a resource.
The Wilderness.

Ben was right at the front of the protest and helped carry the coffin all the way to the top of the Monadh Liath. Bless, him, he also carried it all the way back down again, along with Chris Townsend and all the supporters who turned out for the protest so that it could be reused at protests throughout Scotland.

The protest was covered by the Times (and a couple of Scottish newspapers) with a magnificent photograph and a good write up. Two German and French Television companies were also there to record the proceedings. Unsurprisingly the 28Gate BBC didn't want to touch it. They're still rabidly pro-wind and virtually the official outlet for outfits like Greenpeace and WWF. It will doubtless continue to be so until it is finally broken up and sold off. It won't be a moment too soon.

Ben has an excellent website, Benvironment, well worth exploring. He became the massively popular President of Ramblers Scotland and works hard on their behalf. Amongst his many activities he spends summers as a Ranger at Mar Lodge and writes for Walk Highlands. Visit his site. It's a mine of wonderful blogs, vlogs, pictures and everything to do with the Scottish Outdoors. He really is an inspirational fellow. It was a pleasure to catch up with him again.

Of course, the refreshments were enjoyed by a stream of Challengers who came through the door. The chap in the picture below has a fascinating life, globetrotting with incredible entertainers, but still choosing to spend the larger chunk of his holiday walking across Scotland with the rest of the bewildered and bedraggled. There's something about the TGO Challenge - it attracts some amazing characters.

All good things come to an end and there's nothing for it but to shoulder the packs and head out into the weather again to make Braemar.

Our good intention of heading straight to our excellent B&B in Braemar went out the window as we entered the portals of the fabulous, newly refurbished Fife Arms Hotel. More on the refurbishment later, but I love the humorous take on Scotland's heritage so beloved by VisitScotland and their ilk. The main bar has been renamed the Flying Stag and I love what they've done!. 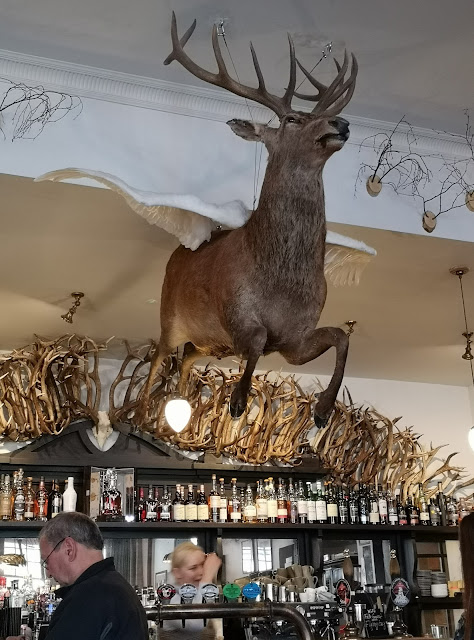 Eventually we did find our B&B, and once again Andy & David had chosen to let the Two at the Back have the better of the choice of rooms. However, time was getting on and after a desperate search for somewhere to have dinner, the wonderful Fiona at the Braemar Lodge Hotel came up trumps again, and Lord E and I did it in some style. Thank you, again, Fiona.

The weather had been poor all day, however the dramatic cloud draped land we covered and the people we met today made it a day to treasure.

Here's a little more bliss from the blissful Lucia Popp:

Plucked from the ether by Alan Sloman on Wednesday, April 08, 2020