As many readers of this blog will be aware, my wonderful brother Dave gave me one of his kidneys back in June 2013. He quite literally saved my life. Prior to my transplant I wrote a few posts about igA Nephropathy which can be found by clicking on the links below.
https://alansloman.blogspot.com/2012/08/iga-nephropathy-and-me.html
https://alansloman.blogspot.com/2013/01/iga-nephropathy-and-me-update-2.html
Since receiving Dave's kidney I've been on anti-rejection drugs - immunosuppressants - to ensure the kidney is not rejected. The dosage fluctuated a lot to start with to find the optimum level of medication.
Things went along swimmingly well but in the last six months or so (coinciding roughly with my enforced four and a half month Covid-19 lock down as a person at severe risk) I realised that things were getting a little bumpy and I've had quite a few trips back and forth to the Oxford Churchill Renal Unit.
I've pasted a few of the key results below, alongside explanations of what the tests measure. There are loads more results, but they all confirm the same downward trend in performance. Simply put, I'm in need of another transplant. 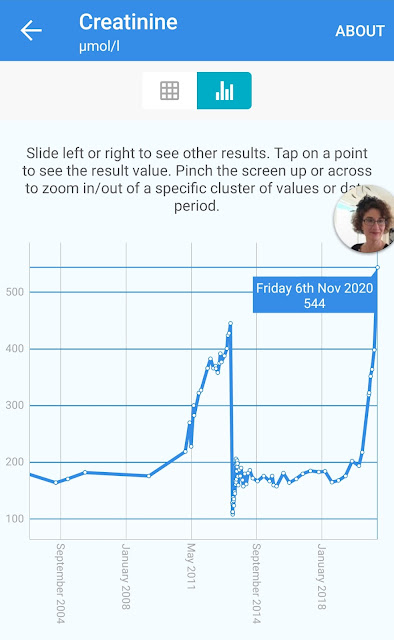 Creatinine is the best routine blood test for measuring how well kidneys are working. It's produced by muscles and put out by the kidneys. The 'normal' range for Creatinine for healthy people is between 60-110. Immediately prior to my 2013 transplant mine reached 445. It's now 544. 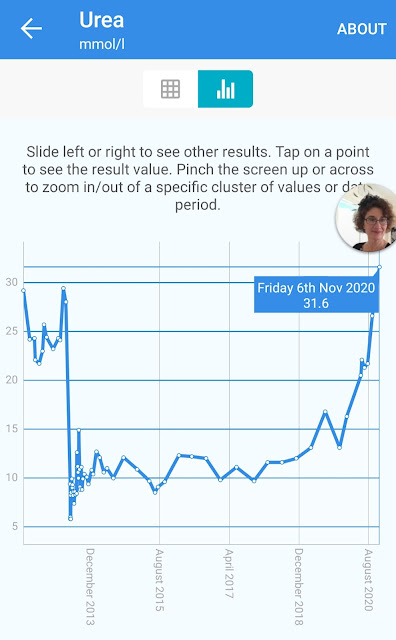 Urea is a small molecule produced from protein and put out by the kidneys. The normal range for Urea for healthy people is between 2.5 and 7.0. Prior to my 2013 transplant mine reached 29.4. It's currently 31.6 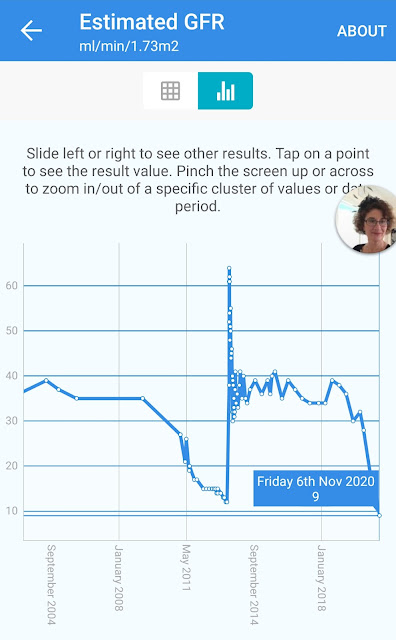 eGFR (Estimated Glomerular Filtration Rate) is a test of kidney function. It uses the result of the Creatinine test with age and sex to estimate an approximate percentage kidney function. The normal range is above 60%. Prior to my 2013 transplant mine sank to 12%. It's now a disappointing 9%. 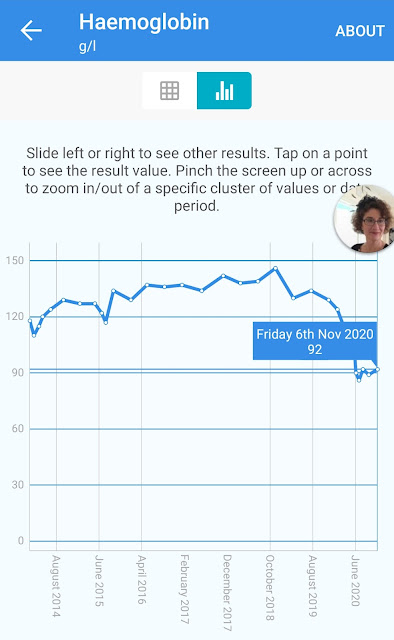 Haemoglobin is the red stuff in blood. It fills red blood cells and carries oxygen around the body Normal is slightly higher in men than women. Men's results should typically be in the range 130-180. The kidneys produce a substance called erythropoietin (EPO) which stimulates the bone marrow to produce red blood cells. Loss of EPO production is usual in patients with advanced kidney disease, and may be severe. Loss of EPO production is a major cause of anaemia in renal failure Treatment with artificial EPO has been a huge advance for patients with renal failure.

Prior to my transplant in 2013 my Hb had dropped to 87 but with EPO treatment it rose prior to transplant to the giddy height of 108. I've now been on EPO for a few months, but my latest result is 92.

On each of the above charts you'll see an image of my sister Meg, as I took screen grabs of the results whilst on Messenger with her. Back in 2013 she had offered one of her kidneys for my transplant along with my brothers Dave and Gwyn. Quite amazingly she has stepped up again, and volunteered one of her kidneys. In the last few months she has been back and forth to Oxford to be tested to see if she's still a suitable donor.

You cannot begin to imagine how this makes me feel.

COMMENTS ARE TURNED OFF

Plucked from the ether by Alan Sloman on Saturday, November 07, 2020

New comments are not allowed.