Mid-June nights in the Highlands are very different to those of mid May. Last night it didn't get dark. Dusky, perhaps, but not dark. Also the bloody larks never stop singing this time of the year! They were chirping and trilling away at gone eleven at night when I finally fell into the arms of Ms Hepburn and then again at three in the morning.

Don't these little bastards ever sleep? They were determined that I wasn't to either. Finally I snoozed, rather deliciously, in and out of consciousness from three to around five, then decided that I ought to breakfast, reduce the size of the sack of meds I was carrying and sort out today's maps that I hadn't had the inclination to do yesterday evening as I was so zonked.

Packing away was again interrupted by clouds of midges until thankfully a breeze got up and stayed awhile. In my mind I had broken the day down into three stages - the amble to Torgyle Bridge, the walk up to the top of the military road to look out for a lunch spot, and then the easy descent down that leads to Jenkins Park and Fort Augustus. Bite-size chunks are so much easier to deal with than thinking of the whole day in one piece.

So here's today's route. Nothing to frighten the horses, and planned to give me time in my B&B to laze around for a while drinking cups of tea, eat all the biscuits, sort out the food parcel, do the laundry and have a wander around the village and have a bite to eat and drink. It's all go, you know.

The stroll down to the start of public road at Tomcrasky went well, but upon reaching the tarmac and heading east once more I realised that I was absolutely dog-tired. I strolled on for a mile then decided to call a halt, dropped the pack on a grass verge, leaning against a taught wire fence and had a rest. I'd barely done two miles. Cashews, chocolate coated cranberries and flapjack. Water with a fizzy orange tablet. The last of the crushed crusty rolls. And a snooze. About half an hour of a snooze, I think, as I was woken by the post man leaning out of his window inquiring as to my health.

'Much better now, thank you.'

Standing up, all by myself, with no help whatsoever from Lord Elpus, I swing my pack onto my shoulders and glanced westwards to notice that the sky was a funny colour. It was blue-grey with a hint of light brown with hanging pale grey wispy trails.

Fortunately I was heading east. The post van passed me, now heading back from the dead end and tooted in a friendly fashion. His windscreen wipers were on.

It was a gentle mist at first but as I walked through the increasingly smart Dalchreichart it turned to a moderate drizzle. Nothing to worry about, but I donned the flashy new lightweight coat, just in case. By Torgyle Bridge it was that thin, soaking stuff the Met Office might describe as 'light rain.' By the time I was climbing southwest on a forest track up the old Military Road it would be described as 'moderate rain.' I was now decked out in my over trousers and gloves, playing the drippy-hat game* - first devised by a young pre-Professor White in the depths of the Ballochbuie Forest twenty three years ago in torrential rain.

* The drippy-hat game had very simple rules. Each drip collected on the bent-into-a-V wired peak of your Lowe Alpine mountain cap had to land on alternate toes of your walking boots. The first drip on your left toe. The second on your right. There; them's the rules. The winner is the chap (or chapess in these modern times of ours) who can continue for the longest without missing a toe.  I'm pretty sure Richard made it into the high twenties after some ten miles of walking in the pissing rain.

Now heading up the hill in a generally south easterly direction, the path was a muddy trod in a grassy break in the forestry, badly scored by mountain bikes and trials bikes, with trees occasionally trying to reclaim the break, their branches sweeping my body wetly as I passed. There are a few small streams to cross to make the walk more interesting. It's a continuous gentle gradient, designed so a team of horse could pull a gun carriage with which they hoped to blow any mutinous Scot to Kingdom Come.

I enjoyed this section - not because the Scots were to be blown to Kingdom Come, I might add, though I could think of a few where it might be a good idea - but because the wind was from behind, the earth soft under my boots and that I was managing the climb reasonably well, without any of the expected huffing and puffing and the miles were being eaten into. Just before joining the new Beauly-Denny Pylon road (it could not possibly be classed as a track) there's a really lovely dingly-dell section with a stream crossing (the Allt Phochaicain) with lots of grass, and mused that it would make not too bad a camping spot (*Lodged for further reference for years to come)

The Pylon Road in all honesty is ghastly. It's grey/black, stony, very wide and smashes its way through the landscape like a motorway. By now, thankfully, the moderately heavy rain had eased back to light thin stuff, and then again to wind-blown drizzle as I reached the top of today's climb in the Inchnacardoch Forest - great swathes of which had been cut down, leaving a mess of brash and churned up mud, to make way for the new giant pylons.

Lunch was a surprisingly chilly affair just after the Beauly-Denny pylons, with black flies with dangley legs. Swarms of the blighters. So, I've had swarms of midges and now these devils.  They didn't bite, but they were all over me. Googling them, I think they might be Hawthorn Flies 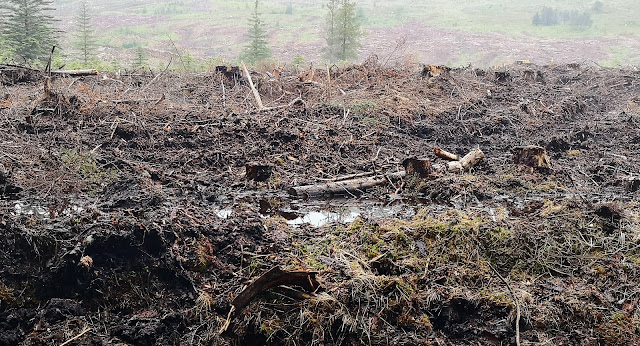 The military road heads downhill in a leisurely fashion until you get to the zig-zags - a well constructed track through head high soaking wet bracken to drop you very quickly down a great height to the track that leads into Fort Augustus.
As I walked along the track and then minor road into Fort Augustus a wave of exhaustion hit me like a truck. There was a children's play park off to the right with a bench. My legs and feet ached like hell and I slumped onto the bench for a good half hour. I was not a hundred yards from my B&B - Rose Cottage, highly recommended - but it seemed like miles away.
I dropped into my usual routine of lots to drink and plenty of instant calories and then pushed myself up the steep drive to my B&B. I was there by early afternoon. My hosts had the Covid precautions uppermost in their planning for guests and it was all incredibly well organised. They also advised me to book my supper in the village straight away as they knew it would be busy tonight - excellent advice.
There followed a good hour or so of doing bugger all apart from drinking tea and scoffing biscuits. My legs and feet were grateful and gradually stopped shouting at me. 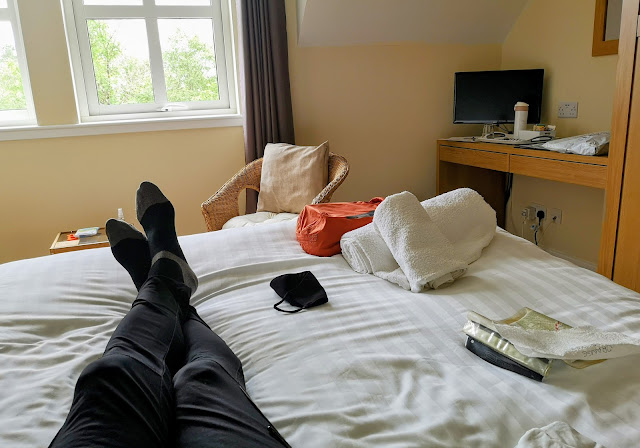 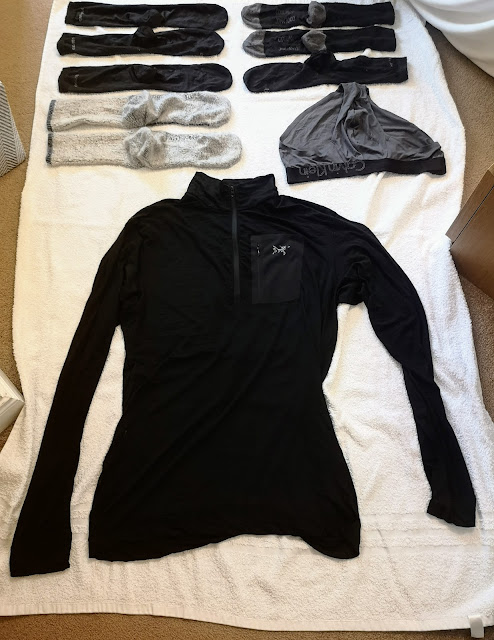 1: Wash clothes in basin, squeeze dry and lay them on a bath towel.

2: Roll up the towel.
3: Tread the towel for a minute or two to expel the water from your hydrophobic clothes into the welcoming towel. I wouldn't advice twisting the towel as this could damage your expensive Merino wool base layer.
4: Drape your almost dry clothes on radiators turned to Max and open windows slightly to reduce the resulting sauna to acceptable levels.
5: Hang the sopping bath towel from the wardrobe doors and hope it will dry to reasonable respectability by morning as all the radiators are taken. 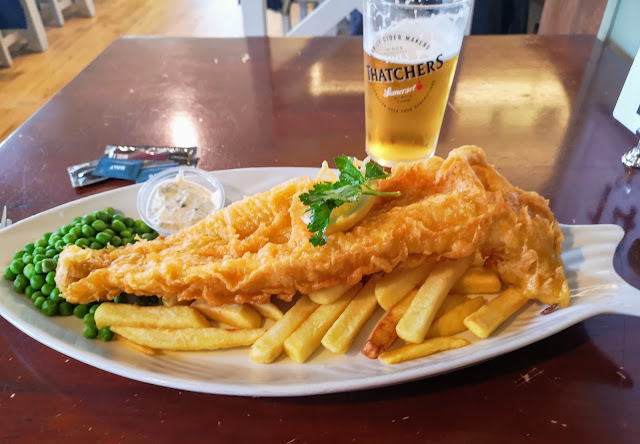 6: Head off to the Lock Inn for a few decent pints of cider and a haddock the size of a baby whale. 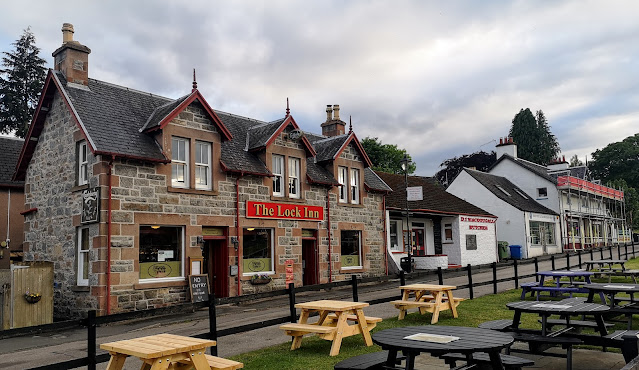 That, was a very surprising finish to today's walk. It was definitely not a big day but by the end I had really, really struggled. I spent the evening thinking about tomorrow.

Plucked from the ether by Alan Sloman on Saturday, October 23, 2021