Desmond Tutu is supposed to have once said "There is only one way to eat an elephant: a bite at a time." Strictly speaking, he wasn't necessarily thinking about my current predicament, but I'm pretty sure that if was sat by my side right now, that is the advice he would volunteer. You see, my previous two days had been a struggle and the second of the two really shouldn't have been. The first - the walk from Glen Affric over to Glen Moriston - had knocked me for six, and so I had struggled badly the next day.

Whilst working my way through my monster haddock last night I decided to follow my Foul Weather Alternative route today instead of scaling the ridge of the Monadh Liath and camping high. The high route had about a hundred extra metres of ascent and was two miles shorter than my FWA. However it committed me to a high route the following day, and if I wasn't going to feel too clever at the end of today's walk, I could see myself really struggling tomorrow.

I opted for the slightly lesser climb but longer day today, knowing that if I did feel rough I had only to walk out on easy terrain to a bit of civilisation the next day. However, the Corrieyairack Pass was still a pretty big undertaking for me as I'm obviously not at my best. To put this into context for readers who are not avid hill-walkers, you will probably have heard of the mountain 'Helvellyn' in the Lake District. You may indeed have scaled the beast in your youth, either with the Scouts or on a Duke of Edinburgh jaunt. It's a very long way up for anyone, being 950m above sea level. Today's climb is also an ascent of 970m, and I'll be carrying a rucksack full to the brim, with the newly added food parcel, and walking fifteen miles to boot.

Clearly, our Desmond's advice was the answer. Take it step by step, one bite at a time.

I left Rose Cottage at a sensible 8:30am and headed into town to buy some food for today - chiefly things that I would look forward to, like cheese and onion pasties and steak pies.

Take the scenic route to the start of the Corrieyairack Pass, via the graveyard - it's so much calmer than the busy A82 you're leaving, despite watching with glee as motorists hurtling down the hill towards the village are caught in a radar trap.
Pootling along a quiet lane takes you gently down hill to this signpost. Take its advice and walk with me over the Corrieyaircak Pass and beyond. You'll see (from the route profile on the above map) that before very long there's a pretty brutal looking climb. Fear not, Dear Heart! It's not a forty five degree climb - even though it may feel like it first thing in the day - as that's simply the distortion of the profile diagram. It is in fact the steepest allowed by General Wade for pulling the army's gun carriages up hills. Look again at the profile and you will see that there are three such gradients, the last being the longest and cruelest of all, to take you over the pass into the Spey River System. 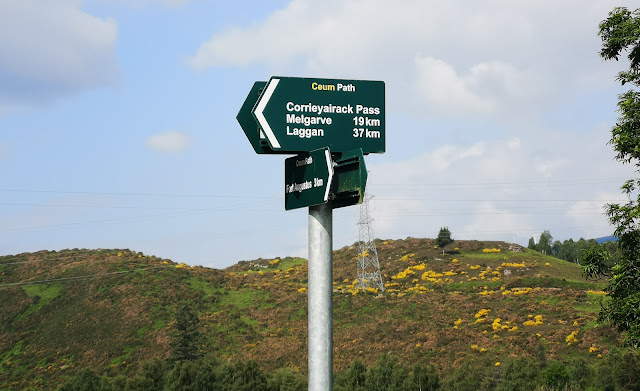 It's ten miles from my B&B to the top of the pass and it's well worth stopping often, to take in the views that are chiefly behind. In front it's rising ground and the never ending Wade road.
I'm unsure of the original purpose of the concrete hut in the next picture, but it appears to be an old store for explosives. There's a similar hut on the pylon route from Hilton Lodge to Torgyle Bridge. I think the explosives were used when constructing the original pylon line that has now been replaced by the upgraded Beauly-Denny line. It could prove a useful refuge in foul weather, if a tad draughty for Challengers having to get over the pass. If you were staying you'd need a weather-proof bivvy bag.
From the outset the new The Beauly-Denny 400kV pylon run was controversial. It replaced a far smaller pylon run because the SNP led Scottish Government was hell-bent on increasing wind energy from the Highlands of Scotland. I'm not going into the rights and wrongs of renewables in this blog post, but the upshot of the decision to build the new pylons was a massive increase in the construction of upland wind farms in the Highlands. To start with these upland power stations picked the low-hanging fruit for their locations - as close to the pylon run as possible to reduce the costs of transmission. They were met with massive local opposition, which was quickly stomped on by the Scottish Government by appointing a planning inspector, who invariably steam-rollered any opposition.
It was a massively one-sided fight and the new line was built and new wind farms proliferated all over the Highlands, destroying forever what, to all intents and purposes, had been wild land. The wind farms subsequently spread further north and west. It is an indelible black stain on Scotland's protection of wild land.
Here's a very shaky video of the view of wind farms from the climb up the Corrieyairack:
You can find out more about the Beauly-Denny line's planning and construction from the Scottish and Southern's Electricity Networks' site HERE with a few factual videos showing what was involved in its construction.
I had been playing tag with another Challenger since I had first spotted him at the burial ground at Fort Augustus and lastly near the Blackburn of Corrieyairack bothy. Latterly, with my snail's pace he had disappeared from view. He must have had a really good break at the top as that's where I came across him again.
Finally a view of the Spey Valley hove into view. At last I had a landscape I could walk into, and the beauty of whizzing downhill at last. I felt surprisingly good after a long climb, which boosted morale considerably. I made a mental note to eat more whale-sized haddock.
I love this next picture. If you were stood here around 12,000 years ago you would see a massive glacier filling the valley almost to the height of each bluff. Temperatures in the winters then were some 30 degrees Celsius colder than they are at present and in summer some ten degrees colder. It was known locally as the Loch Lomond Stadial and the glaciers were fed by an ice sheet that covered the Western Highland of some 9,000 square kilometres in extent. That last glaciation has left behind some fascinating geomorphological features such as half a dozen or so dircs slashed across the hillsides.
Dropping down to Melgarve I had a poke around but the bothy was very firmly locked. I decided to have a bite to eat and a large drink. I was thoroughly pleased with my progress and lack of knackeredness. At this point the other Challenger strolled past on his way down to Garva Bridge to camp. I keep saying 'other Challenger' to my huge embarrassment as we had introduced ourselves and I had and still have completely forgotten his name.
After three quarters of an hour or so I was on my way again to camp at a spot I had noted some years ago that I thought had looked promising. It was more than that. It was a wonderful spot. 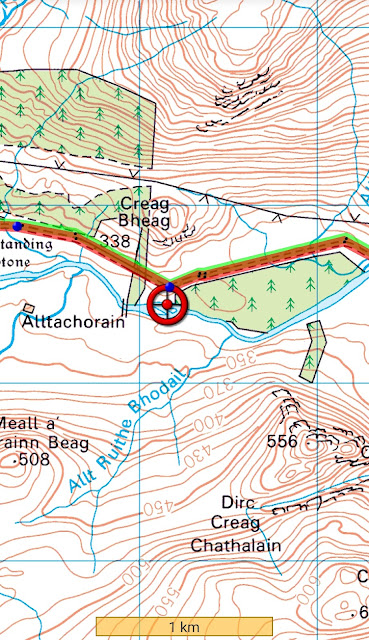 Perhaps I've regained a little fitness? Either way, I tucked into my food with relish that evening, having regained my Challenge legs at long last.

I slept early, knowing that tomorrow should hold no terrors and slipped into sleep very happy indeed.

Plucked from the ether by Alan Sloman on Wednesday, October 27, 2021