JUST HOW BAD CAN IT GET?

Some eight years ago my brother David gave me one of his kidneys. He quite literally saved my life.

In November 2020 I mentioned in this blog post that things weren't going quite to plan with the kidney. I needed another transplant and my sister Megan quite magnificently decided that she would again volunteer to donate one of her own. She had also made this offer eight years ago.

Then Covid-19 came along and the proposed transplant date of December 2020 - conveniently chosen so that I would be recovered enough to do the TGO Challenge the following May - was put back to later in the month because the hospital was dealing with the influx of Covid patients. It was then put back again to January but my kidney was failing faster than the operating theatres diaries could manage, and it packed up. This resulted in an emergency admission to Oxford Churchill whereupon they stabbed me in my groin with a sodding great needle for an emergency transfusion and dialysis. All well and good, you might think, until the needle came adrift in the night and I started bleeding from a main artery. I recall staring down at the young doctor who was trying in vain to stop the bleeding and thinking that I hadn't expected to go like this and had a fit of the giggles.

They gave up the struggle of keeping the needle in place and sewed it all up and in the morning jabbed me in the other side of my groin, but this time used a lot more sticky tape. This was replaced a few days later by going in through my jugular, down my chest and out again just above the nipple so that I could be given more blood and travel to Oxford for dialysis and EPO three times a week

To be frank, this was all a bit miserable.

The kidney is monitored, in the main, by lots and lots of blood tests, so I'm very used to being jabbed at all times of the day or night. Here are a few sets of results over a longish time frame that show how things after my first transplant in 2013 got significantly better and then suddenly went awry in 2020. 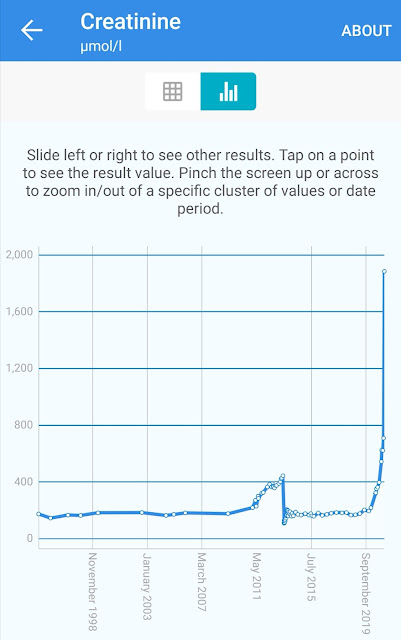 Creatinine is the best routine blood test for measuring how well kidneys are working. It's produced by muscles and put out by the kidneys. The 'normal' range for Creatinine for healthy people is between 60-110. Immediately prior to my 2013 transplant mine reached 445. It peaked this time at 1886. My consultant remarked that this was 'quite sporting.' 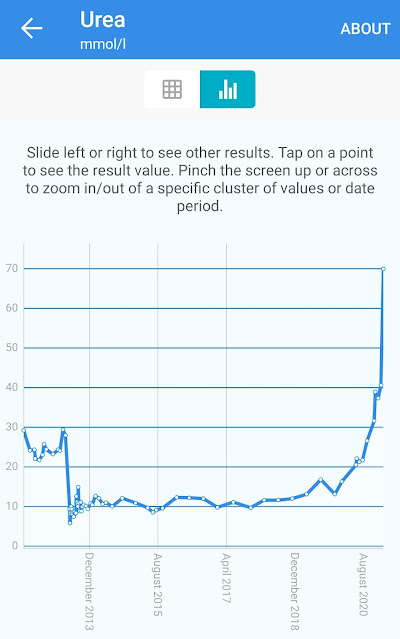 Urea is a small molecule produced from protein and put out by the kidneys. The normal range for Urea for healthy people is between 2.5 and 7.0. Prior to my 2013 transplant mine reached 29.4. This time it hit 70. I felt very unwell indeed at this point. 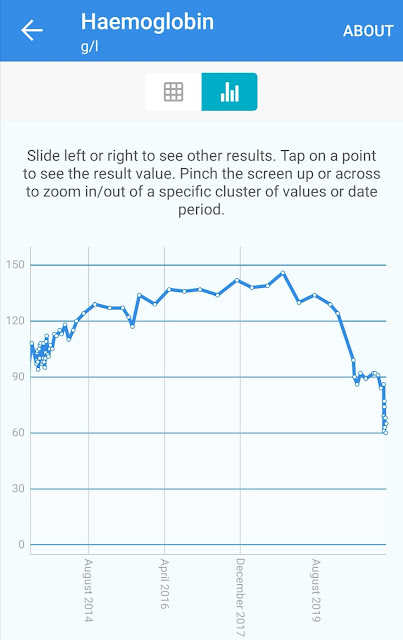 Blood count is next. Haemoglobin is the red stuff in blood. It fills red blood cells and carries oxygen around the body Normal is slightly higher in men than women. Men's results should typically be in the range 130-180. The kidneys produce a substance called erythropoietin (EPO) which stimulates the bone marrow to produce red blood cells. Loss of EPO production is usual in patients with advanced kidney disease, and may be severe. Loss of EPO production is a major cause of anaemia in renal failure Treatment with artificial EPO has been a huge advance for patients with renal failure.

There is one chart that gives a fair indication of how you're doing overall, the eGFR, the estimated Glomular Filtration Rate and loosely described gives the percentage efficiency of your kidneys. 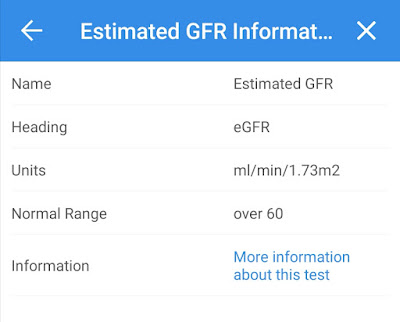 And here's what happened to mine: 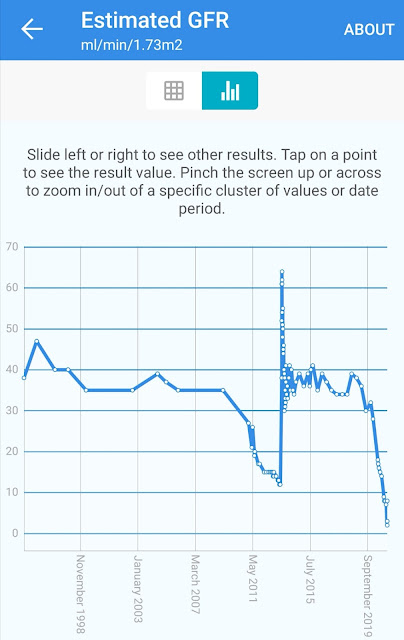 My kidney function dropped to about 2% efficiency. This was not good.

So - That was the bad news and Megan's kidney changed everything, just as David's had in 2013.

On March 15th of this year Meg was wheeled into the operating theatre first thing in the morning and around lunchtime as she was wheeled out, minus one kidney, I was wheeled in. I emerged in the evening the proud owner of four kidneys.

Throughout all this time, Phil was becoming more and more uncomfortable with a pretty major hernia that was now becoming a problem. However, his operation was also baulked by Covid and he had no clue when it was likely to be fixed.

He came down to Bracknell at the end of April when pubs were reopening and we spent a cold afternoon under a plastic Wendy House attached to the pub. I had been wondering if he was fit enough to have a bash at a low level route across Scotland, because by now my results were definitely on the up, getting better faster than I had expected. But it was obvious that it was just not a goer for Phil.

After Phil had driven away back up north, with slightly indecent haste I had the maps out and wondered if it was possible to rejig the route we had submitted all those light years ago to make a slightly easier route for a bloke cobbled together with spare parts and stitches.

When I realised it could be done I contacted Sue and Ali, the Challenge Coordinators, to see if this Cinderella could come to the Ball. They were jolly nice about it and agreed. I love those girls to bits.

All I had to do now was get fit - a bit of a problem that, as I hadn't done any exercise for months - find all my backpacking kit - some of which had been loaned to friends - and actually go for a walk across Scotland.

Actually, the getting to Scotland bit was to prove a bit of a problem, but we'll come to that in the next post.

Plucked from the ether by Alan Sloman on Friday, October 15, 2021