When I decide, finally, that it's time to get out of bed and start to pack things away, I know I'm in for a wrestling match with my beautiful bag. It's a monster and it has to pack down into its little stuff sack.

Three rounds with Mick McManus later, I start the fourth with Jackie Pallo, sorting out my mattress. By now the tent seems cavernous with just an assortment of dry-bags, map cases, wallets, food bags and all manner of stuff that I don't recall ever having seen before.

Before long I'm dressed, booted and picking up the pack. It's a quarter past seven so probably a little early for breakfast at the Station House and I stroll away, mightily relieved that this place has in effect put me back together again. I had slept the sleep of the dead and now I felt pretty damn good.

As was usual on this year's Challenge I was walking into the teeth of a keen wind that nipped at my nose, so battening down the hatches I escaped from my waking up stumble back into my long walk lope. There really is a profound difference in gait when you hit your stride; walking becomes a natural act with seemingly far less effort expended. Your mind escapes the mundane footfall forecast and frees itself up for flights of fancy.

The skull cinema plays clips from past Challenges: Mad'n'Bad decked out in party balloons bouncing from muddy wheel rut to muddy wheel rut, cursing the bastards of the Scottish Six Day Trials, followed by Lord Elpus plunging bollock deep into a bog, or Michael from Norn Iron passing round the poteen, celebrating the slowest three miles he had ever walked in his life. He had obviously never walked with Phil and me before, masters of the slow and easy plod.

Leaving the main track alongside the Loch to take the much improved path up to Peter's Rock, the scenery shifters suddenly burst into action. Whole new backdrops are hoisted skywards; looking forward Bealach Dubh bursts out from beneath a blanket of cloud, backwards and the Ben is seen, summit shrouded.

Still climbing gently after resting at Peter's Rock the fabulous Rannoch Moor is hoisted - a massive feat for the guys with the ropes. Every time I pass this way this view catches me almost by surprise. It's an intense feeling, suddenly catching a vast space. And today I'm on my own and it's very personal.
PANORAMA  - MAGNIFICENT OPEN COUNTRY
The next stretch is quite simply the best enjoyed miles in Scotland. For me, walked in either direction, it's an almost religious experience. If you've not been this way, make a plan for it right now. Find your closest friend and share the experience with them. I promise that you will never forget it.
And here's a gratuitous extra picture I took ten years ago when I walked this section with Mad'n'Bad Walker:
As I was taking this picture - which is a little tricky using a phone in heavy gusts of wind as it's nowhere near as stable as using an SLR - there was an almighty noise and I looked up to see an RAF Typhoon screaming overhead in a tight turn. Amazingly, I caught it dead centre in the frame. 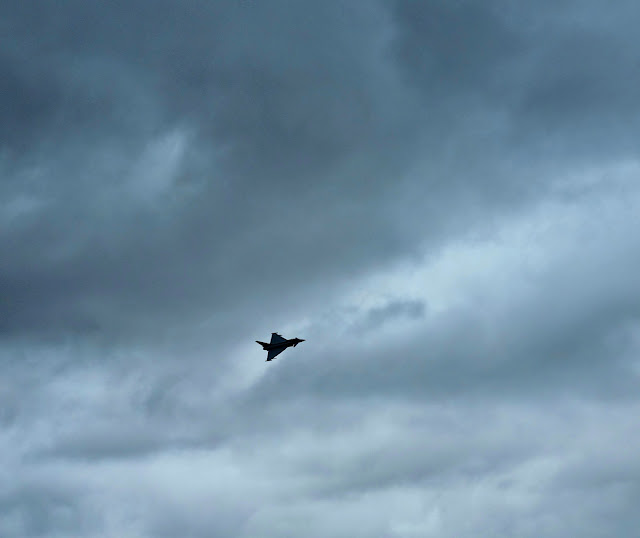 On the track down to the road I met a convoy of very smart off road vehicles climbing gently towards me. I chatted to a smart chap in the passenger seat and he explained that they were heading up for a photo shoot for a very well known outdoor brand. Everyone seemed to be decked out in Barbour. Keep your eyes peeled for a couple of gorgeous women and men in sporting poses carefully arranged in front of our scenery shifters' finest efforts in fashionable magazines the world over.

Even taking loads of snaps and a great many rest stops I was still running early, so I decided to have a break alongside the B846. If you were to have a break sat alongside a B road where I live in the south east of England you would choke on diesel and petrol fumes and be at risk of being crushed to death by HGVs and boy racers. Today, sitting here for about half an hour I think two cars passed me, and that was really the one car, heading up to Rannoch Station, a dead end, and back again after picking up some passengers.
I dined on peanut M&Ms washed down with Waitrose No. 1 Tawny Port: The snack of champions.
I have to say, today was the first day of the Challenge that I can look back on and honestly say I absolutely loved every minute.
The minor road walk to one of the best Dinner, Bed and Breakfast establishments in Scotland, the Bridge of Gaur Guesthouse, is gently downhill all the way until a fierce little kick at the very end. I was met with kindness, friendliness and efficiency. Heather and Eddie are magnificent hosts. Heather is also incredibly brave, taking my very stinky clothes and returning them in the morning beautifully clean and fluffy. This was only my second visit but each time it has been quite perfect.

Again, the food parcel proved to be an embarrassment as I still had so much food uneaten. I left more than half of the parcel with Heather to give away to hungry hikers or cyclists. I'm still not eating anywhere near enough.
Finally, my TGO Challenge mojo was back but even though walking a comparatively social route I had not met another Challenger apart from Graeme, who I walked with for barely a mile. That was pretty miserable.
RAW, AND HEARTFELT.
Plucked from the ether by Alan Sloman on Sunday, June 26, 2022