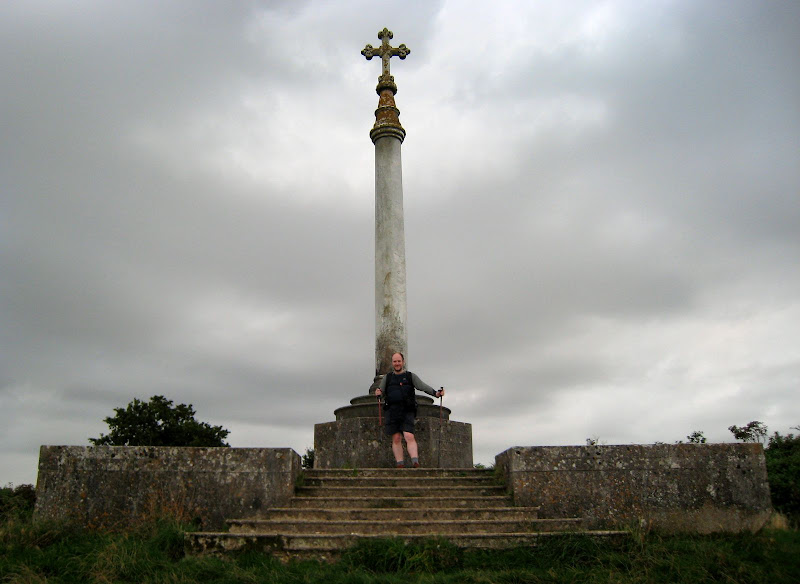 Lord Wantage and his memorial
At the fag end of Thursday, I was in touch with Darren Christie, who was all dressed up with no-where particular to go for the weekend, and arranged to meet up with him the following evening in a lay-by in the middle of sod-all north of the M4.

Having made sure Mum was alright at Wexham Park with her new hip (the old one having been broken) I made it through the traffic still feeling slightly below par from the previous evening's Safari Supper 'meeting'.

Darren was already there, all dressed up and with somewhere to go. Very sensibly he was kitted out in shorts and t-shirt and those trendy gym-shoes from Inov-8. Conversely, I was kitted out in trousers more suited for a wintry walk though the Cairngorms and a lovely thick woolly shirt and my big heavy Scarpa Nepals.

We had a spot earmarked for our unlawful wildcamp (just after a water tap) and scampered along, Darren chatting nineteen to the dozen.

It wasn't the free-flowing conversation that made me miss it; the tap just wasn't there, so we stopped at a suitable point on the Ridgeway (one with grass) and soon had the shelters up (Darren sporting a new Duo Tarp from Bob and Rose over at Backpackinglight.co.uk) and me with my beloved Wanda Warmlite. Darren excelled with his Bushbuddy and produced hot-dogs while I dished up a Ritta melange of beef, noodles and mushrooms flavoured with Big D's excellent single portion of Worcestershire Sauce.

We ate in the flickering fire-light of the Bushbuddy as below us and above Grim's Ditch, the farmer was combining his wheat-field by headlights. The lights of Wantage to the north were our light show and to the south the dome-glow of what we thought must be Newbury. Just before retiring, a cyclist scampered past by the light of his head-torch.

Plucked from the ether by Alan Sloman on Saturday, August 30, 2008