I thought I would start today's post with a flashback to when Phil & I spent the night at virtually the same spot on our Challenge in 2005. So here's a picture of Phil, carefree and thirteen years younger. You'll notice that in one hand he's sporting a can of lager and in the other my Sigg whisky flask. Perhaps that's the reason he's looking so cheerful... He was carrying a two man tent. He was right 'ard.


And so we come to today. There's great planning, and there's great planning, though I say it myself... Here's a tip for new Challengers: Always plan a readily achievable third day. It's on the third morning that you wake up, and it's invariably peeing down with rain, and it's thrashing in high winds against the side of your tent. You've probably been awake most of the night, wondering if your shelter is going to be in Montrose twelve days before it's due there. So you're knackered. your shoulders are sore from your pack because it's way too heavy and your legs ache because they're not used to clambering up forty five degree bogs for hours on end.

It's then that you realise that you've still got another twelve days of this madness and the world is looking like a very bleak place indeed. And, bloody hell. How far have you got to go today? Eighteen miles? Was I mad when I planned this?


Today's walk is a happily achievable 20km with just 250m ascent. And, wonder of wonders, the morning is to be spent walking up the delightful Glen Strontian, with carpet like grass, ambling up the river and, there's a proper bed at the end of the day, with pub food and a cooked breakfast seated on chairs at a table, and you don't have to eat everything with your spoon.

You can thank me later, chaps. No, no. it was nothing. I wouldn't hear of it. Oh, well, okay then, just a small glass...

The day then gets better still, as we collect the Fragrant Sue, and John who we last saw heading off into the wilds of North Ardnamurchan. It was a very happy group of five old bastards that strolled up the glen.

Just before the watershed, there's Lochan a' Chothruim to let you know that you're not lost and all is well.


And then the day becomes even more fabulous. Glen Gour is just bloody gorgeous. You have between two and three miles of the most beautiful river scenery in Scotland. Plashing water tumbling over angled polished strata, billions of bubbles that catch the light like diamonds, honey-coloured stone glistening through crystal clear, life-giving water. Deer-trods to guide you along the soft earth banks.

Glen Gour is fabulous. Don't take my word for it. Plan your route to take you there one day, hopefully for your third easy day to the Corran Ferry, a couple of pubs, comfy beds with cool white cotton sheets.

You're there already, aren't you? I'll let the pictures do the talking for a while. Click on them. Blow them up to see the water, the life.

Your heart will probably leap, just a little, when you notice a Rover Road marked on the map, so you ease your way over to the other side of the glen to collect it. In fact it's a sad thing, stony, waterlogged and unloved in paces and certainly no match for your earlier stroll along the river banks. But, it's fairly direct, but you're away from the life force of the river and so dull, dull, dull. The view forward is rather splendid though - some compensation.


I was very lucky to be walking with John at this point, as the frequent flooded sections of the track were alive with Palmate Newts and John's a bit of a Gussie Fink-Nottle when it comes to newts. We dragged way behind the others as the little creatures were photographed and examined in minute detail by John. It's amazing what you learn from other Challengers. I almost turned into a newt-fancier myself today.

It's then but a stroll to the road, and, delightfully, beautiful fresh deciduous trees, bursting with vibrant colour and new life. 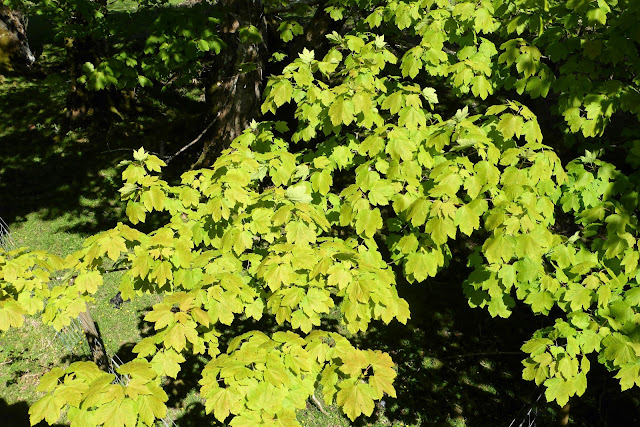 The next section isn't pretty, it has to be said. It's along a fairly fast section of main road, but we diverted off for a poke around delightful Clovullin where the general store was shut for the afternoon, it being Sunday. People were out and about, cleaning windows and tidying gardens in the glorious sunny afternoon. It's a little sanctuary of calm, beautiful trees and general tidiness.

It was then just a question of a few pints of re-hydration in the pub before taking the free ferry across to the other side. There's a fair old rip current flowing through the Corran Narrows and so we crabbed our way across to the East Side and our B&B, food parcels, another pub, a shower and lots of washing of smelly socks, pants and shirts.

Hmm. Back to reality after three days of blissful escapism. And so it goes.

Plucked from the ether by Alan Sloman on Wednesday, April 24, 2019