As some may already know I've had a second kidney transplant - I'll write about this in a separate post.

Back at the beginning of January, Phil and I had a chat about the probability of us being fit enough for the Challenge this year. I was due a kidney transplant that, due to Covid had already been cancelled once and was likely to be cancelled again. Phil was also due an operation to keep his innards where they should be - inside, rather than making a bid for freedom. His operation was due in May, but again, with the Covid situation it was likely to be put back again.

We decided, rather glumly, to defer our entry to next year and so pulled out of the Challenge.

As it transpired, this was a very wise move for Phil, as at the moment the earliest date they are hoping for is September, so Lord only knows how he's keeping it all together. We went for a leak test the other week to the Bull, where we sat outside in the cold, under a plastic tent drinking lager as it poured down with rain. This is what passes for fun these days. 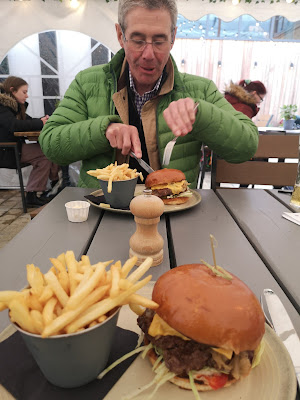 After three cancellations I finally had my kidney transplant (donated by my littlest sister, Megan - more on her in another post) on 15th March, after my kidneys finally packed up and having to endure two months of dialysis three times a week.

A week or so ago I was well enough to resume working and had started to take walks of up to six or seven miles in reasonable comfort. That meant there was seven weeks to the TGO Challenge - now held at the back end of June rather than the customary first two weeks in May - and I realised that I had a really good chance of being well enough and fit enough for the Challenge.

Ali and Sue - the Challenge Coordinators - are absolute darlings and allowed this Cinderella to go to the Ball! This entailed a new frock, obviously and some dainty glass slippers. I substituted a lightweight coat for the dress but I'm struggling to find *any* glass slippers suitable for the Monadh Liath and Cairngorms.

A quick check on the accommodation Phil had booked for us and subsequently cancelled when we withdrew from the event, found that quite a few establishments were now booked up. This meant that the first week's route wasn't feasible now as the available resupply points became too far apart for a comfortable carry. I went back to the drawing board and re-jigged the route for the first week, ensuring that I would never be carrying more than three days worth of food. This meant changing my start point from Dornie to Sheil Bridge.

Whilst re-jigging, I've been playing around with the gpx route files (for the oldies amongst the congregation, I have computer mapping) and realised that I can export them into Google Maps. This means that viewers can zoom in and out to their hearts' desire and take a look at where I'm going in some detail. I wonder how long it will be before Google mapping will become a serious contender to the monopolistic Ordnance Survey for walkers?

Anyway, for what it's worth here's the link that will take you to the Google Map that I've created with the route and all the FWA's plastered all over it. If you hover your mouse over each day's route, it is highlighted and shows the distance travelled that day.

Click on the link below for hours of mindless fun.

And finally, in the spirit of Old Mortality: